Hunter Biden, the son of former vice president and Democratic 2020 presidential hopeful Joe Biden, said his service on a Ukraine gas company board was proper but may have been a bad idea in hindsight.

"In retrospect, I think that it was poor judgment on my part," Hunter Biden said in an ABC News interview aired in the US on Tuesday, in his first public comment since he became the target of allegations from President Donald Trump. "Did I do anything improper? No, not in any way, not in any way whatsoever." 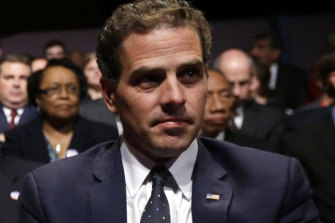 Hunter Biden is stepping down from the board of a Chinese company that has been the subject of criticism from Trump and his allies.Credit:AP

Trump and his personal lawyer, Rudy Giuliani, have repeatedly made discredited claims that Joe Biden used his position as the Obama administration's point person on Ukraine to help quash an investigation in 2016 into the owner of one of the country's largest private gas companies where Hunter sat on the board.

Trump's efforts to get the newly elected government in Ukraine to investigate the Bidens are at the centre of an impeachment inquiry now being conducted by the House.

"I joined a board, I served honourably, I focused on corporate governance," Hunter Biden told ABC. "I didn't have any discussions with my father before or after I joined the board, as it relates to it, other than that brief exchange that we had."

Hunter Biden served a five-year term on the board of Burisma, the owner of which had been under investigation for alleged money laundering and abuse of power. The allegations predated his joining the board in April of 2014. He stepped down earlier this year.

"Was it poor judgment to be in the middle of something that is a swamp in many ways?" Hunter Biden said in the interview. "Yeah. And so I take, I take full responsibility for that." 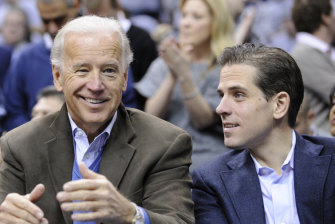 Former vice-president Joe Biden and his son, Hunter, in 2010.Credit:AP

He also said that while the Biden name has probably helped professionally during his life, there has been "a lot of misinformation" about his qualifications for his role on the board of the gas company.

A graduate of Yale Law School, Biden served as vice chairman of the board of Amtrak from 2006 to 2009. He's also worked for the law firm Boies Schiller & Flexner LLP.

"I think I had as much knowledge as anybody else that was on the board," he said.

In a statement released through his attorney on Sunday, Hunter Biden said he would resign from the board of a BHR (Shanghai) Equity Investment Fund Management Company, a Chinese-backed private equity company, and promised to forgo all foreign work if his father's elected president.

He's also disputed Trump's repeated unsubstantiated allegations that he procured $US1.5 billion ($2.2 billion) from BHR after he flew on Air Force Two with his father in December 2013 to Beijing.

Trump's claim that Hunter walked away with $US1.5 billion from China appears to be based on a fund-raising target that BHR announced in 2014. But BHR never raised a discreet pool of capital, according to the statement from his attorney on Sunday, and instead raised money deal by deal. BHR now says it manages about $US2.1 billion in investments.

Biden denied he played a role in forming the company or having any equity in it while his father was vice president. The board position was unpaid, he said. After his father's term ended in 2017, Biden bought 10 per cent of the management company for about $US420,000. He hasn't made money from the venture to date, according to the statement.

He announced he'll resign from the BHR board by October 31.