Tampa: Hurricane Ian, projected to be one of the costliest storms in US history, prompted mass evacuations, school shutdowns and thousands of flight cancellations across the third-largest US state.

The storm, which has already battered Cuba, has top winds near 120 mph (193 km/h) as it swirls over the south-eastern Gulf of Mexico, about 338 kilometres from Punta Gorda, Florida, according to an advisory from the US National Hurricane Centre at 6pm New York time. 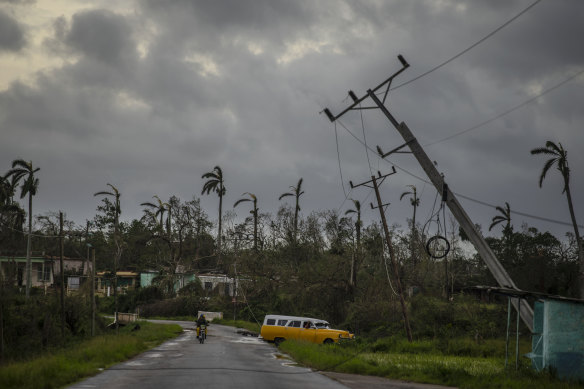 The storm is forecast to strengthen through Wednesday, bringing threats of two-metre storm surges into Tampa Bay and heavy rains across the US south-east.

Local media broadcast video of interstate highways jammed with cars and trucks attempting to flee vulnerable cities and towns along Florida’s western coast. Damages and economic losses in the area could exceed $US45 billion if the current forecast comes to pass, said Chuck Watson, a disaster modeller with Enki Research.

That would rank Ian as the eighth-costliest US hurricane, according to data from the National Oceanic and Atmospheric Administration. Earlier estimates were higher when it appeared Ian was going to make a direct hit on Tampa.

The storm comes as climate change fuels extreme weather worldwide, including hurricanes that rapidly gain strength as they approach land. The year has already brought deadly flooding in Kentucky, a European heat wave that killed more than 2000 people in Portugal and Spain, and more relentless drought gripping the Western US and a major hurricane that left catastrophic damage from Puerto Rico to Atlantic Canada — each disaster exacting its own human and financial toll. 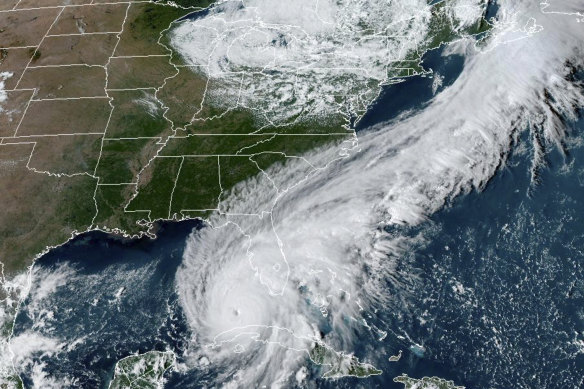 Hurricane Ian over the Gulf of Mexico.Credit:NOAA

Hurricane force winds extend outward up to 65 km from the centre and tropical-storm strength winds reach out 225km, the agency said. The Florida Keys should feel the wind starting later Tuesday. Some parts of central Florida could get two feet of rain.

Ian’s winds are still forecast to peak at 200 kilometres per hour in the next 12 to 24 hours, making it a Category 4 storm on the five-step, Saffir-Simpson scale, the hurricane centre said. Landfall is expected late Wednesday.

Ian already triggered floods and blackouts Tuesday when it made landfall as a Category 3 storm in western Cuba, the heartland of the island’s tobacco industry. The storm ripped off roofs, uprooted trees and flooded streets, with most of the damage concentrated in the westernmost province of Pinar del Rio. The Havana electric company was forced to shut down service to the capital at about 1.30pm local time after the storm knocked out power to more than 70 per cent of the city. 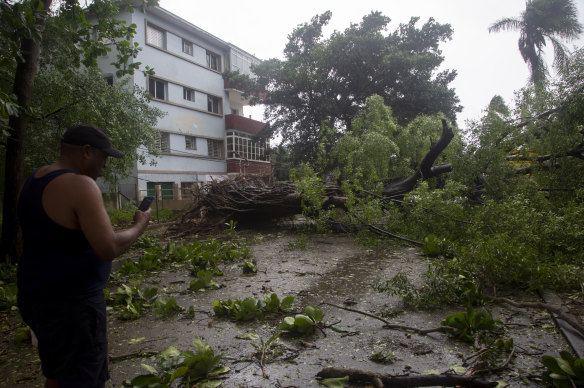 A man checks his mobile phone as he stands next to fallen trees bought down by the winds of Hurricane Ian, in Havana, Cuba.Credit:AP

President Joe Biden told media at a Washington, DC event that he approved Florida requests for emergency assistance. The Federal Emergency Management Agency has deployed 700 personnel to Florida and its governor activated 5000 from the state’s National Guard with another 2000 expected from other states, Biden said.

About 2.5 million people along Florida’s Gulf coast were urged to evacuate in advance of Hurricane Ian, Governor Ron DeSantis said in a Tuesday afternoon briefing. Residents should brace for a major hit that could bring historic storm surge Wednesday, he said.

Tampa and the surrounding region has been preparing for the storm, with evacuation orders now in place along the western shoreline. Ports around Tampa, St. Petersburg and Manatee have been closed, according to the US Coast Guard.

Duke Energy Corp., which supplies electricity to 1.9 million customers in the state, warned of extended power outages. Tampa Electric said it would proactively cut power to low-lying areas of downtown Tampa to avoid saltwater damage to its equipment, but later walked that back after the storm’s projected track shifted. 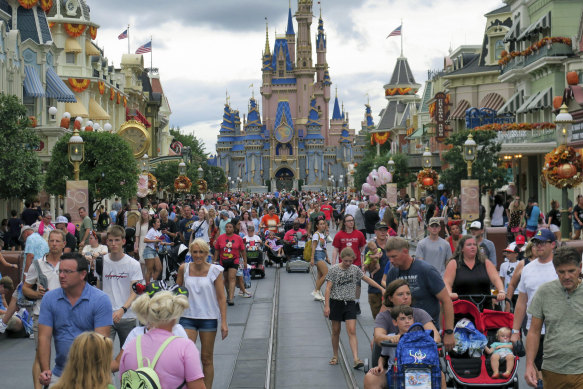 The Magic Kingdom at Walt Disney World evacuates ahead of the hurricane.Credit:AP

Walt Disney is shutting down its Florida theme parks on Wednesday and Thursday, while SeaWorld Entertainment Inc. closed Busch Gardens in Tampa through September 29.

Tampa International Airport announced a 5pm suspension of operations and American Airlines Group Inc. issued a travel alert for 20 airports in the western Caribbean and Florida. Orlando International Airport was set to halt flights of 10.30am on Wednesday. Airlines have cancelled more than 2,800 flights for the region through Thursday.