A 40-year-old man has been charged with murdering his wife and six-year-old daughter in a stabbing attack in suburban Melbourne.

Victoria Police on Tuesday confirmed they had charged Prabhal (Raj) Sharma with two counts of murder. They said he remained under police guard in hospital. 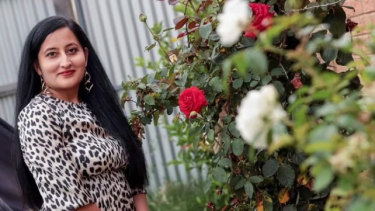 Police allege Mr Sharma stabbed his 39-year-old wife, dental nurse Poonam Sharma, and their six-year-old daughter, Vanessa, at a home on Kellaway Crescent at Mill Park in Melbourne’s northeast about 7.50pm on January 13.

Homicide Squad Detective Inspector Dean Thomas said earlier this month Ms Sharma fled to her neighbour’s house for help, allegedly pursued by her husband. She left blood on the neighbour’s door in her futile hunt for safety and later died.

Vanessa’s stab wounds were also serious, and she later died in hospital. The six-year-old’s sister, Angela, 10, managed to flee the incident without physical injury.

Neighbour Abdul Husseini said he had been at a nearby park when his wife alerted him to what was unfolding outside their home, with Ms Sharma screaming and trying to get assistance along with one of her daughters.

“They were crying and calling for someone to help – there was no one on the street. The woman came out covered in blood,” he said. “My wife is a bit scared now after seeing everything.”

Another neighbour reported seeing a woman covered in blood, crying and calling for help. Others said they heard a loud scream in the street before ambulances arrived.

Police alleged that when they confronted Mr Sharma, he turned the knife on himself, before he was taken to hospital under police guard.

“They engaged with that male and as a result, that male proceeded to injure himself and police had to take affirmative action and take him into custody,” Inspector Thomas said earlier this month.

“We are not looking for anyone else in relation to that particular incident.”

Victoria Police said Mr Sharma would face the Melbourne Magistrates Court, but did not reveal a date.

With Ashleigh McMillan and Mathew Dunckley