There is, in a decent society, a vessel of rights that we hold throughout our entire life. Rights that are not created in some legal sonic boom at one undefined point of our existence nor switched off like the power to a fridge because of a fear or a confusion as to the worth of their contents.

Rights, that though you may be unaware of them, apply equally to the person who has unlimited resources and has been blessed with the greatest luck in the random draw of life, and to those who have been less fortunate. Rights such as the right to liberty and the right to habeas corpus. 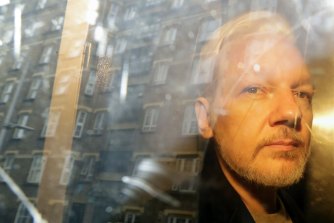 Julian Assange is taken from court in London in 2019.Credit:AP

A decent society makes the investment to uphold everyone’s basic attachment to this vessel of rights. You can judge a society on whether the protections and enforcement of these rights is actively pursued by the state in a form where all are truly equal.

In a liberal democracy, care must be taken to avoid laws that stumble around how basic rights may come and go. How a state deliberates over one person’s rights is an indication of the clarity, consistency and authenticity it applies over all.

Julian Assange is a current case in point. As an individual, whether you like him or despise him, it is beyond him, given his circumstances, to protect his rights by himself. So we must hope for the British courts to do so, and we will judge its society accordingly.

I have never met him and, from observation, don’t respect him. I presume I would not like him. And I view these facts as a clarion call to be all the more vigilant that he is treated just as one of my most powerful colleagues or dearest friends would be.

It is a case of how our citizen is protected and judged. Imagine a sliding door moment, and it was not Assange but you who was in court in Britain.

The Assange issue inspires so much rhetoric, so much totemism, screams from the choir and three-minute diagnoses. To look at it clearly, you must leave your uninformed preconceptions at the door of the high-colour sideshow. You must also set aside the grave issues that surround the actions of Assange. They are a separate matter to the key issue: where was this individual when he was allegedly breaking US law for which the US is now seeking his extradition from London?

Assange did not steal any US secret files, US citizen Chelsea Manning did. Assange did publish them. In Australia, he received a Walkley Award in journalism for it. Assange was not in breach of any Australian laws at the time of his actions. Assange was not in the US when the event being deliberated in a court now in London occurred. The question is then: why is he to be extradited to the US? If he insulted the Koran, would he be extradited to Saudi Arabia?

What country was he a citizen of at that time; what does it mean to be a citizen, and what rights therefore attach to it? If we are content that this process of extraditing one Australian to the US for breaking its laws even when he was not in that country is fair, are we prepared therefore to accept it as a precedent for applying to any other laws of any other nation to any of our citizens?

I have no power in Britain or US over these matters. I have no standing in the British courts. But in that birthplace of the common law, I hope the learned come to a just conclusion. They should try him there for any crime he is alleged to have committed on British soil or send him back to Australia, where he is a citizen. I am isolated in a room in Washington with an as yet undetermined variant of COVID-19, but have been asked back in Australia if my previous position on this matter remains the same. It does, and I hope this gives my reasons why. I hope it shows I am consistent on such matters.