Inflation has been a persistent nightmare, and rising rents nationwide are partly to blame. Unfortunately for renters, things are unlikely to get better this year.

“No quick relief in rent increases,” Alan Detmeister, a senior economist at UBS, told Yahoo Finance. “Probably not getting too much worse after the early next year [or] probably peaking early next year but then a long slow, downward pace on rent increases and still staying high through at least the end of 2024.”

The rental inflation issue is related to the larger inflation picture amid the pandemic.

Early in the pandemic, American interest in buying homes surged as COVID-19 spread and mortgage rates were at historic lows. Home prices soon followed, pushing some buyers out of the market and back into renting.

That trend intensified this year as the Federal Reserve raised interest rates to cool demand in areas such as the for-sale housing market, with higher mortgage rates sidelining more would-be buyers and sending rents even higher.

“As the challenges for home buyers start to increase at this higher interest rate environment, we will see more people remain in rental markets for longer,” Zillow Chief Economist Skylar Olsen told Yahoo Finance Live. “They’ll have to save up or downsize expectations in order to access home ownership with a lower debt load in order to avoid the impact of higher rates. And so that means you rent for longer.”

Zumper’s National Rent Index hit another record high in July — with the median monthly price for a newly listed one-bedroom apartment climbing to $1,450, up 11% from a year ago.

And while New York City remained the most expensive city in the U.S. for rentals — the median cost of a one-bedroom apartment in the city came in at $3,780, according to Zumper — demand is also hot in more affordable markets in places like Tennessee and North Carolina “as people continue migrating to these states in search of more space and friendlier cost of living.” 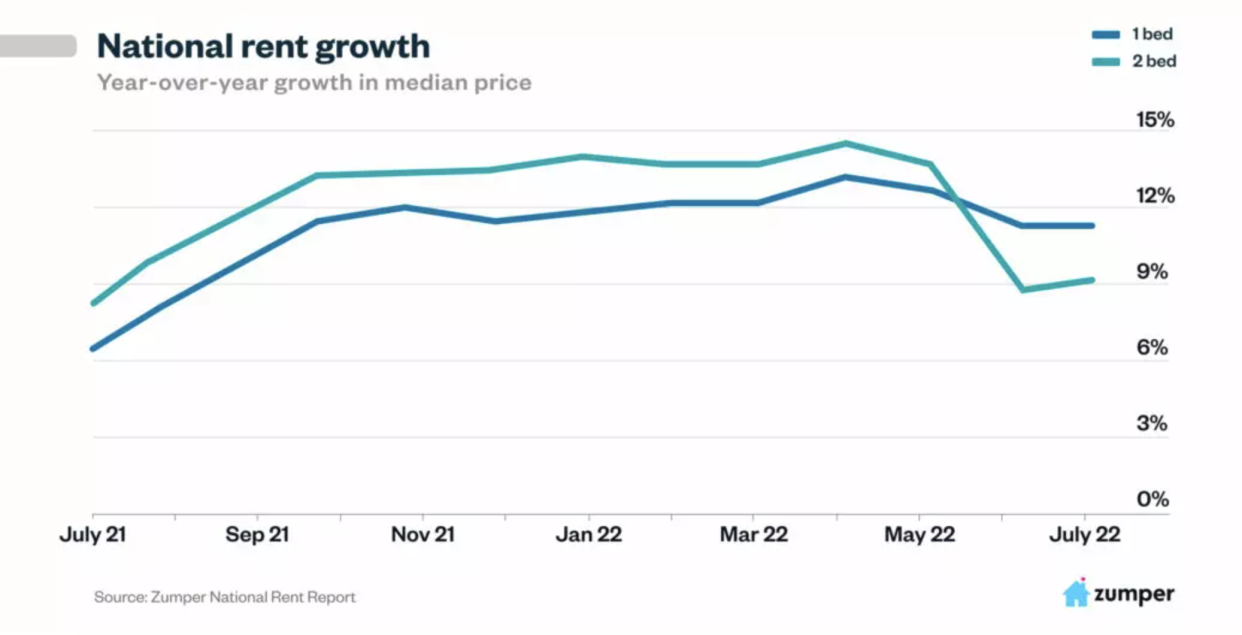 And while some components like energy were a big part of that increase, “rental inflation also has been strong,” Daniel Silver, an economist at JPMorgan, wrote in a recent note to clients.

Silver added that “it is important to monitor given its tendency for persistence and its large weight in the CPI’s basket.”

The Bureau of Labor Statistics assigns significant weight to the CPI’s “shelter” component, which is derived from rent costs as opposed to housing prices. According to the index, rent prices climbed 0.8% month over month and 5.8% over the past year.

Silver noted that “with rental inflation… softer than headline inflation in June, it has accounted for only about 20% of the overall jump in consumer prices despite a 32% weight in the basket.”

Changes in rents over time, as measured by Zillow’s Observed Rent Index (ZORI), suggest that “a decent portion of shelter inflation is already ‘baked-in’ for the remainder of this year given the delayed passthrough of such spot rental rates to the stock of rented units,” Silver wrote.

Olsen said that “rental markets moving forward will continue to experience strong demand. Though we do see early stages of rent slowing down from maybe the high highs, I think moving forward, we still expect a lot of pressure in that market.”

Detmeister noted that the situation is somewhat better for existing tenants compared with new ones.

“People who are staying in their place are not seeing the pace of rent increases that people who are moving in are seeing,” he said. “And that’s particularly true in the non-professionally managed sector, which is roughly half the rental stock out there.” As a result, rents haven’t cooled down.

Download the Yahoo Finance app for Apple or Android