Ireland now has highest coronavirus infection rate in the world with 10,100 confirmed cases per million people in the last seven days as health chiefs warn hospitals are ‘beyond strain’

Ireland now has the highest coronavirus infection rate in the world, with 10,100 confirmed cases per million people being recorded in the last seven days.

The Irish premier said the new mutant strain of the virus found in south-east of England ‘has had a significant impact on transmission’ in Ireland.

The country’s hospitals are now ‘beyond strain’ as a result of the surge in Covid-19 cases and subsequent hospitalisations, the head of Ireland’s health service provider said today.

The stark warning comes as Prime Minister Micheál Martin said he is ‘not ashamed’ of the government’s handling of Covid-19 before Christmas following criticism over parts of the economy opening up. 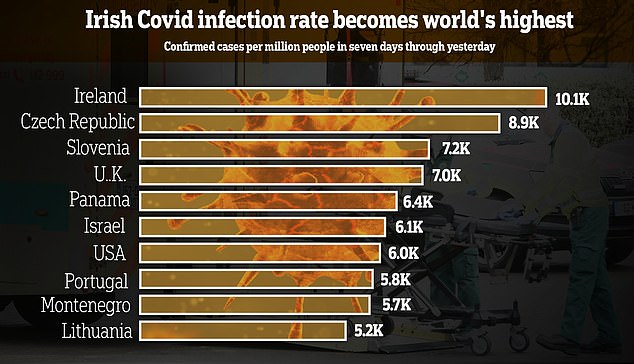 Ireland now has the highest coronavirus infection rate in the world, with 10,100 confirmed cases per million people being recorded in the last seven days

The data, released by John Hopkins University in the US today, showed Ireland has the highest Covid-19 infection rate in the world, with 10,100 confirmed cases per million people recorded in the last seven days.

The Czech Republic follows as the second worst country in the world for coronavirus cases, with 8,900 infections per million people.

Ireland’s chief medical officer Dr Tony Holohan said the new variant found in the south-east of England had accounted for 45 per cent of the most recent 92 positive coronavirus tests, according to Mr Martin.

Figures show the mutant strain of the virus is beginning to increasingly wreak havoc in Ireland, as the strain accounted for a smaller 25 per cent of those tested in the week up to January 2 and nine per cent two weeks earlier. 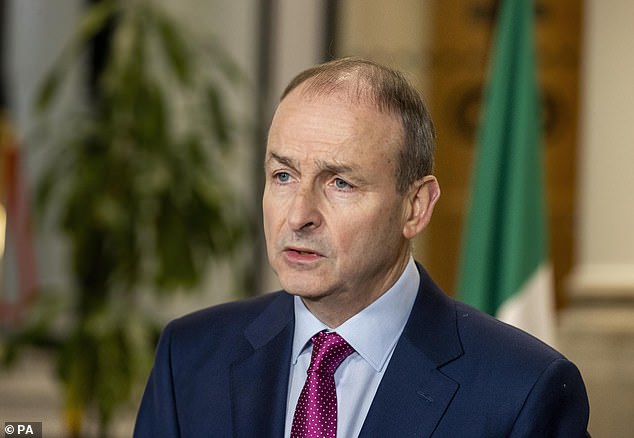 Speaking on Newstalk Radio, the Prime Minister refuted claims that his government sent mixed messages by opening up parts of the economy such as restaurants and gastro-pubs during the festive period.

‘It’s not as simple as that. We had been in a very prolonged period of restrictions of one kind of another and coming into December period we had six weeks of Level 5.

‘The socialisation that emerged in December alongside the new variants, and as Prof Paul Moynagh pointed out, don’t underestimate the seasonality of this virus.’

Mr Martin said it was clear to his government that towards early December, the public’s patience with the lockdown restrictions was at a low and ‘compliance was weakening’.

The premier disputed claims that his lockdown measures, where travellers entering Ireland during the festive season did not have to produce a negative coronavirus test result, did not work.

Mr Martin instead insisted that ‘the measures worked’ because the infection rates were low in early December, adding it is ‘very difficult’ to seal the border.

But now the country is experiencing surging cases of coronavirus and hospitalisations, leading to health officials to warn the public to stay at home. 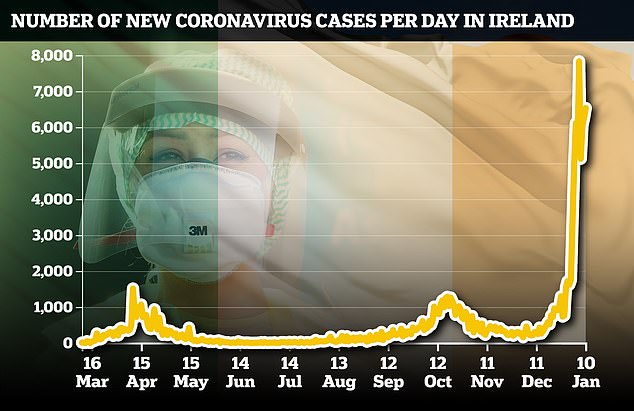 The number of people testing positive for coronavirus in Ireland has risen sharply to 6,532 yesterday, a huge increase from the 834 cases reported on Christmas Day 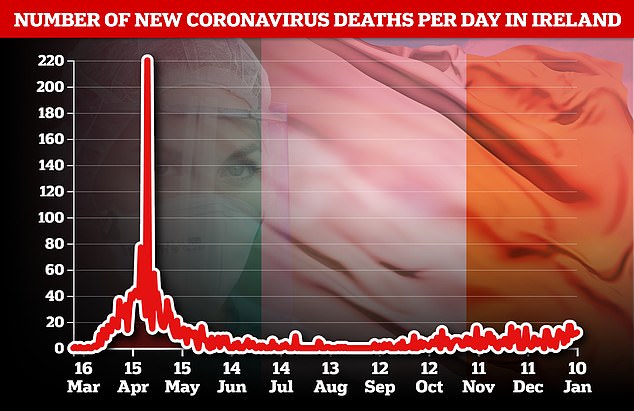 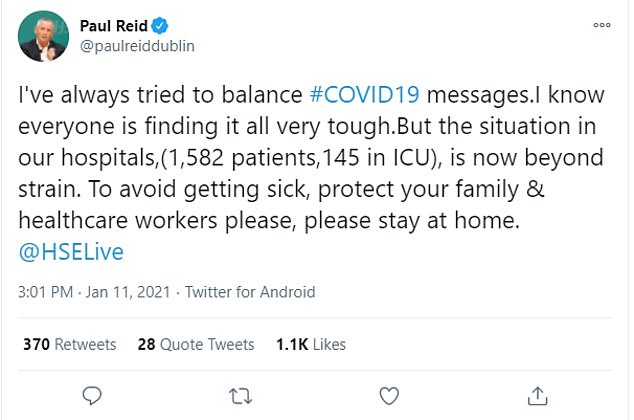 The country’s hospitals are now ‘beyond strain’ as a result of the surge in Covid-19 cases and subsequent hospitalisations, the head of Ireland’s health service provider said today

The number of people testing positive for coronavirus in Ireland has risen sharply to 6,532 yesterday, a huge increase from the 834 cases reported on Christmas Day.

The number of patients in hospitals with COVID-19 rose by 10 per cent from Sunday to 1,582, almost twice the peak set during the first wave of infections.

‘I’ve always tried to balance COVID-19 messages,’ Paul Reid, the head of the Health Service Executive, said on Twitter. ‘I know everyone is finding it all very tough.

‘But the situation in our hospitals is now beyond strain. To avoid getting sick, protect your family and healthcare workers please, please stay at home.’

She said dire predictions made last March about the potential pressures the region’s health service could face were now coming true. 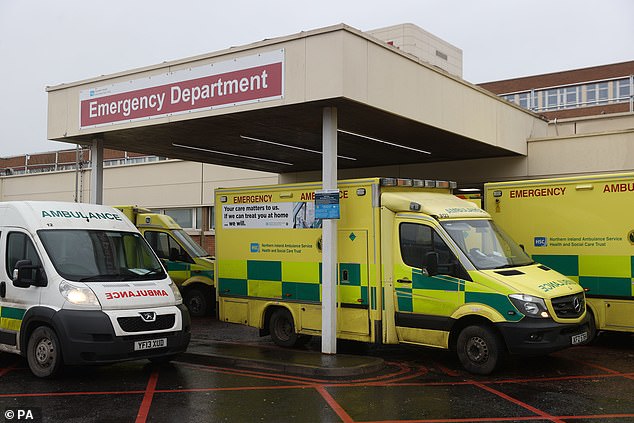 Dr David Robinson, director of hospital services at the South Eastern Health Trust, said the third wave of the pandemic is expected to be the worst, and is coming ‘very soon’. Pictured: Craigavon Area Hospital which was nearly swamped with cases at the weekend

Her stark assessments came after health chiefs warned that the number of Covid-19 patients being treated in hospital could double by the third week in January.

Dr David Robinson, director of hospital services at the South Eastern Health Trust, said the third wave of the pandemic is expected to be the worst, and is coming ‘very soon’.

Hospitals across Northern Ireland are preparing for the third surge of the coronavirus pandemic – which is expected to be the worst.

On Monday morning there were 69 Covid-19 positive patients at the South Eastern Trust, mainly at its Ulster Hospital site, close to the peak of 73 during the second surge.

The intensive care unit at Ulster Hospital had ten patients on Monday, half of whom were positive for Covid-19.

The hospital’s ICU capacity is currently 16. When this capacity is reached, patients will be transferred to the Nightingale facility at Belfast City Hospital. 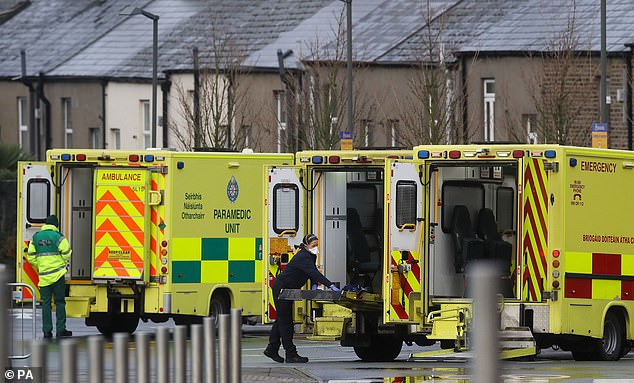 Paramedics and ambulances at the Mater Hospital in Dublin, Ireland on January 6

The Trust’s director of nursing Nicki Patterson said she expects the coming weeks to be the most challenging of her 37-year career.

She urged the public to follow the public health messages, for people to behave as if they have coronavirus and minimising contacts, exercising social distancing as well as washing their hands frequently.

‘The service is here for you, but for those who don’t require an emergency service or a hospital, we’re appealing that people make (a) measured judgment,’ she said.

‘In the incoming weeks, unfortunately we are not going to be able to care for everyone in the way we would normally want to, but we will do our very best.’

She also reassured those unable to visit loved ones in hospital that staff will be there for them.

Northern Ireland’s hospital network came under intense pressure at the weekend with two health trusts being forced to issue appeals to off duty staff to report in to work.

The situation was the most extreme in the Southern Trust area, where Covid-19 infection rates are currently highest in Northern Ireland. 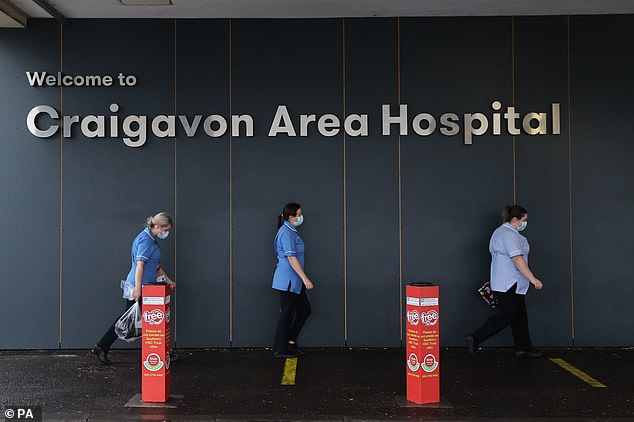 Over the weekend, Craigavon Area Hospital and Daisy Hill Hospital in Newry were in danger of being swamped with new cases

Over the weekend, Craigavon Area Hospital and Daisy Hill Hospital in Newry were in danger of being swamped with new cases.

Off duty staff coming in to help treat the influx of patients helped avoid the declaration of a major incident.

Enniskillen’s South West Acute hospital in the Western Trust area also asked off duty staff to report into work in case there was a need to start receiving inpatients from the Southern Trust.

Patient diversions to Enniskillen were ultimately not required.

‘I think the developments over the weekend whilst they were predicted are still very stark and very alarming,’ said Ms O’Neill.

‘We are at the extreme of the pandemic right now, this is the worst situation that we have been in from the very onset.

‘I think we’re now witnessing this scenario which was predicted to be the worst case scenario way back in the early part of March last year but now it’s a real lived experience.’ 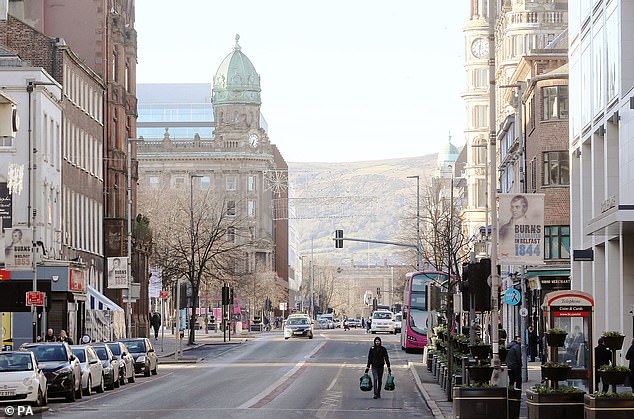 Ms O’Neill told BBC Radio Ulster that she could not rule out a potential extension of the region’s current lockdown which is due to end in the first week of February. She said all options remained on the table.

‘All of the predictions indicate that we’ve probably reached the peak in this wave of the number of new cases,’ she said.

‘But we certainly haven’t reached the peak yet in terms of the pressure on the health service. And the next number of weeks is going to be a huge, huge effort from all those people who work in the health service on the frontline.’

‘If you look at the number of positive cases whilst they are still too high they have gone down from the peak of what you will recall was over 2,000 cases and yesterday I think we had 1,112 positive cases,’ she told Radio Ulster.

‘So while the cases are still high, the assessment is that we are past the peak of cases but of course then there is a lag then in terms of hospital admissions and that is very concerning to see that we are now at 703 Covid inpatients in our hospitals.’

A further 16 Covid-19 linked deaths and 759 new cases of the virus were confirmed in Northern Ireland on Monday.