Is this the smallest cycle lane ever? Residents left baffled by ‘ridiculous’ seven-foot stretch for bicycle users which they say is an ‘accident waiting to happen’

A father has been left baffled after his local council installed ‘the smallest cycle lane ever’ on a busy main road.

Ray McSharry was walking along King Cross Street in his hometown of Calderdale, Halifax, on January 17 when he thought he spotted ‘graffiti’ on the side of the road.

However, upon closer inspection, Mr McSharry realised that he was looking at what appeared to be a shrunken bicycle lane, or the cyclist’s version of a lay-by, which was only around seven-foot long.

The puzzled 65-year-old uploaded a photo of the bizarre roadside addition in a local Facebook group asking if ‘any members of the council’ could elaborate on this ‘ridiculous scheme’. 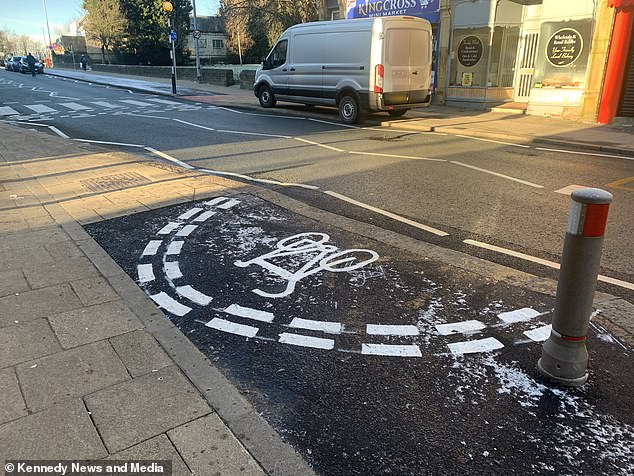 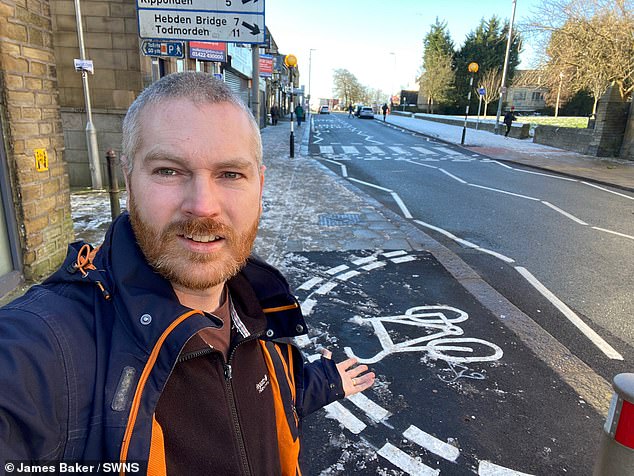 Instead, the retired father-of-three received responses from bewildered residents, who suggested everything from ‘pram parking’ to ‘a semi-circle bike track’.

Meanwhile, others joked that artist Banksy had paid a visit as some kind of prank.

However Calderdale Council defended the tiny markings as a ‘dropped kerb that allows cyclists to safely leave the carriageway’ – but admitted its ‘effectiveness’ would be reviewed in the coming months.

Mr McSharry said: ‘I was walking down King Cross, and I did a double-take. I thought, ‘what was that?’

‘I thought it was graffiti at first. Then I realised that it’s not graffiti; someone has actually done this professionally. ‘I have no idea what it’s supposed to be. Nobody has ever seen these signs before. It looks like the smallest cycle lane ever.’

Ray claims that the tiny semi-circle sits opposite a larger, 200-metre bike lane, that was installed by widening the pavement on an already narrow road.

This has resulted in King Cross becoming increasingly more ‘dangerous’, according to Ray, as there is no separation between cyclists and pedestrians.

The father claims that the cycle fiasco began after King Cross Street was closed for roadworks between July 13 and October 23.

Ray said: ‘Everybody thought that they were widening King Cross [during the roadworks], but instead a cycle path was unveiled. 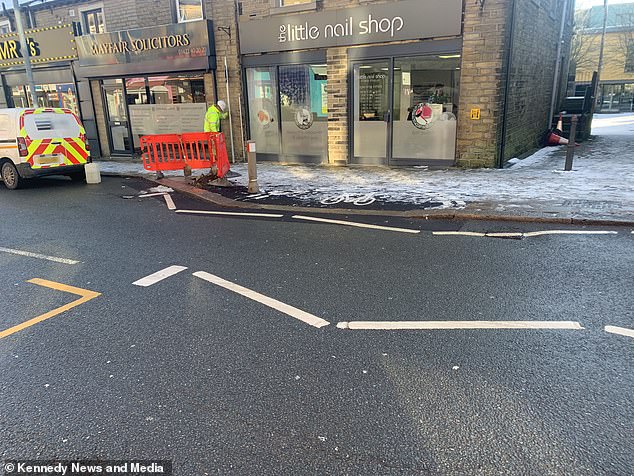 Calderdale Council defended the tiny markings, saying they are a necessary safety feature

‘There’s nothing separating cyclists from pedestrians. It’s an accident waiting to happen.

‘It’s made things more unsafe. Buses won’t drive there anymore because it’s such a dangerous road.

‘I think we all feel like the council could put their money into more valuable things, especially in the cost-of-living crisis.’

Ray’s Facebook post, which shows a painted image of a bicycle inside a semi-circle on a small patch of pavement, racked up almost 400 likes, shares and comments.

Several users tried to take a playful guess at what the bewildering bike symbol was supposed to signify, whilst others poked fun. 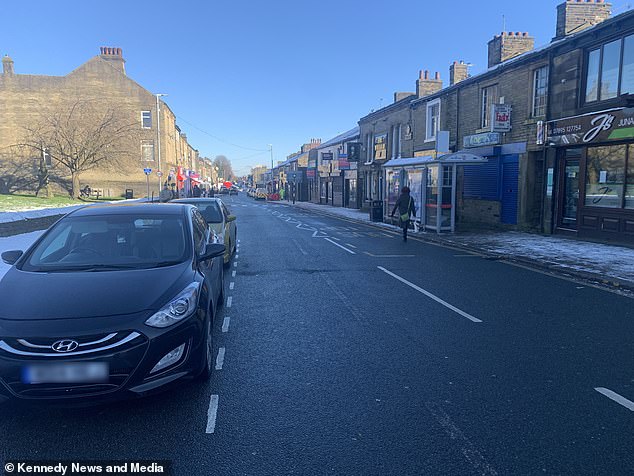 One user said: ‘Has Banksy been to King Cross?’

A second joked: ‘It’s a ‘safe space’ for cyclists to go to get away from those nasty, intimidating cars!’

A third said: ‘[It’s] somewhere to park up your penny farthing.’

Meanwhile, Calderdale Council argue that the cycle lane is designed to make walking and cycling easier for Calderdale residents.

Adrian Gill, Calderdale Council’s Assistant Director for Strategic Infrastructure, said: ‘The new cycleway and footway improvements at King Cross aim to make it easier for people to walk and cycle in this traditionally car dominated area.

‘They form part of the A58 Corridor Improvement Programme, which is funded through the West Yorkshire Combined Authority’s West Yorkshire Plus Transport Fund. One Twitter user joked: ‘Has Banksy been to King Cross,’ because of how laughable the tiny bike lane is

‘As part of the design, there is a dropped kerb that allows cyclists to safely leave the carriageway to access the shared area for pedestrians and cyclists.

‘The design markings on the dropped kerb reflect the requirement for cyclists leaving the carriageway to give way to users of the shared space.

‘It has been designed this way due to the limited space available and its effectiveness will be reviewed in the coming months.

‘It then leads to a newly installed cycle crossing and a further stretch of cycleway at the bottom of Warley Road.

‘The cycle lane provides a segregated link for cyclists from King Cross centre to new crossings across the A646 and A58, allowing cyclists to avoid the busy King Cross junction. The cycleway is bi-directional as marked and is designed to national guidance.’