An Islamist has threatened to kill Asia Bibi, the woman who fled to Canada after being released from death row in Pakistan where she spent years jailed on false blasphemy charges.

In a harrowing video threat posted online, the unnamed man said he had ‘reached’ Canada to give her a ‘terrible death and send her to hell’.

‘I will make sure to bring a terrible end to the blasphemer Asia Bibi,’ he said. 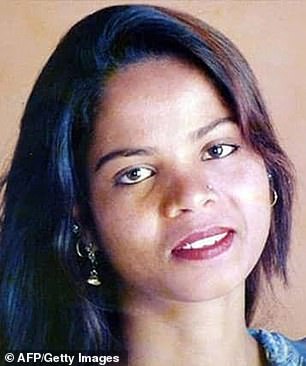 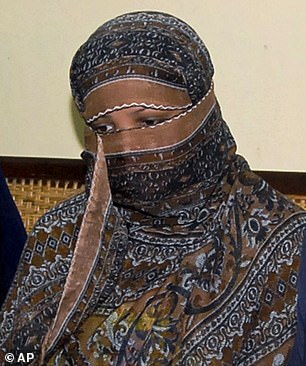 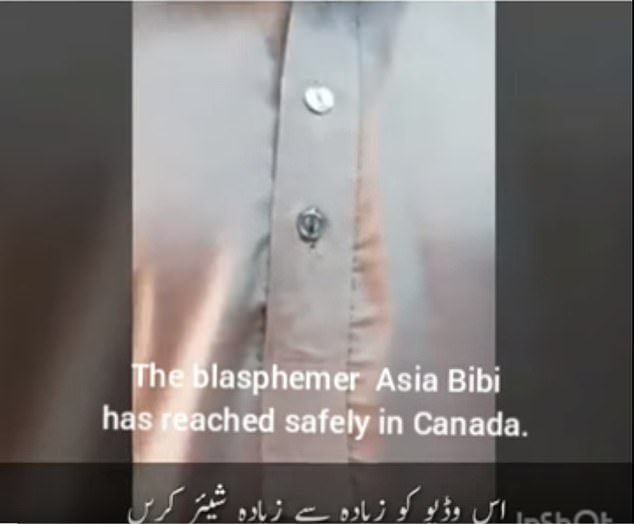 The man did not show his face in the video but filmed his shirt instead.

He said he had gone to Canada to ‘stop’ her from saying ‘blasphemous’ things against Islam again.

Bibi, a devout Christian in her early 50s, was jailed in 2010 after being accused of speaking against the Prophet Muhammad during a heated argument with Muslim women.

She denied the claims, insisting she had not, and her conviction was overturned last year, a decision which prompted protests from Taliban supporters.

She was freed in Pakistan and held in a remote location until being offered refuge by Canada earlier this month.

Authorities in Canada have not yet commented on the validity of the video threat or on her safety.

She is living in an undisclosed location with her daughters who arrived in Canada in December.

Upon her arrival in Canada last month, a source close to Bibi told Daily Mail: ‘This has been an extremely stressful few months. After being released from death row, she thought she was finally free. 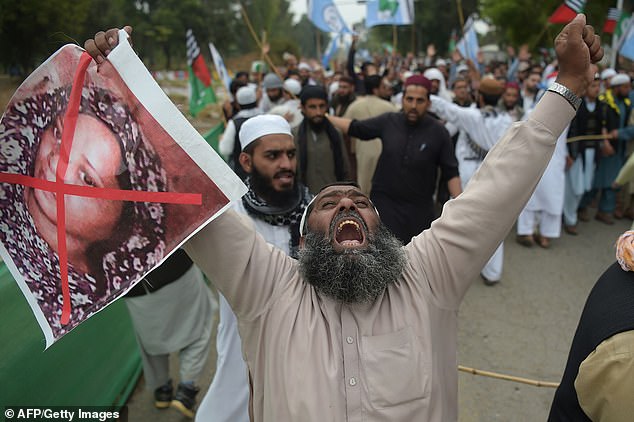 ‘But the row over her release exploded and she found she was literally being hunted by extremists who wanted her dead.

‘So despite being acquitted of blasphemy, for the last few months she has been living in fear for her life.

‘Canada’s Prime Minister has been incredibly helpful. When no other country was coming to her aid, he offered her and her family refuge.’

Bibi’s husband is also believed to be with her in Canada.

The Royal Canadian Mounted Police did not immediately respond to DailyMail.com’s inquiries on Wednesday morning.

Pakistan was accused of not doing enough to protect Bibi after her release as tensions in the country raged.

The government insisted however that it was ‘fully behind’ ensuring her safe departure from the contry.

Why was she jailed for blasphemy?

In June 2009 Christian farmhand Asia Bibi allegedly insulted the name of the prophet Muhammad after having an argument with her co-workers.

She was working as farmhand to support her family.

The family were the only Christians in a tiny village in the Sheikhupura district of Punjab.

While picking berries at work, Mrs Bibi allegedly had a conflict with another member of the village and was then accused of blasphemy.

She was quickly imprisoned under Pakistan’s controversial blasphemy laws and was tried and found guilty – the first woman this century to be found guilty of this crime.

In November 2010 a judge sentenced her to death by hanging – which caused international uproar.

Since then, she has endured eight years on death row and the last four years in solitary confinement in Sheikhupura prison.

She lived in terrible conditions and was denied access to fresh water, light, heat, a toilet, and medical care.

The only two people who tried to help Mrs Bibi through her trial, Shahbaz Bhatti, the Muslim Governor of the Punjab, and Salmaan Taseer, Pakistan’s Christian Minister of Minorities, have both been assassinated.

In October 2018 she was freed on appeal because of insufficient evidence – but since then her life and her family’s lives have been in danger.

After she was released from prison, the Muslim cleric Maulana Yousaf Qureshie announced a bounty of 500,000 Pakistani rupees to anyone who would kill her.

Her husband, a bricklayer, had three children from a previous marriage and Mrs Bibi had two of her own children with him.