Australians’ overseas travel plans are being put in jeopardy by delays in issuing new passports amid a massive backlog caused by a rush of applications after two years of border closures.

The Department of Foreign Affairs and Trade says processing times have doubled since October and now advises applicants to allow at least six weeks to get their passport. But some hopeful travellers say they have waited eight weeks or more and still have no idea when their documents will arrive. 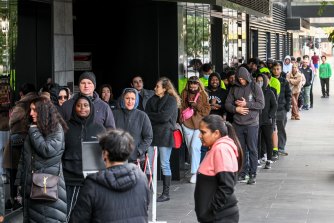 Applicants queued up for at least three hours in Melbourne to check on the status of their passports.Credit:Eddie Jim

Hundreds of applicants desperate for any news faced a wait of at least three hours in Melbourne and up to six hours in Sydney on Monday in queues that snaked around the block at the two passport offices.

Amanda Handley said she was concerned about her family’s trip to Denmark to visit her partner’s parents after waiting eight weeks for her son’s passport to arrive. Like many, her phone calls went unanswered.

“I’ve had no communication and I’ve been ringing for two weeks, so eight weeks in I just want to see what they say,” Handley said while waiting in the blistering cold outside the Melbourne passport office.

“They’ll either say you’re not going to go overseas in two weeks, or it will be ready.” 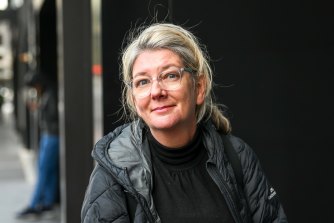 Amanda Handley said she was worried whether her son’s passport would arrive before her family’s trip to Denmark in two weeks. Credit:Eddie Jim

Kathy Teagno turned up out of desperation after a nine-week wait for her daughter’s passport which had thrown an upcoming visit to the US for her mother’s memorial service into doubt.

“Didn’t they see it coming? I don’t understand how they couldn’t be prepared for it. I think it’s pretty unacceptable,” she said.

DFAT’s website says applicants can get their passports within two business days if they pay $225 on top of their $308 application fee for “priority processing”.

A DFAT spokeswoman said the office was receiving about 10,000 to 12,000 applications every day, which was 3000 more than usual, and currently had a four-week backlog to process.

Most applicants received their passports within six weeks but some would take longer, she said, particularly first-time applications for which each document needed to be verified.

“We continue to onboard and train additional passport processing and call centre staff to meet the increased demand,” she said.

“Customers will soon start to see a reduction in the current delays over the coming weeks. We thank people for their patience.”

Travel agent Peter Alysandratos said there had been some close calls among his clients at Prahran Travel, which was “crazy busy” as many Australians prepared for their first overseas holidays since the start of the pandemic.

Long queues starting in the Australian Passport Office at Collins Square, Docklands snake outside onto the footpath and around the block. Credit:Eddie Jim

One family received their passports on the day of their flight out, he said, and another still had not received their son’s passport after applying three months ago.

“We’re telling all our clients at the moment that have not received their passports not to make a reservation,” Alysandratos said.

Jovan Tomic, who’s booked to fly to Serbia on Sunday, was one of many travellers who knew their passport was ready but faced an ordeal collecting it. 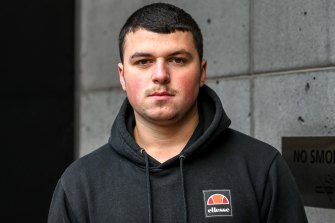 Jovan Tomic is hoping to head to Europe at the weekend.Credit:Eddie Jim

The Melbourne passport office turned him away on Friday because the collection line was too long, so he skipped university on Monday morning to join the queue.

Provisional data from the Australian Bureau of Statistics shows there were 611,000 departures from Australia in April.

That was almost double the number of departures in March, but only one-third of the number in April 2019.

Airlines are ramping up capacity over the coming months, with Qantas saying its international capacity was set to hit 50 per cent of pre-COVID levels by the end of June before rising to 70 per cent by September.