Melbourne’s gruelling 15 weeks of lockdown is ending with the city’s shops, cafes, restaurants and pubs allowed to re-open their doors from 11.59pm Tuesday and 5.5 million residents free again to leave their homes whenever they please.

Monday's announcement is intended to mark an end to the city's five month-battle with Australia's second wave of coronavirus infections which has cost nearly 800 lives, hundreds of thousands of jobs and tens of billions of dollars to the state's economy, with a long and uncertain recovery expected. 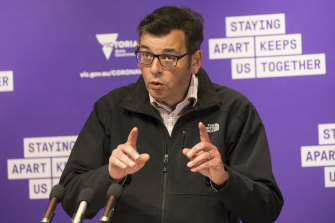 Premier Daniel Andrews said on Monday that health authorities were confident the recent outbreak in Melbourne’s northern suburbs that threatened to derail the opening-up process was contained after more than 14,000 tests for the deadly virus returned no positive results.

An emotional Mr Andrews paid tribute to the "kindness and commitment and courage" shown by millions of Melburnians over the difficult recent months.

"We haven't had a zero case day for a long time, which is why it is emotional, because people have been through a lot," Mr Andrews said.

"None of this has been easy but Victorians have shown what they are made of, looking out for each other, protecting and caring for each other but also knowing that this virus does not discriminate."

The state recorded no cases of the virus on Monday, for the first time since June, and another 1100 tests from the suburbs affected by the northern cluster all came back negative on Monday afternoon.

But Mr Andrews warned that some restrictions, especially on in-home gatherings, would remain in place for the foreseeable future, face masks in public will remain mandatory and Melbourne would not be able to fully return to normal until a vaccine is available.

New rules on home visits, now considered the most risky environment for transmission of the virus, will be announced on Tuesday and workers who can do their jobs from home are to continue working remotely until further notice, the Premier said.

But outdoor religious gatherings and exercise classes will be allowed again from Tuesday night with limited numbers while some restrictions on outdoor social gatherings will be relaxed and beauty, personal services and tattooists can re-open with customers and staff wearing masks.

The 25-kilometre travel limit and the metro-regional ‘ring of steel’ will be enforced until November 8 with gyms and other indoor fitness facilities also due to open that day if case numbers remain low.

Mr Andrews said he was optimistic that the systems now in place would help the Victorian community avoid another wave of COVID-19 infections.

“If we all play a part, I'm confident we can keep this at bay,” he said.

Prime Minister Scott Morrison congratulated Melburnians on their achievement in bring the virus under control and said that Monday’s announcement was an important step toward opening up freedom of movement around the nation.

"Of course, there is a lot further to go and a lot more decisions," Mr Morrison said. "This is basically the first step on that three-step plan to reopen Australia by Christmas."

"For now, I want to say thank you and congratulations, you have done it really tough in Melbourne and across Victoria over recent months," he said.

After months of serious tension between the state and federal governments, the Prime Minister struck a conciliatory tone, thanking Mr Andrews for making the call to ease restrictions with Mr Morrison saying was was looking forward to working with the Premier on the additional steps to reopen over the coming months.

Monday's announcement headed off a planned rebellion by more than 30 of Melbourne's most prominent restaurants and fine dining institutions, including Florentino, Flower Drum, Chin Chin and Citta who had had planned to defy the restrictions and throw open their doors on Wednesday if the Andrews government failed to act.

The Age spoke to several prominent restaurateurs and chefs involved in the secret plan who say they were willing to risk hefty fines and possible arrests to save their embattled businesses, if restrictions were not eased.

Prominent epidemiologists told The Age that the time was right to re-open the city, with the success in containing the northern suburbs outbreak justifying a high degree of confidence in the contact tracing system.

While there was some surprise among the experts at the success of health authorities in driving down case numbers to zero, there were warnings that while the virus continues to circulate in Melbourne, the risk of a resurgence remained real.

“I’m pleasantly surprised we got down here," Professor Blakely said.

"I thought it was a big ask to get to them by now. It’s gone extremely well."

As the state prepared on Monday afternoon for Mr Andrews' announcement there was a sharp reminder from Canberra of the toll the long lockdowns have taken with the federal Health Department telling Senate Estimates that demand for mental health services in the state had soared in recent months.

Demand for Kids Helpline services rose by 61 per cent, Beyond Blue help went up by 67 per cent and Lifeline calls rose by 40 per cent, the department's first assistant secretary Mark Roddam told the committee .

Opposition Leader Michael O’Brien said the Premier was self-congratulatory as he announced restrictions would be lifted.

The Liberal leader said Mr Andrews was seeking 'a pat on the back" and his focus should turn to rejuvenating the crippled economy.

“It’s been a terrible price to pay for a problem that should never have occurred …There will be scars on the psyche of this state that will not heal,” Mr O'Brien said.

“Hotel quarantine gave us the second wave and bungled contact tracing has kept us in it for far too long.

“This is an achievement for Victorians, not for the politicians whose mistakes led us here in the first place.”

Paul Guerra, the chief executive officer of the Victorian Chamber of Commerce and Industry said Monday’s state government announcement of impending eased restrictions was "fantastic" and urged Melburnians to "get out and enjoy this state".

Tim Piper, the Victorian head of the Australian Industry Group which represents businesses in manufacturing, engineering, construction and other sectors, said Monday was "an absolutely vital day for the Victorian economy and a historic day for Victoria because it affects so many people".

"Everybody wants to spend money right now," he said. "Our concern is what will happen when that bounce slows down, and when JobKeeper ends in March."

Mr Piper said it was crucial the Victorian budget, due in early November, was "different to normal state budgets".

"We need a different type of spending coming; it can’t just be infrastructure."

But the pubs lobby, the Australian Hotels Association, said many venues were saddled with big debts from their months of closure and would continue to struggle for viability with reduced patron numbers.

“The plans announced today are a step in the right direction, but they still do not meet the
viability test to save our Pubs from the debts they are facing,” the association's president David Canny said.

Tom Gunn, General Manager of Proud Mary Café in Collingwood, struck an optimistic note at being able to welcome diners back into the business, with plans to to hire up to nine new staff members to cope with the expected demand of locals kept away from their neighbourhood eateries for months.

'I think Melburnians have been starved of the one thing they obsess over, and that’s the café life.

"I would be surprised if it’s not one of the busiest summer’s we’ve had."

With Liam Mannix and Bianca Hall

'I've nicked a little bit from everyone and sprinkled it all over me,' says Yungblud
Lifestyle