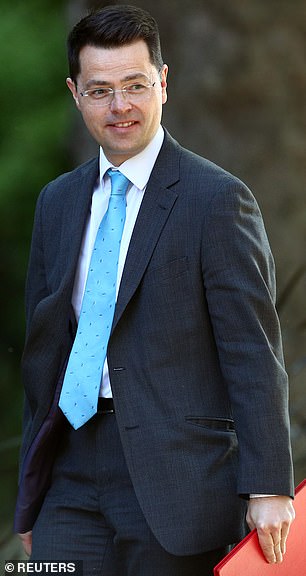 The Tories accused Labour of plotting a tax raid on Middle England which could increase the average family’s council tax bill by hundreds of pounds a year.

He pointed to a Labour-backed report, published on Monday, which proposed scrapping council tax and replacing it with a ‘progressive property tax’.

The report cited another study which called for the new levy to be set at 0.7 per cent of the value of a home – equating to an extra £374 a year on top of what the typical household pays in council tax.

The report also called on Labour to crack down on the owners of second homes by levying a significantly higher rate of tax.

Last night Labour said it would be consulting with members about the property tax idea, adding that it was not considering setting the rate at 0.7 per cent.

The progressive property tax would also be a tax on home improvement, because rates would be reassessed annually – unlike council tax – so those who build extensions would face larger bills.

Last year Labour housing spokesman Andrew Gwynne pledged a ‘radical’ new system for funding local government, saying: ‘Council tax is broken. It is not fit for purpose.’ And earlier this week the party’s Cabinet Office spokesman Jon Trickett said: ‘Labour is committed to delivering a fundamental shift in wealth and power from the few to the many.’

Last night Mr Brokenshire said: ‘This Labour-backed proposal would clobber local residents up and down the country with tax hikes.

‘Time and again, Corbyn’s Labour prove they are the enemies of aspiration, and it’s those who work hard for themselves and their families who pay the price.’ When Labour was last in power, council tax doubled in England, adding an extra £751 a year on a Band D home between 1997 and 2010.

Yesterday, the party said it would consider the findings of a report it commissioned, called Land For The Many, which made the call for a progressive property tax. The report cites a study by the Resolution Foundation which called for council tax to be replaced by a ‘proportional tax of 0.7 per cent, boosting revenues by £12.7 billion’. The average property price in England is £243,128, meaning that under this plan the annual homes tax bill would thus be £1,701 a year.

John O’Connell, of the TaxPayers’ Alliance, said: ‘The current council tax system certainly is outdated, but these proposals are punitive and wrong-headed.

‘A higher rate of stamp duty is already levied on the purchase of a second home, and the proposed offshore company property tax is also alarming. If these ideas become policy, they will hurt foreign investment and punish current and future UK homeowners.’

‘A Corbyn government will drive away business and enterprise, take away our national pride, shred our defences and bankrupt the country. Corbyn and his team are the biggest threat to our economic and political freedoms.’

The Land For The Many report also called for new powers to force landowners to sell vacant plots on the cheap, taxes on land owned by foreign companies and the building of thousands of council houses on public land.