Japan’s failure to recognise same-sex marriage is unconstitutional, a court ruled today in a landmark first verdict on the issue that was welcomed by campaigners.

More than a dozen same-sex couples filed lawsuits in district courts across Japan in 2019, accusing the government of discrimination as the only G7 nation that still does not recognise gay unions.

The first of the cases to reach a verdict, in the northern city of Sapporo, sets the stage for more pressure on lawmakers and represents a significant win for equality activists.

The Sapporo District Court said sexuality, like race and gender, is not a matter of individual preference, therefore prohibiting same-sex couples from receiving benefits given to heterosexual couples cannot be justified. Japan’s failure to recognise same-sex marriage is unconstitutional, a court ruled today in a landmark first verdict on the issue that was welcomed by campaigners. Pictured: Supporters  stand in front of the Sapporo District Court today to celebrate the ruling

‘Legal benefits stemming from marriages should equally benefit both homosexuals and heterosexuals,’ the court said, according to a copy of the summary of the ruling.

Judge Tomoko Takebe said in the ruling that not allowing same-sex marriages violates Article 14 of the Japanese Constitution prohibiting discrimination ‘because of race, creed, sex, social status or family origin.’

Opposition lawmaker Kanako Otsuji, one of the few openly gay Japanese politicians, said in a tweet she was ‘truly, truly happy’ about the verdict.

‘With this ruling, I urge the Diet, as the legislative branch of the government, to deliberate a proposed amendment to the civil code to make same-sex marriage possible,’ she wrote.

The plaintiffs had requested damages of one million yen (£6,585) per person, arguing they were being denied the same legal rights as heterosexual couples. Lawyers for the plaintiffs, surrounded by rainbow flags, held up a sign declaring the ruling ‘a huge step towards equality in marriage’

Their request for compensation was turned down by the court, which said lawmakers may have struggled to legislate on the issue as the matter has only become a topic of parliamentary debate in recent years.

But the wording of the verdict – which ruled that sexual orientation is like gender or race in that it is not chosen at will – sparked celebrations outside the courthouse.

Lawyers for the plaintiffs, surrounded by rainbow flags, held up a sign declaring the ruling ‘a huge step towards equality in marriage’.

‘I was a bit disappointed when I heard the phrase ‘turn down’ in verdict, but later I couldn’t stop my tears when the presiding judge said it lacks reasonable foundation and is discriminatory,’ said Ryosuke Kunimi, one of the plaintiffs.

While Japan has some protections for sexual minorities, many same-sex couples struggle to rent apartments together and are even banned from hospital visits.

A November poll by the Yomiuri newspaper found 61 percent of people in Japan are broadly in favour of same-sex marriage, with 37 percent against. Judge Tomoko Takebe said in the ruling that not allowing same-sex marriages violates Article 14 of the Japanese Constitution prohibiting discrimination ‘because of race, creed, sex, social status or family origin’

The country’s 1947 post-war constitution says that ‘marriage shall be only with the mutual consent of both sexes’.

The government says this means same-sex marriage is ‘not foreseen’ in the constitution or civil law.

But lawyers for the plaintiffs and other legal experts argue the language of the constitution is only meant to ensure equality between prospective spouses and prevent forced marriages.

There are currently 14 couples, including the three whose case was before the Sapporo court, who have filed suits over the issue, according to the Mainichi Shimbun newspaper.

Historically, Japan was broadly tolerant of homosexuality, with documented cases of samurai warriors during feudal times having male lovers.

But as the country industrialised and modernised from the late 19th century, Western prejudices were increasingly adopted.

In a society where pressure for conformity is strong, many gay people hide their sexuality, fearing prejudice at home, school or work. Transgender people also have difficulty in a society where gender identity is highly specific. 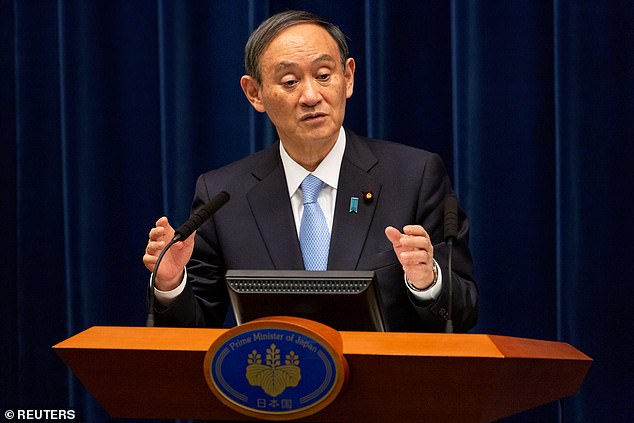 The movement for LGBTQ equal rights has lagged because people who don’t conform have been largely marginalized.

Some other local governments have followed suit, and corporate Japan is also showing signs of moving toward recognition.

But not all LGBT couples in Japan live in areas with such certificates – and even those who have them find they are sometimes not recognised.

One of the plaintiffs in the same-sex marriage lawsuits died in January of a suspected brain haemorrhage, and reports said the doctor would not tell his partner what was wrong as he was not a legal family member.

Ruling lawmakers have repeatedly been criticized for making discriminatory remarks against sexual minorities for ‘lacking productivity.’

But the Sapporo court’s ruling that the government’s ban was unconstitutional is seen as a major step forward for the plaintiffs and their supporters, setting a precedent for similar court cases and raising their hope for a legal change.

‘I hope this ruling serves as a first step for Japan to change,’ said one of the women, who only identified herself as ‘Plaintiff No. 5.’

Four other lawsuits are pending in Tokyo, Osaka, Nagoya and Fukuoka.

Japan’s refusal to issue spouse visas to partners of same-sex couples legally married overseas has been a growing problem, forcing them to temporarily live separately.