Rishi Sunak mingled in a terrace bar, as out of place as a fancy bird fluttering over streets of Birmingham: JASON GROVES analyses a day of drama as Tory MPs choose their ‘final two’ for leadership fight

‘No one knows anything!’ said one exasperated campaign source.

The time was 2pm, the Conservative Party’s 357 MPs were halfway through the final leadership ballot and everyone was running on adrenaline.

All three remaining camps were telling journalists they were confident that their candidate would get through. They couldn’t all be right. But the level of rumour, misinformation and downright lying among Tory MPs was such that no one could be absolutely sure what the reality was.

The three surviving campaigns were pulling out all the stops to lobby the last few floating MPs to their cause – and to try and peel off supporters of the rival camps.

On Tuesday evening, Mr Sunak was even spotted on the Commons terrace – a boozy venue on the banks of the Thames where MPs go to gossip and let off steam – and which the teetotal former chancellor has studiously avoided during his seven years in Parliament.

It was, said one observer, like ‘spotting an exotic bird fluttering through the streets of Birmingham – he was so far out of his natural habitat that you had to pinch yourself to be sure it was real’. 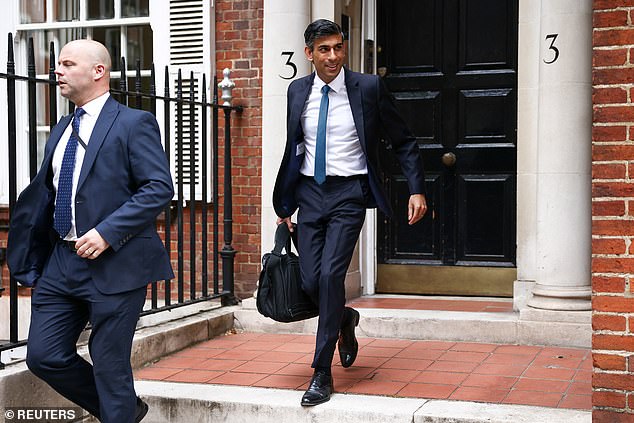 On Tuesday evening, Mr Sunak was even spotted on the Commons terrace – a boozy venue on the banks of the Thames where MPs go to gossip and let off steam – and which the teetotal former chancellor has studiously avoided during his seven years in Parliament 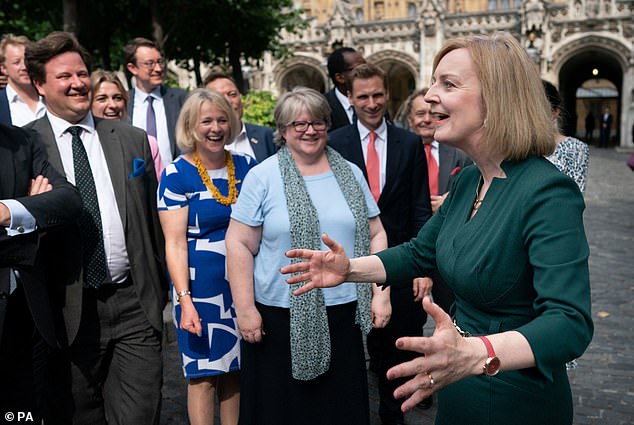 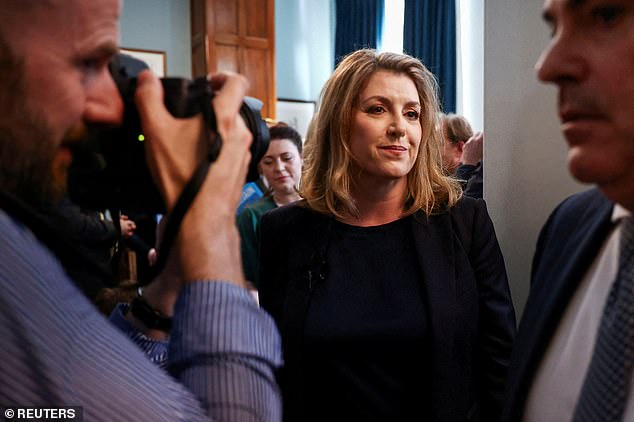 Penny Mordaunt scored the first success of the day when Theresa May’s former deputy Damian Green publicly backed her, but behind the scenes her campaign team were starting to get a sinking feeling

The gambit did not appear to have much impact. After half an hour on the sweltering terrace, he had managed to speak only to a couple of new MPs before departing in his black campaign Land Rover – a lookalike of the ministerial car he enjoyed until quitting the Cabinet this month.

Allies of Liz Truss were disappointed but not surprised, saying Mr Green had never forgiven her for failing to back him when he faced dismissal over allegations that pornography was found on his computer. And despite the early success, behind the scenes Miss Mordaunt’s campaign team were starting to get a sinking feeling.

The first sign of panic came shortly after 9.30am when the trade minister posted an extraordinary message to Tory MPs on Twitter.

The backlash at Westminster, which has been reeling from the murders of two MPs in recent years, was immediate.

Tory MP Richard Holden said the message showed ‘a complete lack of judgment’, adding: ‘Let’s leave the hateful nonsense to the Lefties please.’ Minutes later, Miss Mordaunt deleted the tweet. But the damage had been done. 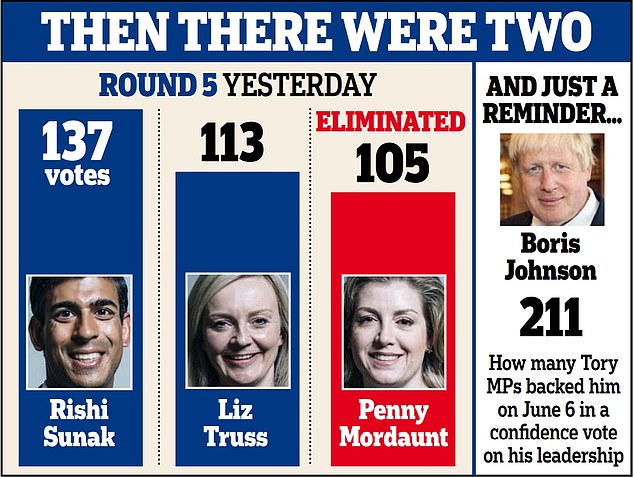 Penny Mordaunt was eliminated yesterday in the fifth round of voting for leadership of the Tory party, leaving Rishi Sunak and Liz Truss to duke it out over who will become Boris Johnson’s replacement as Prime Minister

Miss Mordaunt had boasted of running a ‘clean’ campaign. A crude, two-footed challenge on her opponents was always likely to be a turn-off for wavering MPs. Meanwhile, MPs circulating in the glass-domed Portcullis House were swapping rumours about dirty tricks and vote fixing. At one point, some Truss supporters were convinced that Sir Gavin Williamson, the Machiavellian former chief whip working on Mr Sunak’s campaign, had lent votes to the Foreign Secretary the previous evening to ensure rising star Kemi Badenoch was forced out.

Now, they feared, he could withdraw that support and help put Miss Mordaunt into the final two.

‘It’s obvious that Penny is going to blow up at some point,’ one said. ‘Why wouldn’t he want to help her?’ Moments later, a well-placed Tory said some Sunak-backing MPs had staged a revolt after being asked to vote for Miss Mordaunt.

‘A lot of them could live with Liz but are terrified Penny would be a disaster,’ the source said. ‘Gavin may want to fix the contest but they’re not going along with it – it’s too big a risk.’

Michael Gove was also the subject of fevered speculation. He was spotted having lunch with his protegee Miss Badenoch, sparking rumours that the pair were about to throw in their lot with Mr Sunak in return for the promise of plum jobs. Meanwhile, Mr Johnson was preparing for his swansong in the Commons. Miss Truss and a somewhat rueful looking Miss Mordaunt both broke off their campaigns to attend the Chamber and cheer on the final bravura performance. 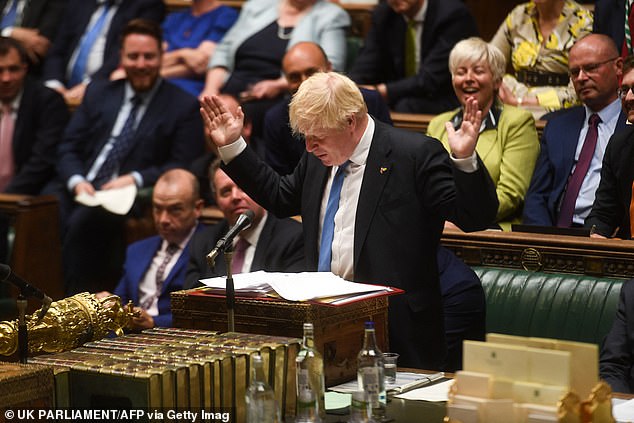 While all the leadership jockeying was going on, Boris Johnson was preparing for his swansong in the Commons during his final session of PMQs

Mr Sunak, whose resignation a fortnight earlier led to the PM’s downfall, remained hunkered down in his campaign bunker.

It was perhaps just as well, with the PM using the opportunity to take a swipe at his former chancellor as he offered ‘advice’ to his successor. In a pointed jibe at the Treasury’s sometimes myopic approach, he said: ‘Remember that if we had always listened to the Treasury, we would not have built the M25 or the Channel tunnel.’

And, in what was close to an endorsement of Miss Truss’s agenda, he added: ‘Cut taxes and deregulate wherever you can to make this the greatest place to live and invest, which it is.’

By convention, prime ministerial farewells are convivial affairs, with opposition MPs taking a day off from their usual partisan jibes. Not this time. Opposition MPs lined up to have one last kick at the departing PM. Some diehard Boris supporters, such as Andrea Jenkyns, were in tears at his departure. But not Theresa May, who added a sour note by refusing to join the Tory applause for the PM. Down the corridor, voting was about to get under way. Mr Sunak was first to arrive to vote, perhaps trying to underline his status as frontrunner.

Miss Mordaunt, accompanied by her campaign chief Andrea Leadsom, and Miss Truss arrived shortly afterwards. In the gloomy committee corridor where Tory leadership contests have been fought for years, rumours continued to swirl.

Allies of Mr Sunak claimed the contest was ‘too tight’ to engage in vote-fixing. At 4pm, 1922 Committee chairman Sir Graham Brady told the waiting room of MPs and journalists that Miss Truss had seen off Miss Mordaunt by just eight votes to reach the final two.

Miss Mordaunt’s backers launched a bitter attack on the media for highlighting her changing views on issues such as trans rights, and claims that she failed to pull her weight as a minister. In truth, her lack of top-level experience alarmed many senior Tories.

After 11 candidates and five votes, the first stage of the Tory leadership battle has ended up with the contest first foreseen by Mr Johnson last September when he appointed Miss Truss as foreign secretary as a counterbalance to his troublesome chancellor.

Now we will discover who was destined to come out on top.