New Chancellor Jeremy Hunt has trashed Kwasi Kwarteng’s record in his first day in the job, admitting the government ‘made mistakes’ and was ‘flying blind’ with its economic plan.

Mr Hunt was appointed by Liz Truss yesterday afternoon after she sacked Kwasi Kwarteng as Chancellor following weeks of economic turmoil after he unveiled his mini-budget in September.

In a bitter parting shot to the Prime Minister, Mr Kwarteng told close allies he believes she has only bought herself ‘a few weeks’ and that mutinous Tory MPs’ ‘wagons are circling’.

In his first interview as Chancellor this morning, Mr Hunt told Sky News: ‘I want to do the right thing for the British people. It’s a big honour to do the job that I’ve ben asked to do by the PM. But I want to be honest with people – we have some very difficult decisions ahead.

‘The last few weeks have been very tough, but the context of course is coming out of a pandemic and a cost of living crisis, and the thing that people want, markets want, the country needs now is stability.

‘No Chancellor can control the markets, but what I can do is show that we can control our tax and spending plans and that is going to need some very difficult decisions, both spending and tax.

‘There were mistakes. It was a mistake when we’re going to be asking for difficult decisions across the board in tax and spending to cut the rate of tax paid by the very wealthiest. 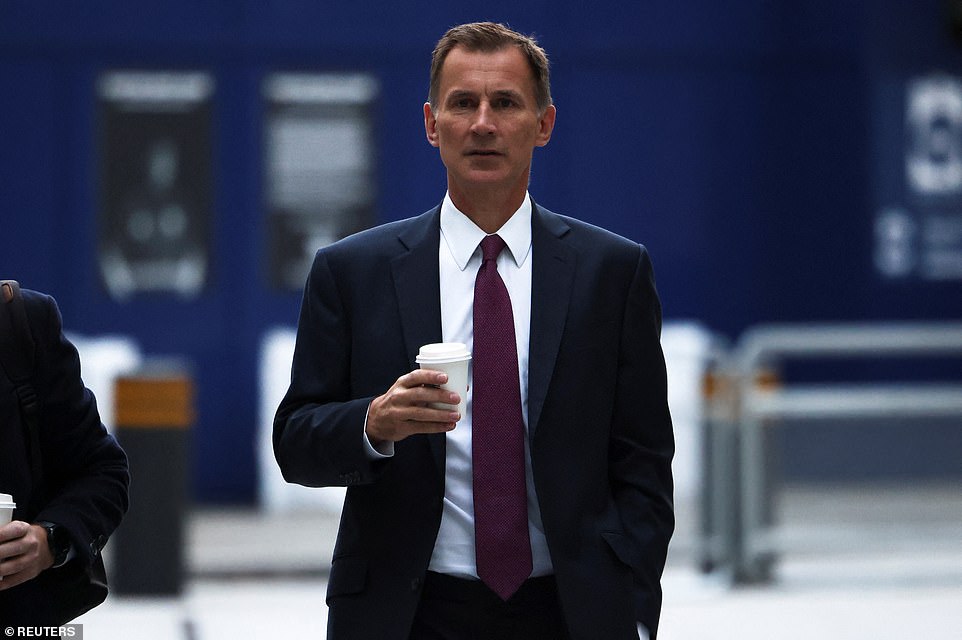 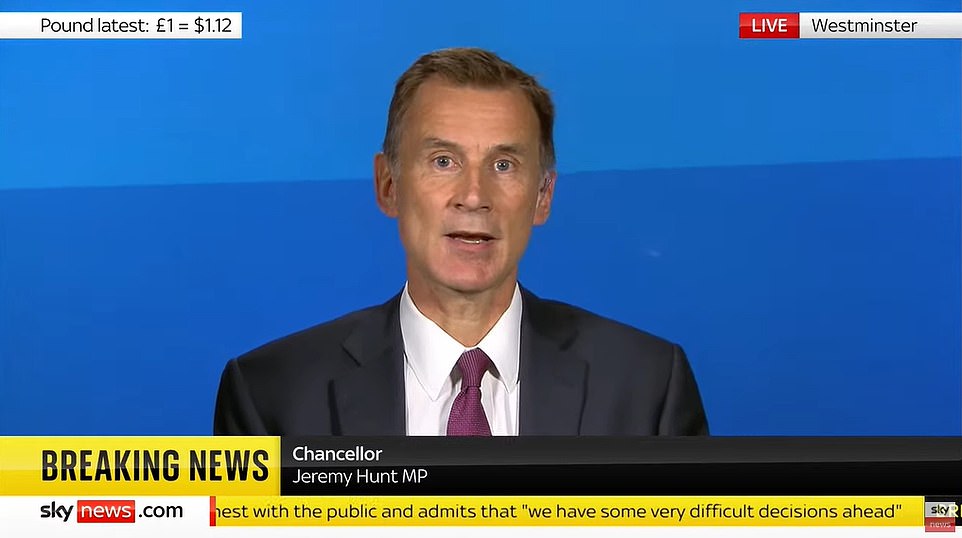 Mr Hunt said: ‘No Chancellor can control the markets, but what I can do is show that we can control our tax and spending plans’ 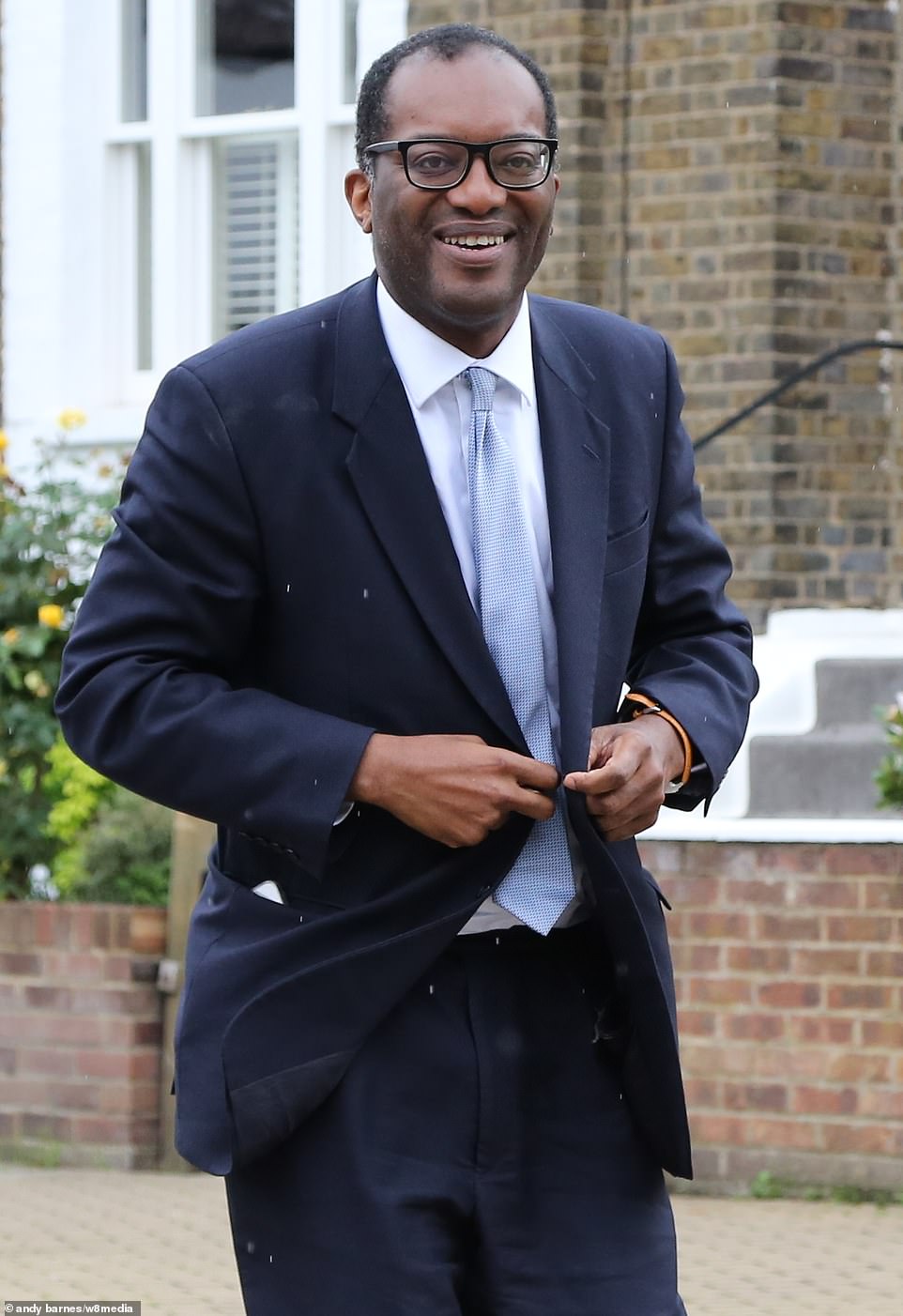 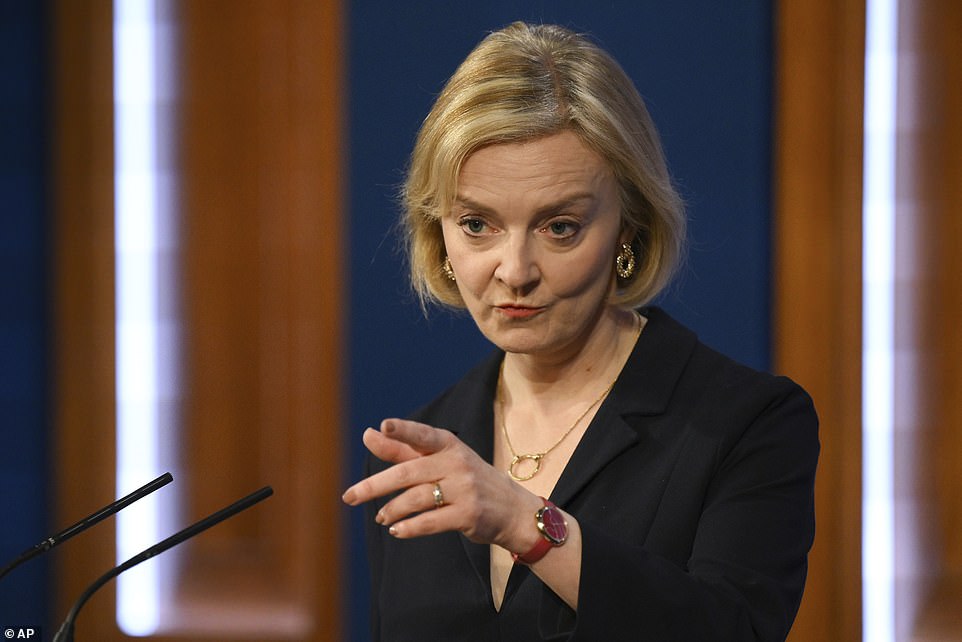 Liz Truss held a press conference in Downing Street on Friday in which she announced a second major U-turn on the mini-budget: this time on corporation tax

‘It was a mistake to fly blind and to do these forecasts without giving people the confidence of the Office For Budget Responsibility saying that the sums add up.’

Mr Hunt signalled a clear change of direction from Ms Truss and Mr Kwarteng’s radical tax-cutting mini-budget which sparked chaos in the markets.

He told Radio 4: ‘The way we went about it clearly wasn’t right.

‘We’re also going to have pressure on the tax side – taxes are not going to come down as much as people hoped, and some taxes will have to go up.

‘This is not an easy time, and we’re not going to be able to do everything that we would want to do but we will be thinking about some of the poorest people in society when we take these decisions.’

Liz Truss launched a desperate effort to save herself yesterday as she sacked Mr Kwarteng and made another major U-turn on her fiscal policy, before conducting a press conference where she presented herself to the media for just eight minutes.

She reportedly told the Chancellor he had to go to avoid further market turmoil – but he only discovered he was about to be sacked after it was reported in the media on the way to see the PM.

A source close to the former Chancellor told The Times last night: ‘Kwasi thinks it only buys her a few more weeks.

‘His view is that the wagons are still going to circle.’

It follows the press conference on Friday at which Liz Truss refused to apologise for the impacts of the mini-budget or take media questions – answering just four in an almost identical fashion before abruptly leaving the room.

Dozens of Tory MPs are said to be openly discussing ways to get rid of the new PM.

Mr Kwarteng’s swipe at Ms Truss comes after she thanked him for his ‘decision’ to leave the Cabinet – but he was quick to publicly confirm he had, in fact, been fired.

It appears to many as a desperate sign that Ms Truss knows her premiership is in peril after a shambolic first 39 days in power.

And it has now been revealed that a group of around 20 MPs met on Monday over curry to plot a possible removal.

Despite media briefings as early as 8am on Friday that the Chancellor had the PM’s full support, Mr Kwarteng cut his trip to the US a day short to fly back to the UK, and was sacked by Ms Truss almost as soon as he arrived back in London yesterday.

Pressure had been mounting for days for Liz Truss to take action after the markets went into turmoil over the Chancellor’s unfunded mini-budget announcement.

Runners and riders: Who could replace Liz Truss as PM?

Rishi Sunak is the clear favourite to take over as PM if Liz Truss is forced out by MPs. He came second in the Conservative leadership contest and led from the start in the number of MPs who supported him.

She may have lost out in the final round of MPs’ votes, but Penny Mordaunt was hugely popular during early stages of the leadership race, with more supporters than Truss until the final round.

She has since had a prominent role as Leader of the House.

Another defeated contender in the recent leadership election, Kemi Badenoch proved hugely popular among the party membership – but has little experience in major Cabinet roles.

He may have only been welcomed back into the fold yesterady, but as a two-time contender in previous leadership elections Mr Hunt’s name is being thrown into the ring.

The current Defence Secretary did not stand in this year’s election contest despite expectations he would. In part due to this, he is now a possible unity figurehead.

Many critics of Boris Johnson were calling for him to go for months before he was finally forced out earlier this year. But even some of those who supported his leaving are now wondering if Liz Truss is even worse, and a return to Johnson might be a smart move.

As a former PM, Theresa May is extremely unlikely to lead the country again. But some Conservatives think she could make a good caretaker PM as someone who has prior experience of the job.

Critics have said she has scapegoated Mr Kwarteng for policies which she based her campaign to become the next PM on.

The government was already forced to make one highly damaging climb down after it announced it would abolish the 45p income tax rate for those earning more than £150,000.

Many MPs, even Conservatives, said this was a poor choice given the cost of living crisis rocking the country.

In a press conference on Friday, she told the nation that she was scrapping her plan to freeze corporation tax – and that it will rise from 19 percent to 25 percent as previously planned.

The measure will give the government an extra £18 billion per year – but is not an end to the problem, as OBR forecasts delivered to No.10 today show an imminent £60 billion black whole in the UK’s finances, according to reports.

It was unclear late on Friday whether such drastic actions could be enough to keep her in Downing Street, with the markets remaining jittery and reports of Tory MPs plotting intensely to replace her.

After three weeks of turmoil on the financial markets in the wake of Kwasi Kwarteng’s £43 billion mini-budget tax giveaway, Ms Truss ended days of frenzied speculation by forcing her friend out of office and U-turning on her commitment to drop the planned rise in corporation, a central plank of her leadership campaign.

The U-turn will particularly hurt Ms Truss as it means Rishi Sunak’s, her leadership rival, plan will go ahead.

At the brief news conference in Downing Street on Friday, she had dismissed calls for her resignation, saying she is ‘absolutely determined to see through what I have promised’.

It came as she also signalled a new squeeze on public spending which would ‘grow less rapidly than previously planned’, ahead of the medium-term fiscal plan on October 31 – when Mr Hunt will now set out how he intends to get the public finances back on track.

‘It is clear that parts of our mini-budget went further and faster than markets were expecting, so the way we are delivering our mission right now has to change,’ she said.

‘We will do whatever is necessary to ensure debt is falling as a share of the economy in the medium term.’

Mr Kwarteng released a letter to Liz Truss to the public after being forced out, saying he had been ‘asked to resign.’

The letter pointed out that he has always supported ‘your vision’ for the UK, a thinly-veiled jab at the decision to replace him for policies he made directly with the PM.

Former Foreign Secretary Jeremy Hunt now steps into the role, which some Tory MPs say is a ‘safe’ choice, but the public remain unconvinced.

In a snap poll on Friday evening, YouGov found that two in five Britons believe Mr Hunt will do a bad job, with just 14 percent expecting him to do a good one.

Britons won’t have long to wait to judge, as the new Chancellor is expected to give a round of interviews on Saturday to set out the government’s new plans.

Some MPs, including Cabinet Ministers, are already holding informal talks about the possibility of installing a new leader by ‘consensus’.

One said: ‘If this is going to work we need to make it less about the leader – whether it is Rishi [Sunak] or Penny [Mordaunt] or whoever – and more about the team.

‘We have to try to present a united front and put together a team of all the talents. And we have to avoid a contest.’

Miss Truss’s actions yesterday, coupled with her awkward manner at a perfunctory press conference, appeared to harden opposition. A former Cabinet minister told the Daily Mail: ‘You can’t sack your Chancellor for implementing your own policies and then try to pretend the mess you’ve made has got nothing to do with you.’

Loyal MPs on Friday night were urging party colleagues to think again about any bid to oust Ms Truss, who is theoretically safe from a leadership vote for another year under the rules of the backbench 1922 Committee.

But there is speculation that plotters could promote a unity candidate and avoid a contest or even persuade the head of the 1922 Committee Sir Graham Brady to tell Ms Truss it is time for her to go.

But even the staunchly loyal MP Sir Christopher Chope had some harsh words for his party leader, after defending her on Thursday and ruling out any reversal. “I feel let down, very badly let down.

And I expressed disbelief at what I heard today because it’s totally inconsistent with everything that the Prime Minister stood for when she was elected,” he told BBC Newsnight.