JOE Biden has been accused of racism for referring to "some black woman stacking grocery shelves" during a Covid chat.

The presidential candidate, 77, made the comments during a roundtable meeting with military veterans in Tampa, Florida on September 15.

⚠️ Read our US election live blog for the latest news & updates 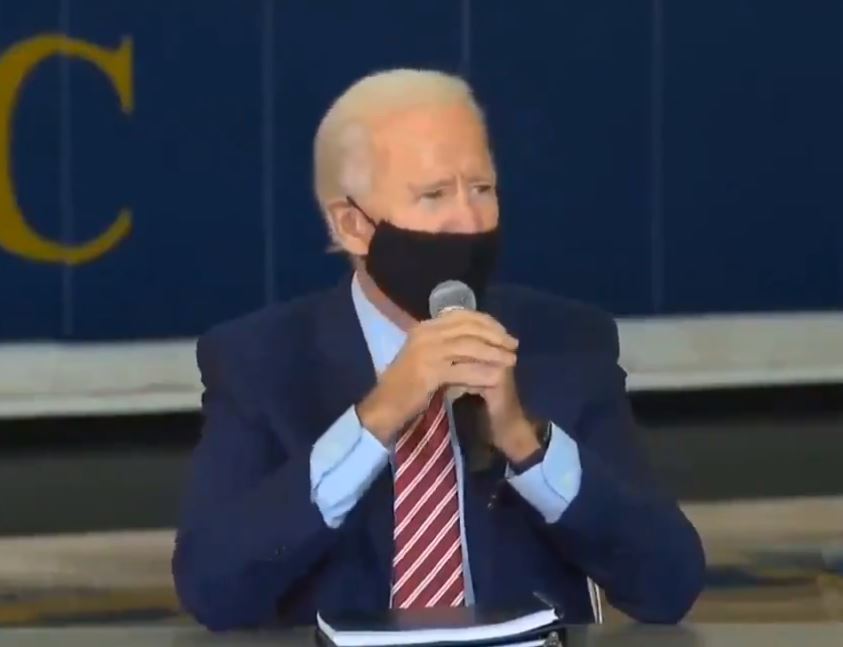 Biden was speaking about the problems the United States is facing due to the coronavirus pandemic.

In a video clip from the event, Biden said: "They're saying, 'Jeez, the reason I was able to stay sequestered in my home is because some Black woman was able to stack the grocery shelf'."

Biden said he was feeling "optimistic" about the US's ability to bounce back from the virus.

"And they say, 'Well, why in the hell would you say that Biden? You just talked about all these difficulties.'

"Well, I’ll tell you why. Because the American public, the blinders have been taken off.

"They’ve all of a sudden seen a hell of a lot clearer.

"Or a young Hispanic is out there, these dreamers are out there, 60,000 of them acting as first responders and nurses and docs.'

"Or all of a sudden people are realizing, 'My Lord, these people have done so much. Not just Black, White, across the board, have done so much for me. We can do this. We can get things done.' And I think they’re ready."

Biden was branded a "racist" for his comments on social media.

Political commentator Dave Rubin tweeted: "You ain't black if you ain't stocking a grocery shelf for Joe Biden", referring to Biden's comments about black people not being "black" if they didn't vote for him.

Ricochet editor Bethan Mandel posted: "This should spark a lot of conversation about the morality of the lockdowns and how we’ve made lower-income Americans into human shields."

Some said reaction to the comments would have been far stronger if Donald Trump had made them.

Others shared the video using the hashtag "#RacistJoe".

Last month, blundering Joe Biden made another gaffe by inaccurately claiming 200 million Americans – two-thirds of the population – had died of coronavirus.

The US has actually had around 210,000 deaths from the virus.

The embarrassing botch-up came during a campaign rally in Philadelphia, Pennsylvania.

He said: "If Donald Trump has his way, the complications from Covid-19, which are well beyond what they should be – it's estimated that 200 million people have died – probably by the time I finish this talk."

And this isn't the first time the Democratic presidential candidate has mixed up his facts about the pandemic.

In May, he was left red-faced saying that "we have over 120 million dead from Covid."

Last night, Biden slammed "macho" Donald Trump for taking off his face mask to pose for photographs as the President returned to the White House last night.

Trump, who was discharged from Walter Reed Army Medical Center three days after he was admitted with Covid-19, told Americans "not to be afraid" of the virus.

The Democratic presidential nominee was speaking at a town hall in the battleground state of Florida just minutes after Trump made his triumphant return to the White House.

"Anybody who contracts the virus by essentially saying: 'Masks don't matter, social distancing doesn't matter,' I think [he] is responsible for what happens to them," Biden said.

The 77-year-old former Vice President, again, lobbied for nationwide mandatory mask wearing and criticized those who refused to wear a face covering.

"What is this macho thing, I'm not going to wear a mask? What's the deal here? Big deal, does it hurt you? Be patriotic for God's sake! Take care of yourself, but take care of your neighbors," he told undecided voters in Miami.

BACK WITH A BANG

Trump wants to take on Joe Biden in another debate in nine days and hopes his coronavirus battle will help him win the election, according to his campaign.

The president's communications director says he plans on locking horns with his Democratic opponent Biden despite his Covid-19 diagnosis last week.

The president assured supporters he will be back campaigning before he was discharged from hospital, where he was receiving treatment for coronavirus.

His campaign has launched a fresh strategy to  help beat his Democratic rival in the polls, acknowledging that Trump now has an edge over Biden – an experience with the deadly virus.

She added that Joe Biden does not have “those firsthand experiences”.

This comes after other members of the campaign tested positive for the virus including its manager Bill Stepien and adviser Jason Miller.

A new poll has suggested that Trump has enjoyed a surge in popularity after he was admitted to the hospital.

The John Zogby Strategies/EMI Research Solutions survey shows Biden is ahead of Trump by only two points, suggesting that Trump is closing the gap between ahead of the elections.