The possibility of an “imminent attack,” perhaps within “hours,” loomed over Kabul’s airport on Thursday, according to a British official.

James Heappey, Britain’s armed forces minister, told the BBC on Thursday there was “very, very credible reporting of an imminent attack,” possibly targeting the airport in Afghanistan, where tens of thousands of people have been gathering over the past two weeks in hopes of leaving the country.

Other warnings in Western capitals addressed possible threats from the Afghanistan affiliate of the Islamic State group, The Associated Press reported.

The latest reports followed a U.S. Embassy warning in Afghanistan that U.S. citizens who might be gathered at specific gates of the Kabul airport should “leave immediately.”

Taliban spokesman Zabihullah Mujahid, however, dismissed the reports of possible attacks, calling them “not correct.” But he did not elaborate, the AP reported. 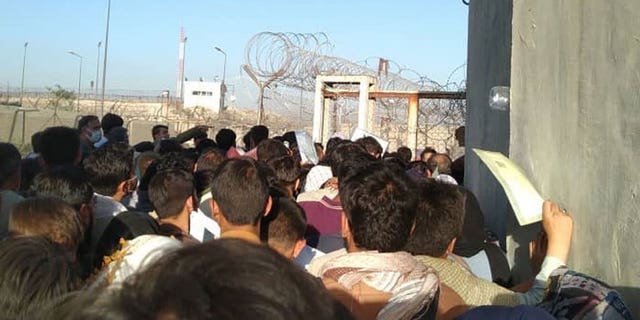 Desperate Afghans crowd into an area near a gate at the Kabul airport, Aug. 26, 2021. (We the People)

One Taliban official who spoke to Reuters said its own guards were “risking their lives” at the airport because of a possible attack by Islamic State Khorasan (ISIS-K), which the Taliban regards as an enemy.

In Belgium, Prime Minister Alexander De Cross said his country had received a warning from the U.S. that a possible attack involving an explosive amid the airport crowds in Kabul might be in the works.

“We received information at the military level from the United States, but also from other countries, that there were indications that there was a threat of suicide attacks on the mass of people,” De Cross said, talking about the threat around Kabul airport.

Other countries announced they were either ending or had already ended their evacuation operations from the Kabul airport.

Poland, Belgium and Denmark all said their final flights had departed, while France said it would conduct no more evacuations after Friday evening, citing the upcoming withdrawal of U.S. troops.

“From tomorrow evening onwards, we are not able to evacuate people from the Kabul airport,” French Prime Minister Jean Castex told RTL Radio in France.

Danish Defense Minister Trine Bramsen bluntly warned: “It is no longer safe to fly in or out of Kabul.” Denmark’s last flight carried 90 people plus soldiers and diplomats.

The warnings from European allies came as the U.S. struggled to evacuate thousands from the country following the Taliban takeover enabled by the withdrawal of U.S. forces.

Fox News’ Brie Stimson and The Associated Press contributed to this story.