Kabul: The United States on Sunday ordered six commercial airlines to help transport people out of Afghanistan as Washington sought to step up the pace of departures of Americans and at-risk Afghans from Kabul.

The Pentagon said it called up 18 commercial aircraft from United Airlines, American Airlines, Delta Air and others to carry people from temporary locations after they landed from Afghanistan.

Earlier on Sunday, the Taliban fired in the air and used batons to force people desperate to flee Afghanistan to form orderly queues outside Kabul airport, witnesses said, a day after seven people were killed in a crush at the gates.

While gunmen beat back the crowds, Washington said American troops were now getting large numbers of Americans into the airport.

A NATO official said at least 20 people had died in the past seven days in and around the airport. Some were shot and others died in stampedes, witnesses said.

A Taliban fighter at a checkpoint in the Wazir Akbar Khan neighbourhood of Kabul on Sunday.Credit:AP

Panicked Afghans have tried to board flights out, fearing reprisals and a return to a harsh version of Islamic law the Sunni Muslim group exercised while in power two decades ago.

One woman fleeing Afghanistan gave birth while on a US military evacuation flight out of the country on Saturday night.

“During a flight from an intermediate staging base in the Middle East, the mother went into labour and began having complications,” the Air Mobility Command, a division of the US Air Force, wrote in a tweet about the flight.

“The aircraft commander decided to descend in altitude to increase air pressure in the aircraft, which helped stabilise and save the mother’s life.”

The US Defence Department posted images of the woman being escorted by medical personnel off the aircraft at Ramstein Air Base in Germany.

The Air Force says both mother and baby, a girl, are now in good condition.

The image of the woman and her family being escorted off the Boeing C-17 transport aircraft is one of the latest stunning images emerging from the evacuation from Kabul as the Taliban takes control of the country.

They face opposition from forces in northern Afghanistan, which said this weekend they had taken three districts close to the Panjshir valley.

Anti-Taliban leader Ahmad Massoud said on Sunday he hoped to hold peace talks with the Islamist movement but that his forces in the Panjshir – remnants of army units, special forces and militiamen – were ready to fight.

“We want to make the Taliban realise that the only way forward is through negotiation,” he said. “We do not want a war to break out.”

The United States and other countries including Britain have brought in several thousand troops to help evacuate foreign citizens and vulnerable Afghans, but have been careful to avoid clashes with the Taliban.

“Managing chaos outside Kabul airport is a complex task.”

Afghans who have fled have spoken about their despair at leaving loved ones behind.

“It was very difficult to leave my country,” one veiled woman told Reuters in Qatar. “I love my country.”

The World Health Organisation and UN children’s agency UNICEF called for a humanitarian air bridge to deliver aid to Afghanistan to help more than 18 million people in need.

On Saturday, the United States and Germany told their citizens in Afghanistan to avoid travelling to Kabul airport, citing security risks, but Washington said on Sunday the situation had improved.

The United States has “secured the capacity to get large numbers of Americans safe passage through the airport and onto the airfield”, White House national security adviser Jake Sullivan told CNN’s State of the Union. 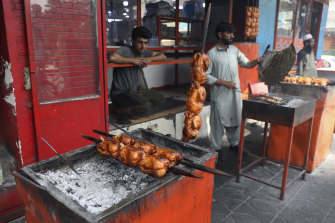 Life goes on for some people in Kabul as they wait to see what changes Taliban rule will bring.Credit:AP

Sullivan also said the there was also a risk of Islamic State attacks on Kabul or its airport.

“The threat is real, it is acute, it is persistent and it is something that we are focused on with every tool in our arsenal,” he said. “We are working hard with our intelligence community to try to isolate and determine where an attack might come from.”

A Pentagon spokesman said the United States would deploy 18 commercial aircraft to transport people who have been flown to temporary locations from Afghanistan. 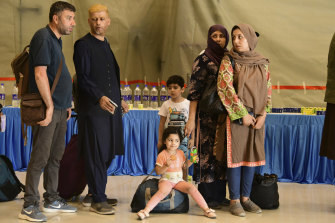 People evacuated from Kabul arrive at Hindon Air force base near New Delhi, India on Sunday. Their flight carried 168 people, according to an Indian government spokesman.Credit:AP

President Vladimir Putin rejected the idea of sending evacuees to countries near Russia, saying he did not want “militants showing up here under cover of refugees”.

The Taliban’s seizure of power came as US-led forces were withdrawing after a 20-year war that President Joe Biden sought to conclude.

Taliban leaders are meanwhile trying to hammer out a new government, and the group’s co-founder, Mullah Baradar, has arrived in Kabul for talks.

The Taliban was last in power in Afghanistan from 1996 to 2001, during which time the group stopped women from working and girls from going to school, in addition to a raft of other hardline laws.