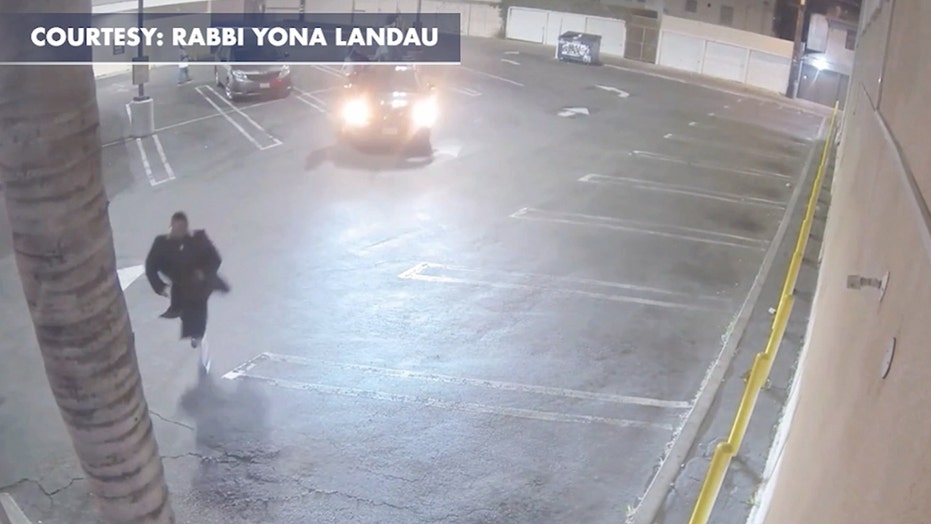 ‘I thought they were going to kill me,’ victim tells Fox News

Chilling surveillance footage obtained by Fox News shows the moment a Jewish man in Los Angeles was chased by two cars bearing Palestinian flags near his home earlier this week as they chanted “Allahu akbar” in an apparent attempt to run him over.

The man, who asked to remain anonymous, told Fox News he was walking from his home to synagogue on Monday night during the Jewish holiday of Shavuot when he noticed a car speeding toward him.

“I’ve taken this route a million times and I’ve never been afraid,” he said. “I was waiting by the light for it to change and suddenly I saw a bunch of cars coming and I see out of the corner of my eye they were waving the Palestinian flag. They started speeding up and I heard them chanting ‘Allahu akbar.’ That’s when I started running for my life.”

Surveillance footage recorded from a nearby synagogue shows the man running into a Bank of America parking lot. He is being chased by two speeding cars with several Palestinian flags displayed.

“I ran as fast as I could,” he said. “They were picking up speed and I really thought they were going to run me over, that it would all be over.”

A Los Angeles man is seen fleeing as a vehicle chases him in a parking lot in an incident captured by a security camera.

The man said he even recited the “Shemah” prayer, a verse commonly recited by Jews when they find themselves on the cusp of death.

“I was petrified,” he said. “I just kept thinking, ‘I’m a father of six and I want to come home to them tonight.’ I thought they were going to kill me. My mind was racing.”

The longtime Los Angeles resident managed to lose his tail when he ran into the synagogue and yelled for those around to help him secure the entrances.

The man has returned to the synagogue since then, but finds himself “looking in every direction” and often “hides behind trees” when vehicles approach, he said. 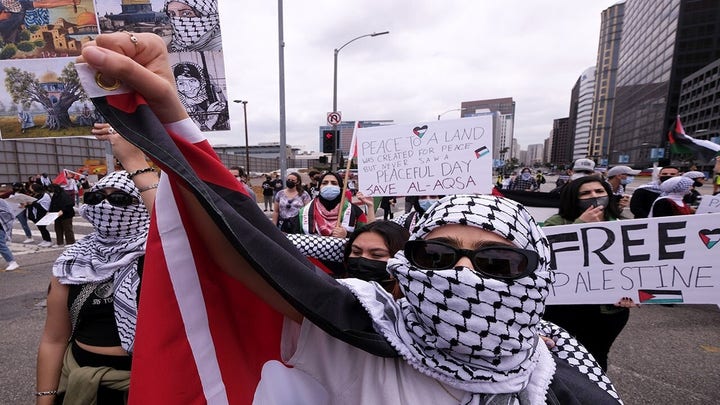 “I thought to myself, America has always been about freedom of religion,” he said. “You’ll never see any Jews in my community attacking pro-Palestinians in a residential neighborhood like you saw here. And yet, I don’t feel safe walking around.”

The Los Angeles Police Department has opened an investigation into the incident. Police said they couldn’t give specifics, but top brass told community leaders that they’re being very aggressive in finding the assailants.

The incident came just one night before a pro-Palestinian mob attacked Los Angeles Jewish diners in a brawl that was caught on camera, marking the latest U.S. episode in a troubling string of anti-Semitic attacks over tensions in the Middle East.

The Los Angeles Times reported that a witness, who asked to remain anonymous for safety reasons, said some people from the caravan threw bottles and chanted “death to Jews” and “free Palestine.”

“Somebody in one of the cars driving by started throwing glass bottles or glass cups at the tables and they shattered everywhere,” a female diner, who didn’t want to be identified, told KCBS-TV.

Several vehicles stopped, and men who got out began running toward the tables and began asking “Who’s Jewish?” the woman said. KTLA-TV reported that another witness, who also was not identified, said fighting erupted when two men replied that they were.

Cellphone footage depicting the brawl from different angles showed a man being punched on a sidewalk.

The man, who wished to be identified only as M, told KABC-TV he was at the restaurant helping plan an upcoming wedding with four Jewish friends when the car caravan rolled up. Video showed some men dressed in black getting out of a car and pushing M’s friend to the ground.

M was followed to his car, punched and pepper-sprayed, and was treated at a hospital. No arrests were immediately made, but police say the investigation is ongoing.