‘We’re going to leave a lot of people who helped us behind’: Lindsey Graham warns Taliban will take thousands of prisoners and ISIS will attack airport if Biden does not change August 31 deadline

United States Senator Lindsey Graham slammed President Joe Biden’s August 31 deadline to evacuate Americans and Afghanis from the country, and warned it will see the Taliban attack those left behind, and take ‘thousands of hostages.’

In an interview with Fox and Friends on Sunday, the South Carolina Republican said the United States and allied forces will not be able to get all of the Americans and Afghanis who helped Americans over the 20-year war out of the country by next Tuesday. He said people will inevitably be left behind to live under Taliban rule.

‘If you believe in merit-based immigration, which I do, the people who served with us in Afghanistan should be at the top of anybody’s list,’ he added. ‘You know you get points for joining the American military. How many points should you get to serve with Pete Hegseth and all these other people for years risking your life?’

‘So I think the Taliban is slow-walking us,’ Graham said. ‘They’re going to give us an ultimatum [of] August 31st, and Biden will blink, and they’ll have thousands of hostages to bribe us and hold us hostage down the road.’ 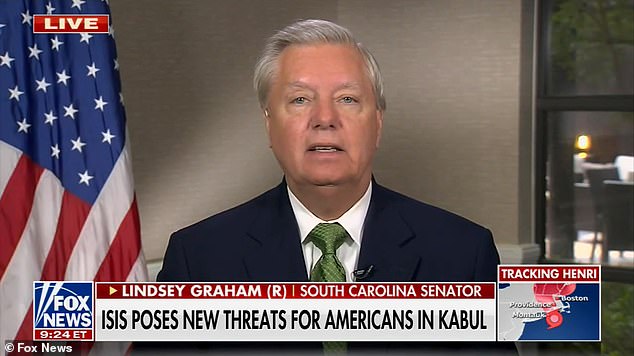 Senator Lindsey Graham on Sunday slammed President Joe Biden’s plan to end evacuations from Afghanistan on August 31, saying it will only lead to ISIS attacks and the Taliban taking prisoners from those the Americans left behind

Graham also warned of a ‘bottleneck at the airport’ in Kabul, where Afghanis are penned-in up hoping to escape, ‘that is ripe for a suicide bombing attack by ISIS.’

Graham explained that the Taliban and ISIS are enemies, ‘so if they could attack the US, ISIS, that would be a twofer. (two-for-one)

‘And there’s a jihadist Olympics going on throughout the world between al Qaeda and ISIS and other groups,’ he continued, ‘and the gold medal goes to the group that can do the most damage to us.’

‘I think ISIS is going to hit us on the way out if we don’t change our footprint and our strategy, and this will haunt us for decades,’ Graham said. ‘Jihadists will be on steroids all over the world.

‘I would say this, without soldiers on the ground with a CIA presence helping them, the likelihood of another 9/11 has gone up by 70 or 80 percent.’

Graham continued to say that former President Donald Trump ‘would give the Taliban an ultimatum were he still in power.

‘He’d have a situation up where it would be hard for them to attack us,’ Graham claimed. ‘People respected him, they feared him, and the problem we have as a country is our commander in chief, Joe Biden, is the intelligence failure. The intelligence failure regarding Afghanistan and Iraq is Joe Biden himself.

‘He doesn’t have the ability to put [the] puzzle together,’ Graham said. Trump originally vowed to withdraw US troops from Afghanistan by May 1, with Biden following-through on a delayed timescale. 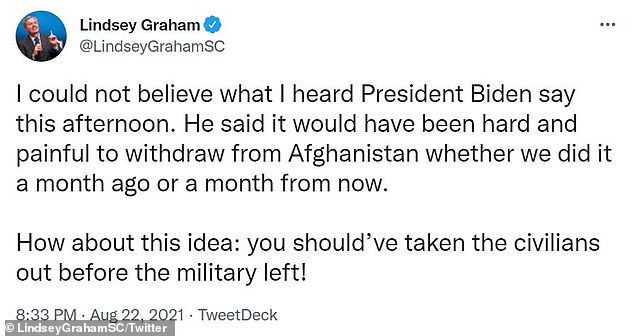 In a series of tweets that day, he said Biden should have taken civilians out of the country before withdrawing American troops

Graham has been critical of the president’s evacuation plans over the past few days, as many Afghanis continue to struggle to get out of the country.

On Friday, he told Fox and Friends, he thought Biden should be impeached for his evacuation plans, saying: ‘If we leave any Americans behind – if we leave thousands of those Afghans who fought along our side behind bravely – Joe Biden deserves to be impeached for a higher crime and misdemeanor of dereliction of duty.

‘If we leave one American behind, if we don’t get al those Afghans who stepped up to the plate to help us out, then Joe Biden, in my view, has committed a high crime and misdemeanor under the Constitution and should be impeached,’ he later clarified, asserting that it is the United State’s duty to get every American out of the country, but the US is also ‘honor-bound’ to do the same for all the Afghanis who fought alongside American soldiers.

Then on Sunday, following a news conference in which President Joe Biden said he was considering extending the August 31 deadline, Graham tweeted: ‘I could not believe what I heard President Biden say this afternoon.

‘He said it would have been hard and painful to withdraw from Afghanistan whether we did it a month ago or a month from now. How about this idea: You should’ve taken the civilians out before the military left!

‘An ROTC cadet can understand that the day you pull the plug on our military presence, you made this evacuation into the disaster of all disaster,’ he continued.

‘Just remember when Joe Biden tells you this was well-executed, he’s the same man who said 48 hours ago there was no al-Qaeda in Afghanistan.

‘The ultimate intelligence failure is Joe Biden himself.’

The  country is currently prioritizing American citizens, green card holders, their spouses and their children, the Journal reports, with many of the Afghans who were employed by the embassy or other U.S. agencies still waiting to be rescued.

‘They’re getting very worried,’ an unnamed official told the Journal. ‘These are the people we could have helped out weeks ago.

‘Unless we evacuate within a day or two, it’s not going to end well.’

The official added that the Taliban are already screening documents outside the Kabul airport, and there is concern that the group may raise objections when it comes time to evacuate locally-employed Afghan staff in higher numbers.

State Department spokesman Ned Price said that the administration is now working to expedite the screening process for Afghans, but said the ‘rigorous vetting’ required before getting admission to the United States takes some time.

‘That vetting, by and large, is taking place in third countries,’ Price said. 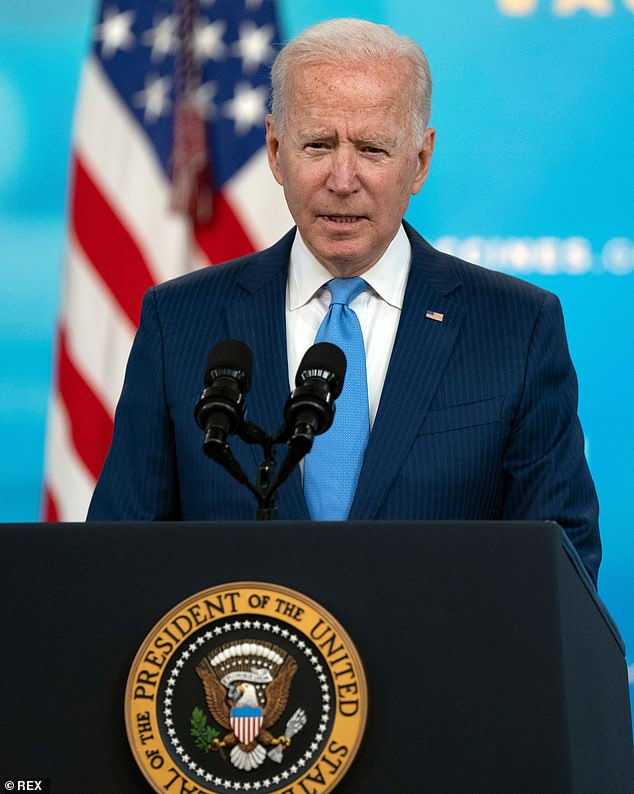 On Sunday, President Joe Biden announced that his administration is discussing a possible extension of the August 31 deadline, and he is set to speak with leaders of the Group of Seven about the evacuation procedures on Tuesday

Meanwhile, President Joe Biden announced on Sunday his administration is discussing a possible extension of the August 31 deadline.

He is set to convene a virtual meeting with the Group of 7 on Tuesday to discuss coordination and evacuation plans, as well as the need for humanitarian assistance.

But the Taliban has warned that it would not recognize any extension of the United States’ evacuation plans, nor would it ensure that forces that stay beyond August 31 won’t be subject to attack.

‘We are well aware of the stated desire of the Taliban to have this mission completed by the 31st,’ Pentagon spokesman John Kirby told the Journal on Monday.

He said they are aiming to have the mission completed by then, and any need for an extension would be assessed in the coming days as officials try to work out how many Americans are actually in Afghanistan.

Some have estimated there were 10,000 to 15,000 in the country before the evacuations began, but National Security Adviser Jake Sullivan said that the exact number is hard to assess because many Americans did not register with the embassy when they arrived in the country and didn’t de-register when they left.

In the meantime, Kirby said, the US will continue talks with the Taliban.

‘Ultimately, it will be the president’s decision how this proceeds, no one else’s,’ he said, adding: ‘We believe that we have time between now and the 31st to get out any American who wants to get out.’

The final evacuation was initially intended to ramp up around August 27, the Journal reports, ince it take several days to get thousands of troops, personnel and their equipment out of the country, but the withdrawal initiation date was pushed back on Monday to August 29, further suggesting the withdrawal could extend beyond August 31. 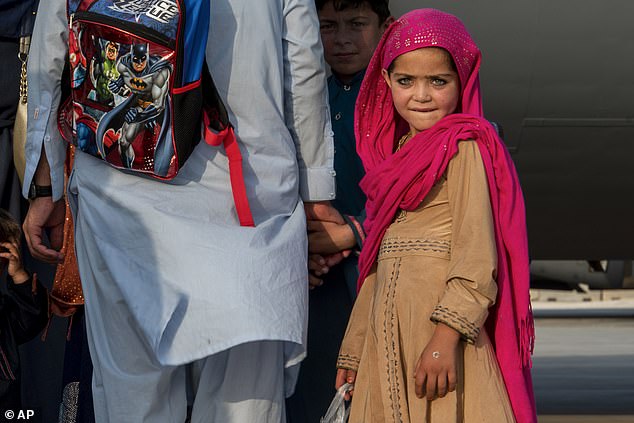 A young Afghani girl waited with her family to board a plane at Qatar, where space is filling up with refugees in need 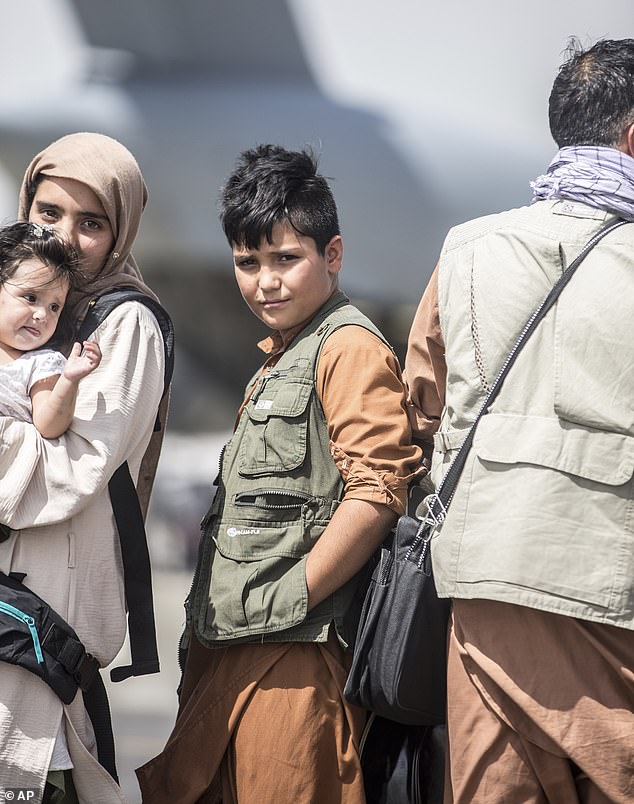 But the country is already struggling to find destinations for the refugees, as bases in Qatar and Germany are quickly filling up.

To date, the Journal reports, eight transit hubs in six countries are hosting more than 17,000 evacuees and have beds available to accept more.

That capacity is expected to increase as hubs open in more countries, with another 8,000 beds available within the next day, State Department officials report.