Flurries of snow have fallen over London for a second day after temperatures dropped -9C in Northumberland, with Britain bracing for a so-called ‘Beast from the East II’ which could bring another inch of the white stuff today.

The sudden stratospheric warming, or SSW, began on Tuesday and could trigger weather changes that would lead to a severe cold snap in Britain.

Dr Richard Hall, an expert in SSWs from the University of Bristol, said it ‘loads the dice’ or ‘tips the odds’ in favour of another blast of heavy snow and sub-zero temperatures from Siberia.

The Met Office has issued weather warnings for some snow and widespread icy conditions.

Up to 3cm (1.2in) of snow could fall on high ground, with scenes in London this morning showing just a light dusting settling on the ground.

Britain recorded lows of -12C in Loch Glascarnoch yesterday, with freezing temperatures in London, while Manchester and Cardiff woke up to the mercury dropping to -2C – after dipping to -9C in Northumberland overnight.

Temperatures have remained in the single digits for most of this week, yesterday the highest recorded temperature was just 6.7C, in Ballywatticock, Northern Ireland. 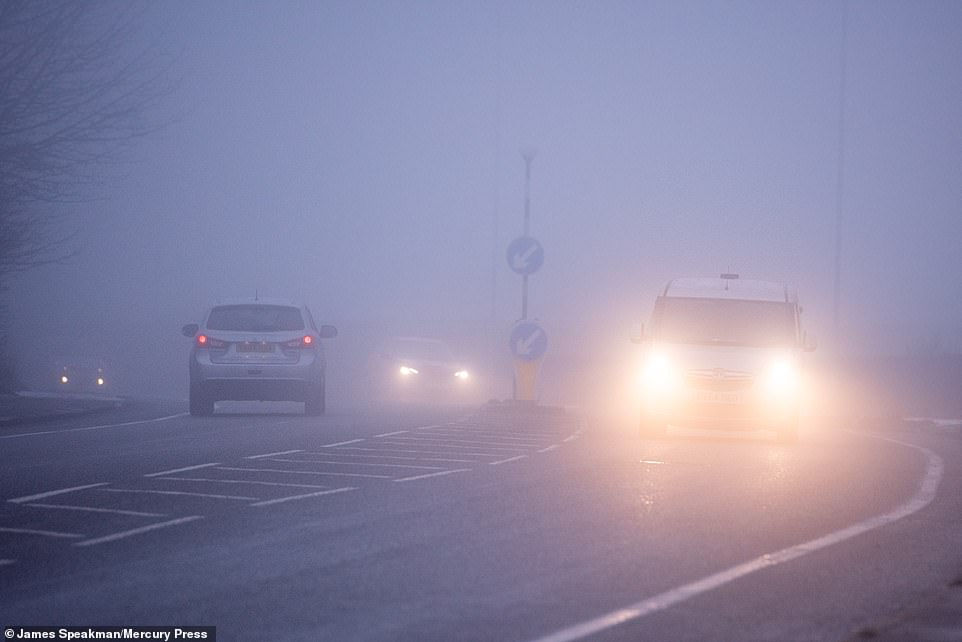 Manchester woke up to temperatures -2C this morning, with fog near Bolton (pictured) as some motorists still braved conditions to go to work during England’s third coronavirus lockdown 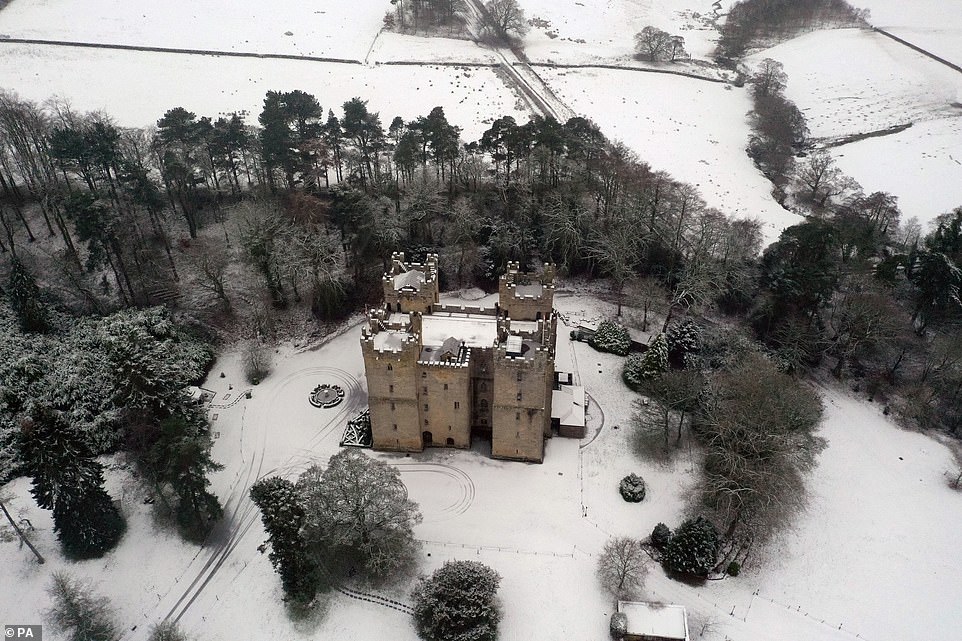 Temperatures dropped to -9C in Northumberland, with snow falling at Langley Castle, near Haydon Brige, overnight 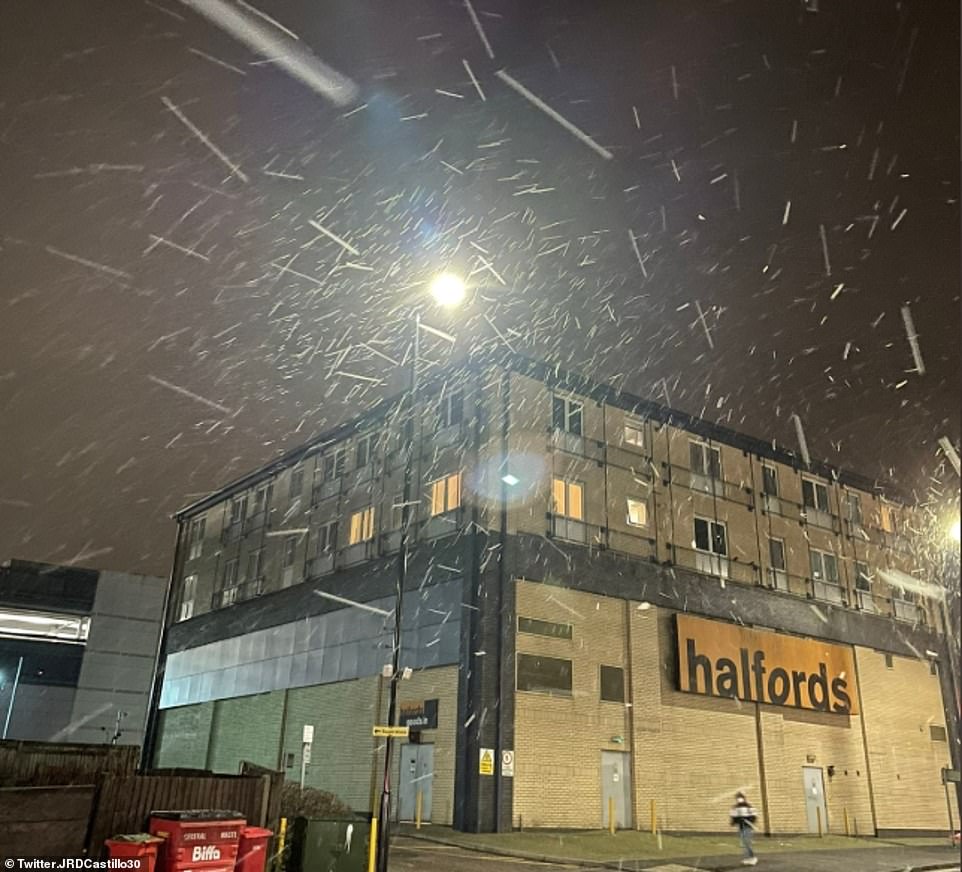 Snow fell over South London on Thursday morning, as swathes of England awoke to warnings of ice lasting most of today 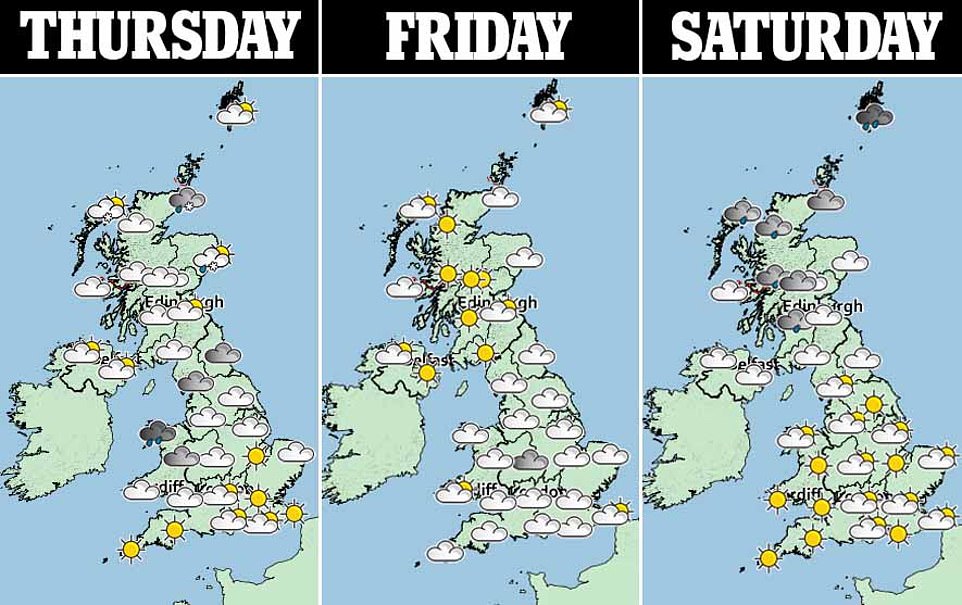 This week’s cold snap has snow and ice blanket large parts of Scotland – but a group of determined schoolgirls headed out to ensure their community was safe.

Skye, 6, and Amelia-Lily Henry, 8, set out with pals Sophia, 6, and Louisa Byrne, 9, set out in -3C temperatures on on Monday and Tuesday with bags of salt to grit their local street.

Mother Charlotte Fisher, 29, siad: ‘With it being lockdown, I asked my girls if they would like to go out to help with some gritting to stop the elderly from hurting themselves.

‘They loved the idea, it also gave them a bit of exercise as well as helping our community.’

Flurries this morning come after a stunning winter vista was snapped in North Wales, by a lone cyclist on a lockdown ride.

David King used a camera fitted to a drone to take the photograph after a brief heavy snowfall transformed a picturesque hillside into a winter wonderland.

Mr King, 41, from Wrexham, was staying with his parents during lockdown last month when he went for a bicycle ride in the Clwydian Range.

He was the only person in this remote spot and used his drone camera to record both his solitude and the beauty of the landscape as a ten-minute blizzard turned the forest from green to white.

‘Riding in the snow was very peaceful,’ he said. ‘Everything seems to be calmer when the snow is present.’

The weather warning covers northern and eastern England, most of the Midlands, Wales and the South West. Slightly improved temperatures are predicted next week.

For what follows that, meteorologists are closely monitoring polar weather patterns.

A study by experts at the Universities of Bristol, Exeter and Bath shows how dramatic meteorological changes above the North Pole can have severe consequences for the weather in the UK. 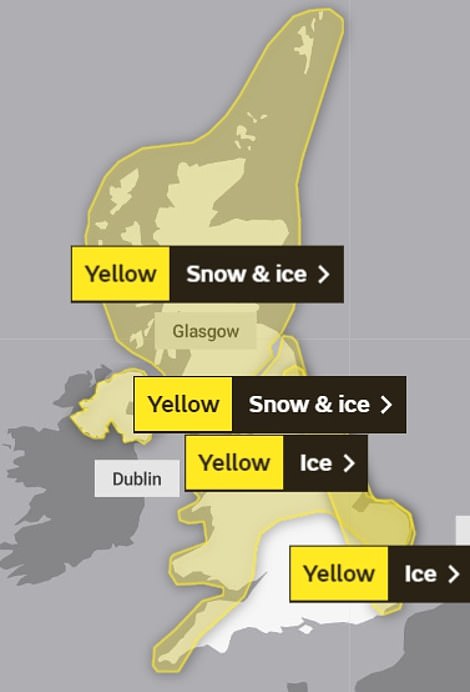 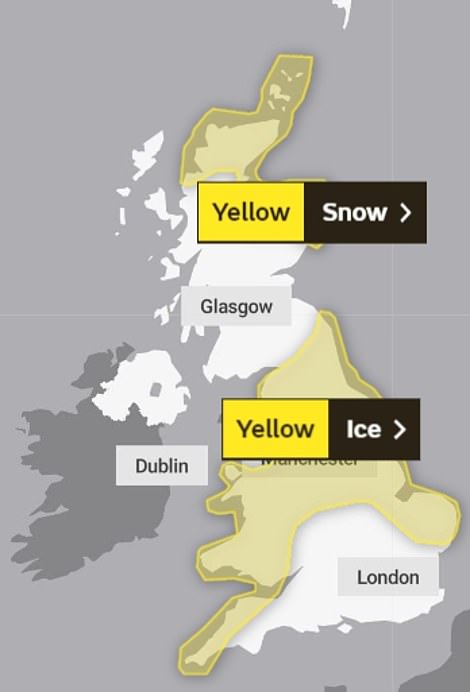 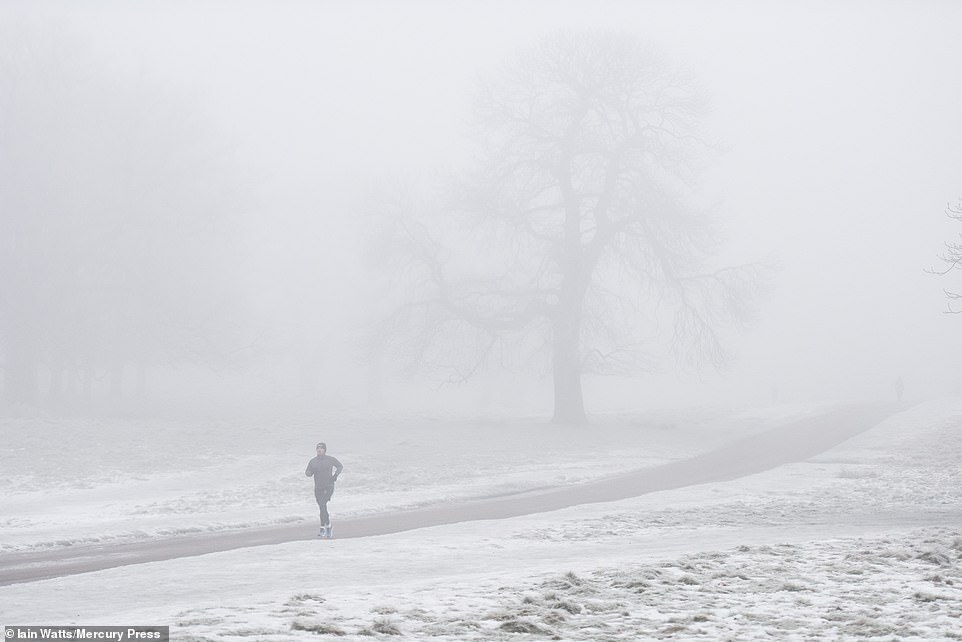 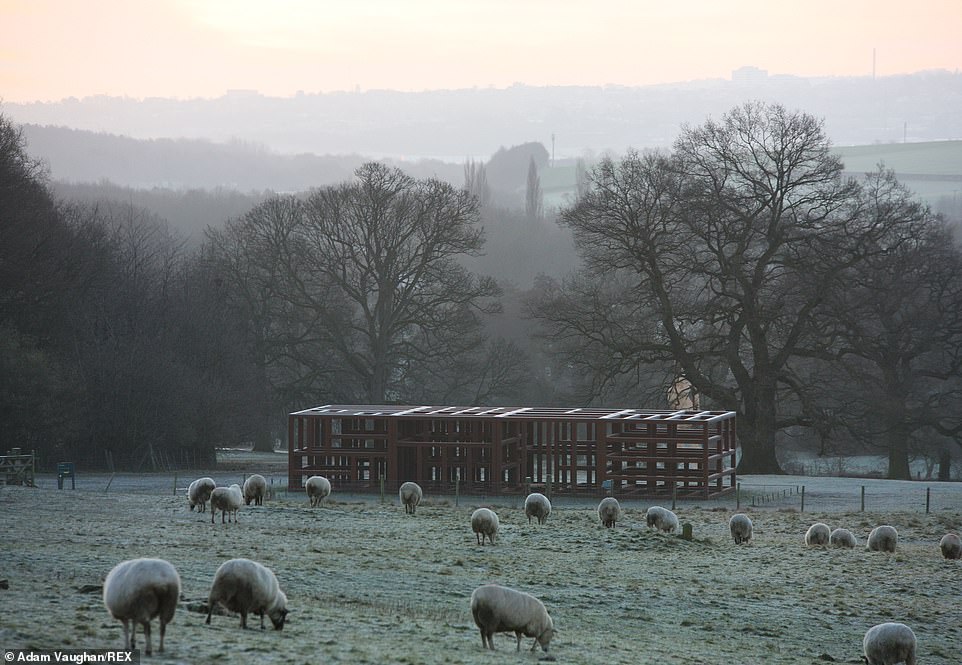 It was a frosty start in West Bretton, Wakefield, this morning, as swathes of northern England woke up to a yellow weather warning for ice, which stretches across the west and east coasts 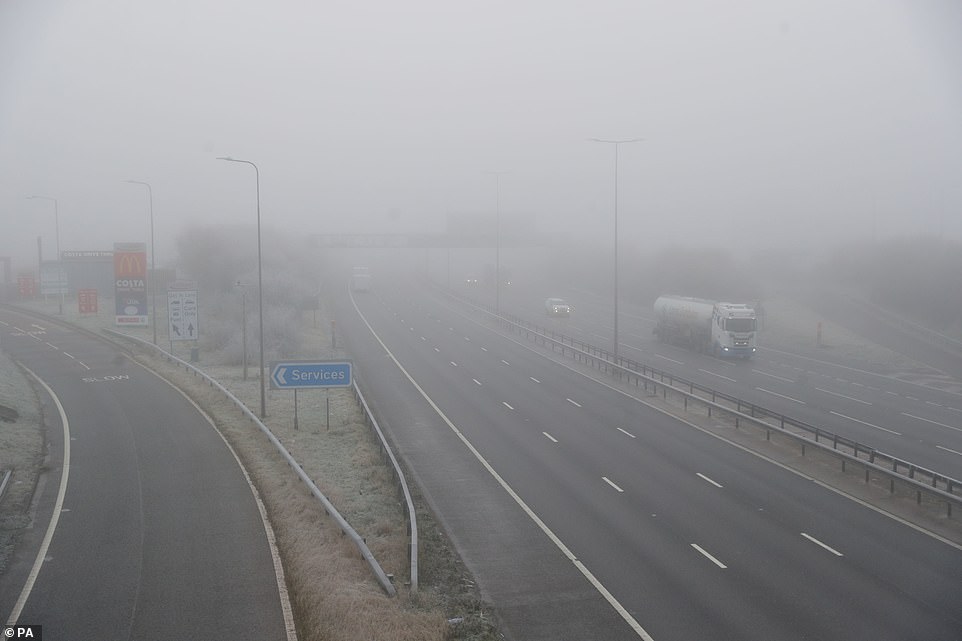 Fog has cut visibility on the M5 in the West of England, where a yellow weather warning for ice is in place throughout today 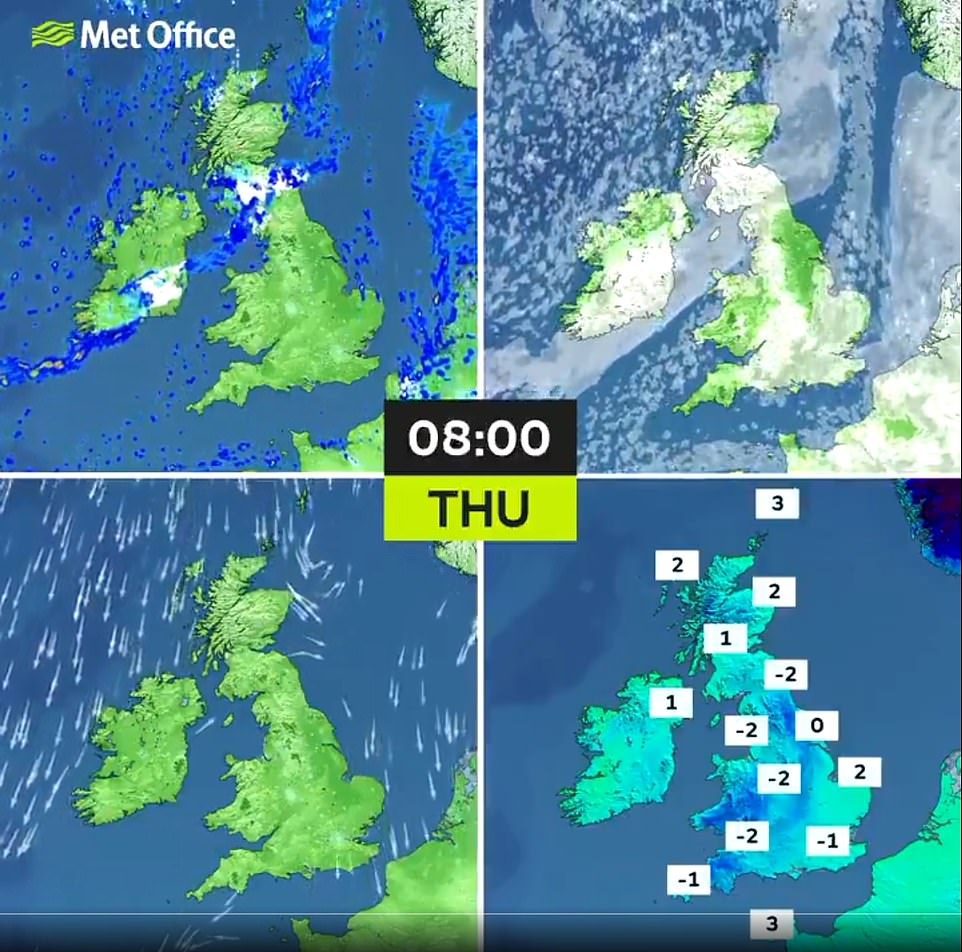 Large parts of Britain awoke to temperatures below freezing this morning, with highs only reaching 3C as winter takes hold 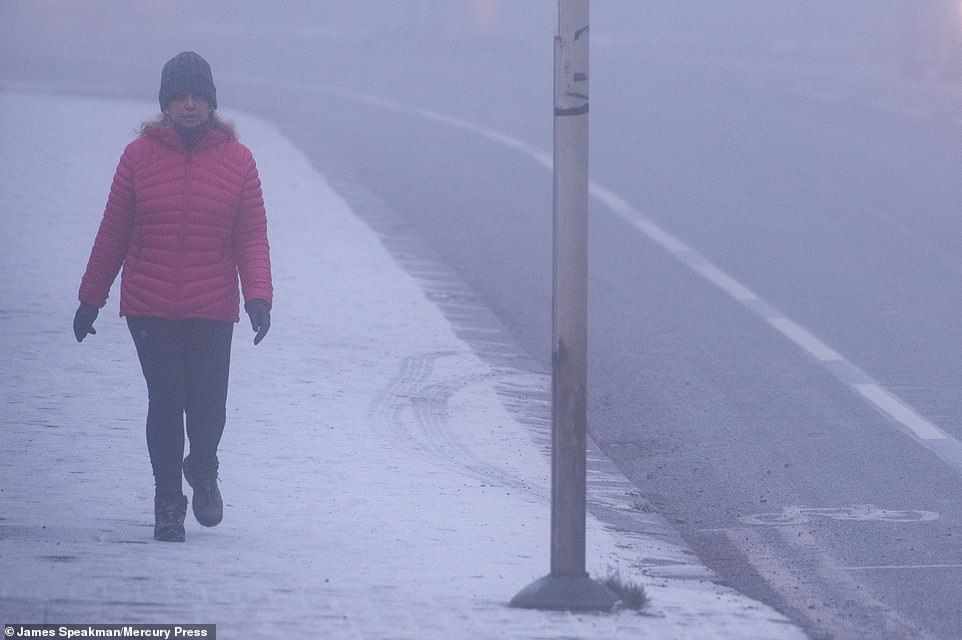 The Met Office has issued weather warnings for some snow and widespread icy conditions. Up to 3cm (1.2in) of snow could fall on high ground 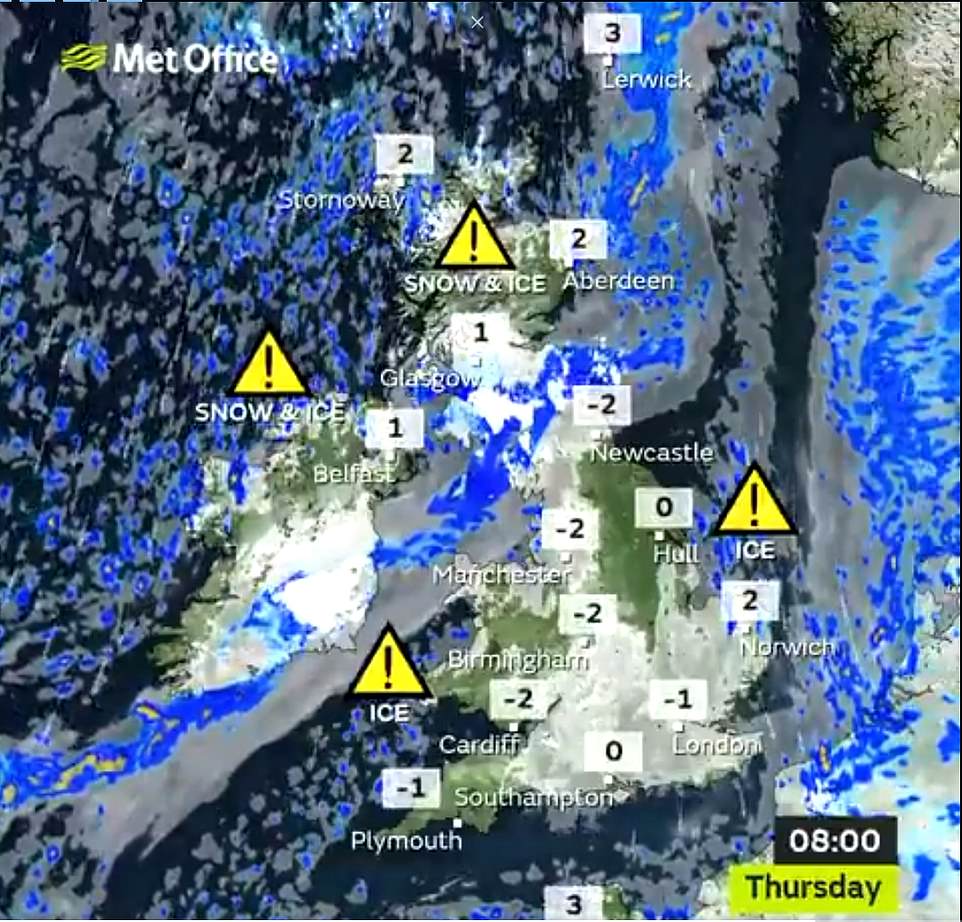 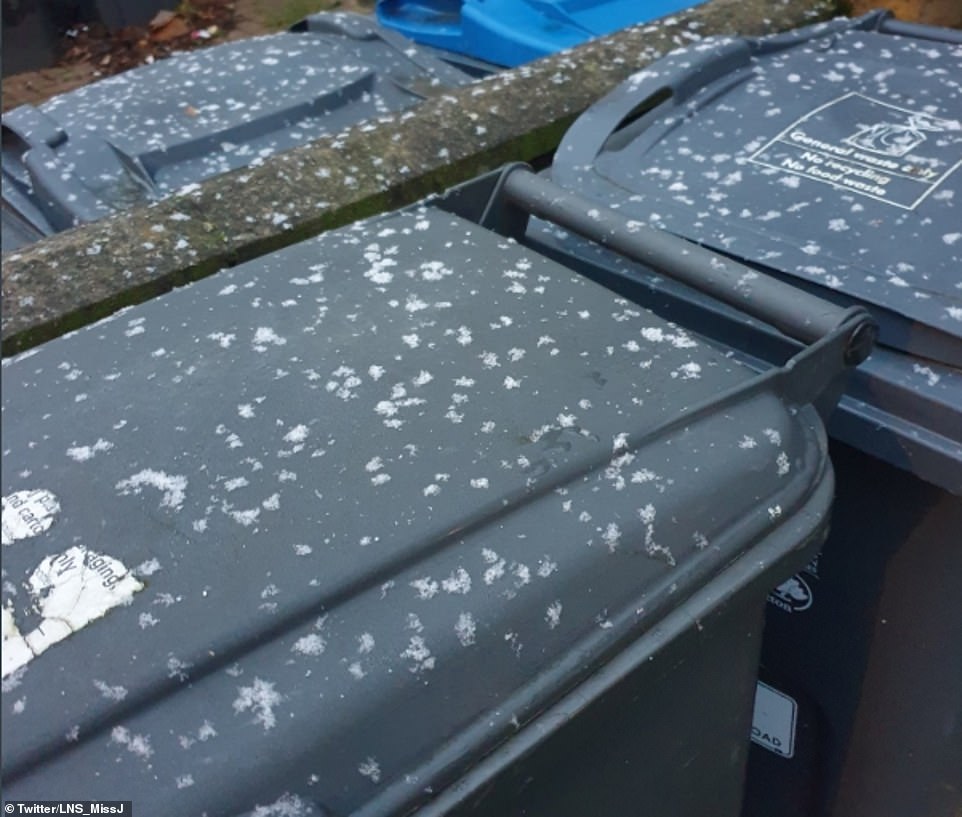 Snowfall in London wasn’t quite as impressive this morning as yesterday, with just a few flakes settling over one Londoner’s bins 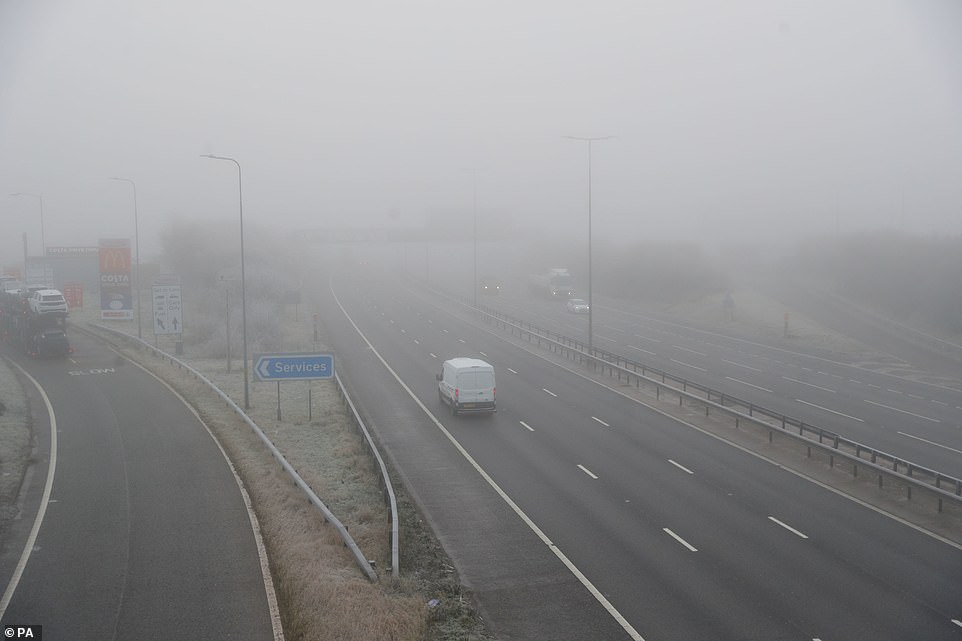 As fog lined the M5, Britain is bracing for a cold snap that could bring snowy conditions similar to the so-called Beast from the East which caused travel chaos back in 2018 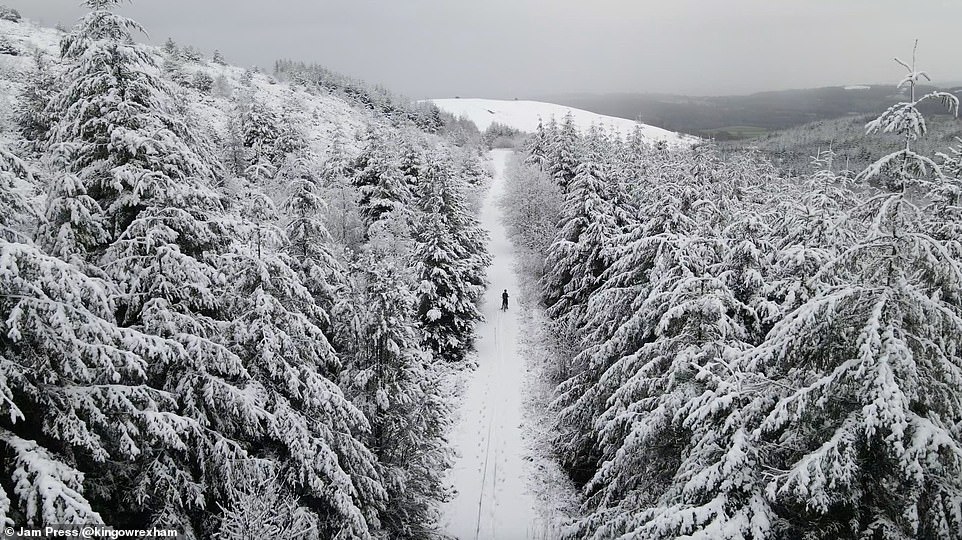 Drone footage in North Wales showing a cyclist riding through a snowy forest. David King, from Wrexham, decided to take a bike ride into the Clwydian Range next to the Moel Famau mountain and brought his drone along on Wednesday

During an SSW the stratosphere – the layer six to 31 miles above the Earth’s surface – can increase in temperature by up to 50C over a matter of days.

This disturbance can travel down through the atmosphere to the Earth’s surface and cause shifts in the jet stream, the fast-moving air currents that cool Europe.

UK experts studied 40 stratospheric warming episodes from the last six decades in the latest study, published in the Journal of Geophysical Research.

Dr Hall said an SSW happens ‘every two years in three’ and one is ‘taking place at the moment’. 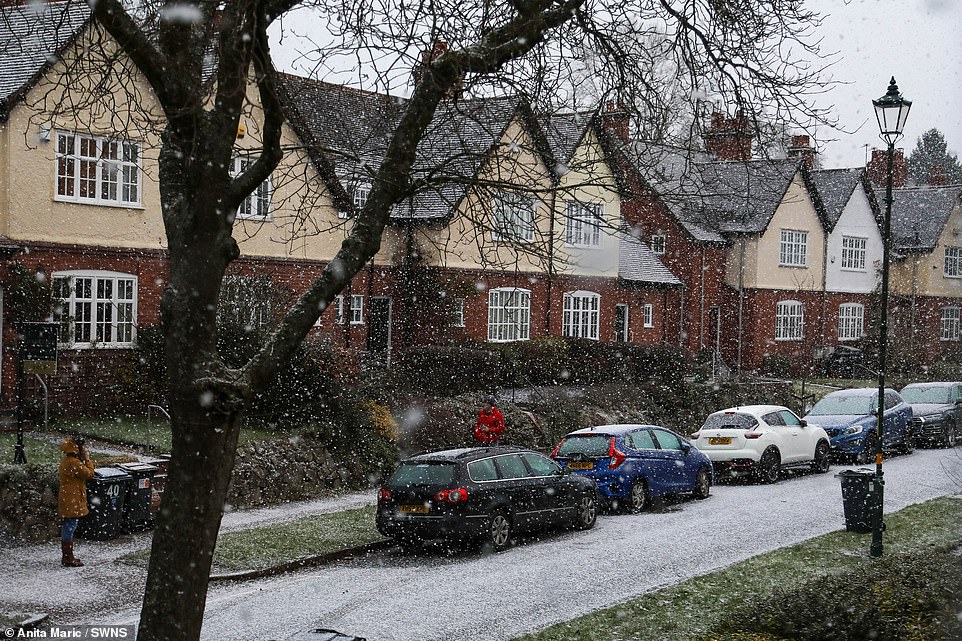 Pictured: Snowfall in Birmingham on Wednesday after ice warnings were put out for most of the north east of the country 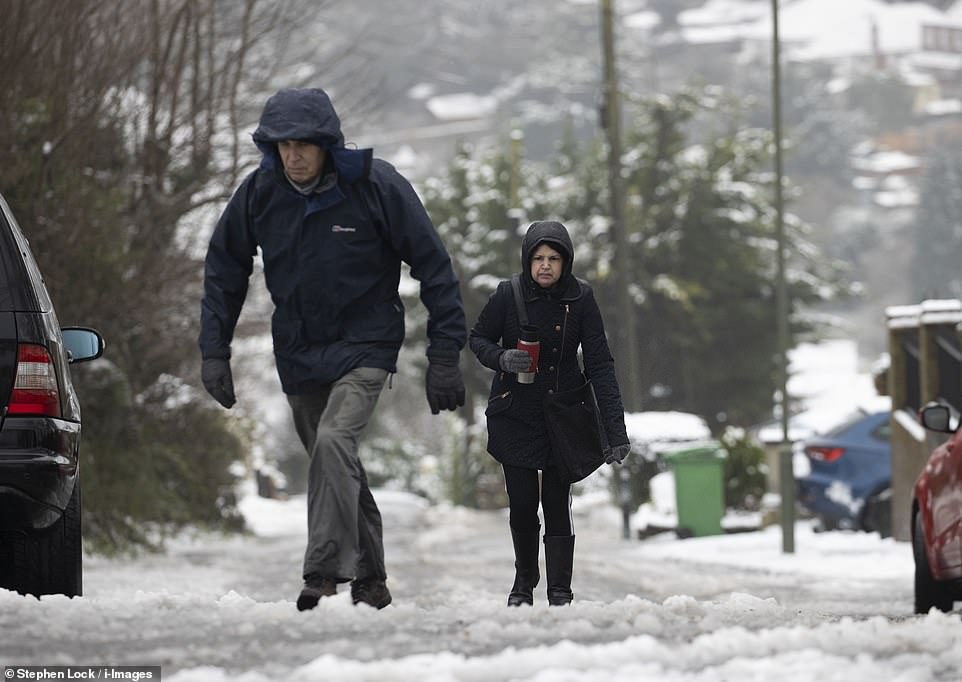 Two people walk up a slippery hill covered in ice amid snow fall at Biggin Hill in Kent. The weather warning covers northern and eastern England, most of the Midlands, Wales and the South West

In 2018 there was an SSW event two weeks before the ‘Beast from the East’ brought 50cm (20in) snowfalls.

However Dr Hall said only two thirds of SSWs reach the surface and the current one could ‘just peter out’.

He added: ‘The main area of impact is over Siberia where you get intense cold and that then extends westwards toward Europe.

‘We are right on the edge of this and so slight variations can affect if it reaches us.’