Londoners ARE on the move (just not to the office): Tube ridership is still just HALF pre-pandemic levels despite push to get staff back to desks – but phone data shows leisure activity is now ABOVE pre-lockdown levels

Commuters are pouring back onto the London Underground this week with the network having had its busiest day in 18 months – but passenger numbers are still only at less than half the pre-pandemic level.

TfL said that when compared with pre-pandemic figures for September 9, 2019, travel was at 45 per cent on the Tube and 64 per cent on the buses up to 10am, amid the end of the summer holidays and the return of schools.

But Apple mobility data – which monitors directions requested on its Maps app – showed that over the past month, people have been using public transport, driving or walking more than before the pandemic began in early 2020.

The Apple data is more likely to show figures for leisure trips, given that people will generally not request directions to and from the office given that this is a journey they regularly carry out.

It comes as motorists have contended with narrow roads in parts of the capital over the past 18 months with more than 60 miles of new or upgraded cycle lanes having been built or being under construction since May last year.

The cycle lanes and ‘Low Traffic Neighbourhood’ (LTN) schemes in some areas have sparked anger among drivers because of a rise in congestion, lack of access for emergency services and financial damage to businesses. 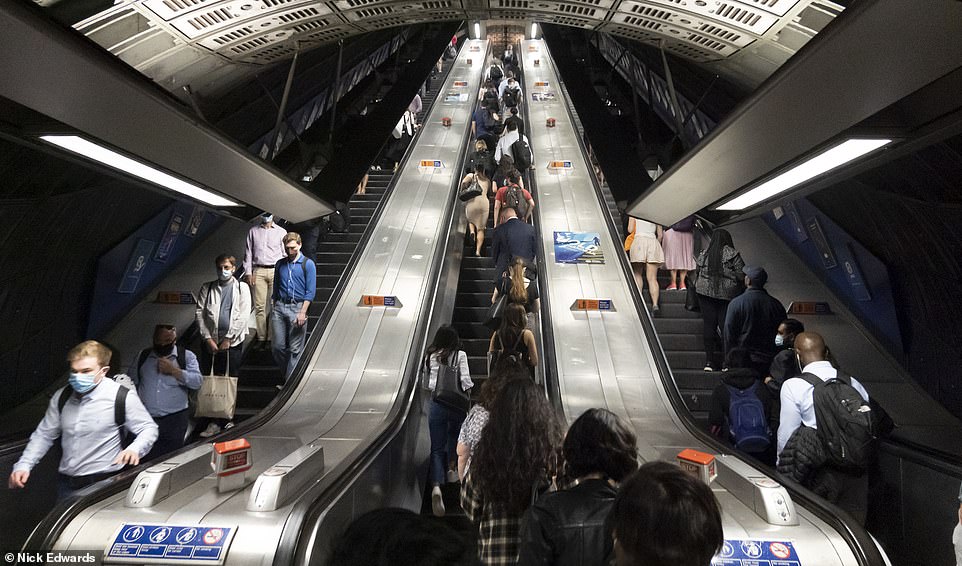 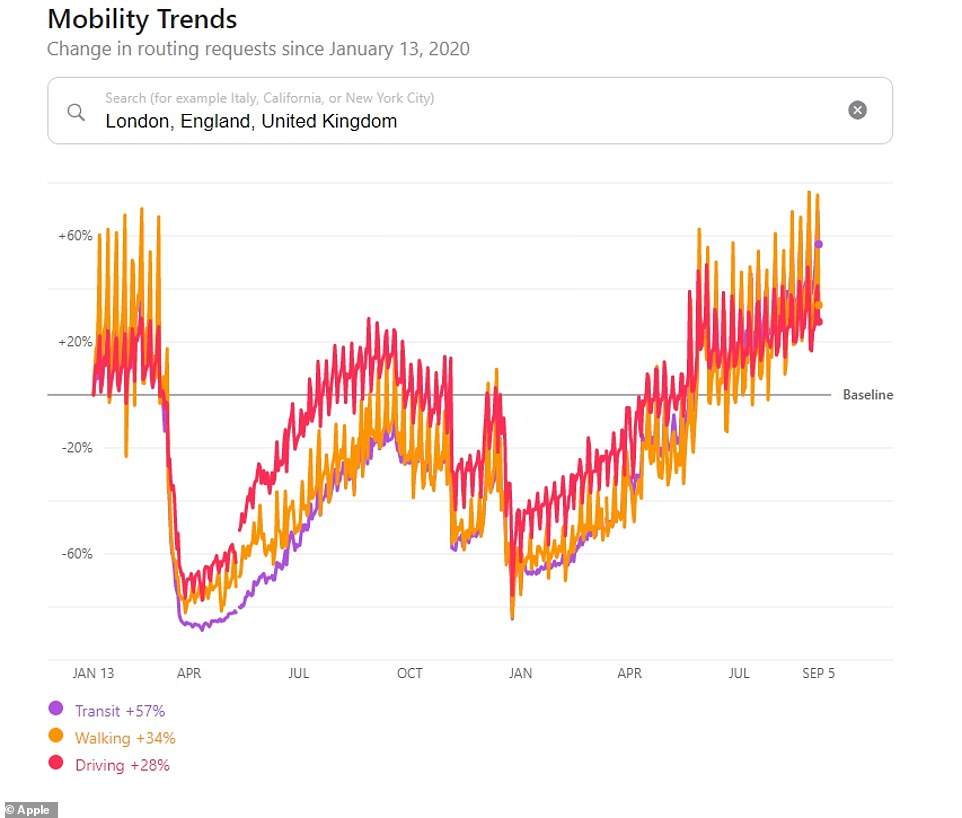 Apple mobility data – which monitors directions requested on its Maps app – showed that over the past month, people have been using public transport, driving or walking more than before the pandemic began in early 2020 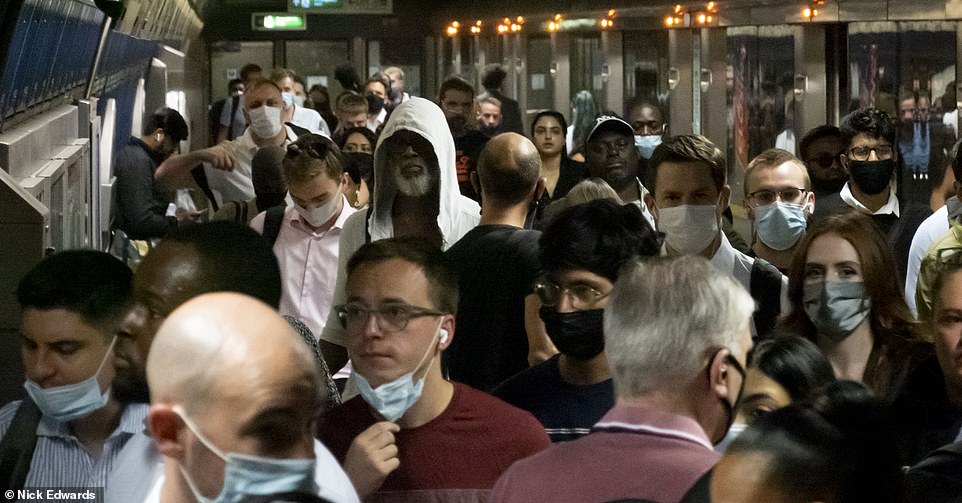 Also today, data from location technology firm TomTom showed congestion hit 76 per cent during the morning rush hour into London at 8am, well above the 67 per cent on the same day and time in 2019. The 2020 figure was 53 per cent.

This was a surge on yesterday’s TomTom figure for 8am, which was 61 per cent, just below the 63 per cent on the same day and time in 2019, and 49 per cent in 2020 – suggesting more people are on the roads than yesterday.

Britons are taking the train for leisure journeys more than before pandemic, says LNER

Britons are now taking the train for leisure journeys more than before the pandemic, an operator said today.

London North Eastern Railway (LNER) said it was seeing ‘strong demand’ for services – with business travel also growing and now at 50 per cent of pre-pandemic levels.

Bank holiday bookings with LNER saw 370,000 reservations made over the August bank holiday, from Thursday, August 26 to Monday, August 30.

Services between England and Scotland were most popular, with trains to and from London and Yorkshire also seeing ‘high levels of demand’.

LNER managing director David Horne said: ‘There has been a great deal of pent up demand as people want to make trips to see friends, or loved ones or to enjoy a break or day trip. Since April this year, more than five million journeys have been enjoyed with LNER.’

Tens of thousands of commuters are pouring back into city centres as workers returns to offices and parents to the school run following the summer break.

London Mayor Sadiq Khan said he was ‘delighted’ by the increase in Tube usage, adding: ‘Our city – and our country – depends on London’s economic recovery. I urge returning office workers to make the most of what our city has to offer.’

TfL said the return of people to the network was a trend being seen over the last few weeks, with taps in on the Tube up by 12.5 per cent and bus usage up by 13.7 per cent when compared with last Friday.

A spokesman said that while many children used buses to reach school, fewer used the Tube, suggesting that commuters were returning to the network too.

But nearly twice as many passengers used the London Underground pre-Covid.

Last month, an average of more than 1.8million journeys were being made on the Tube every weekday, compared to 3.9million in July 2019.

Meanwhile one government source told MailOnline they had been shocked to find civil servants reinstating social distancing measures in their department.

The source said: ‘There were officials putting social distancing restrictions back in place. We said, ”what are you doing? We are trying to get more people in, not close off desks.”. We can’t get them to do one day a week, let alone three.’

The uplift in road traffic came after hundreds of thousands of workers were told by top firms that they were expected to be back in the office from yesterday after 18 months of working at home during the pandemic.

Some of the nation’s biggest employers have told staff they are now expected to turn up for work – even if it is just for one day a week. 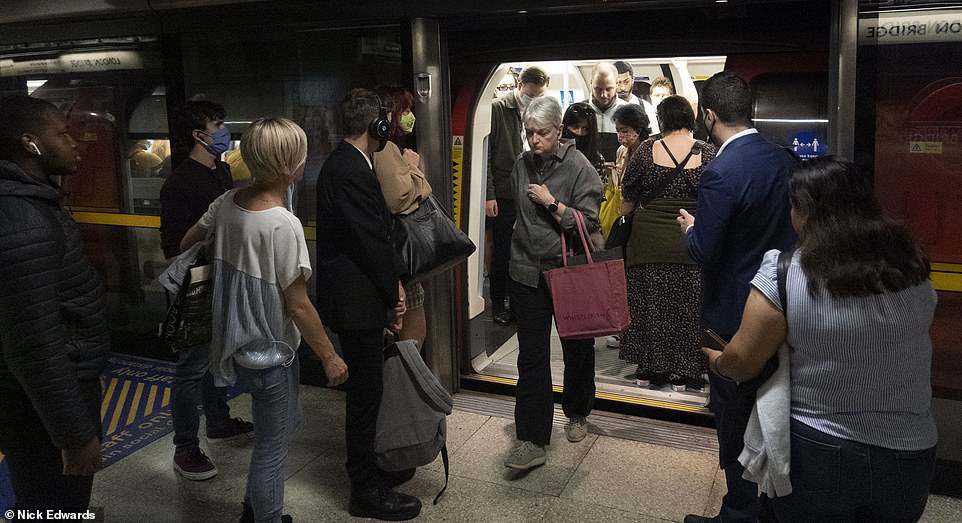 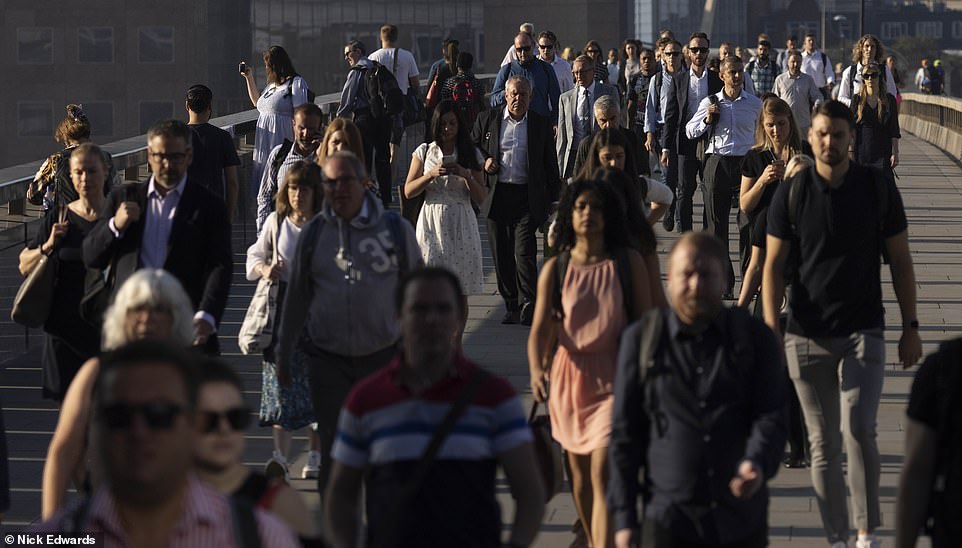 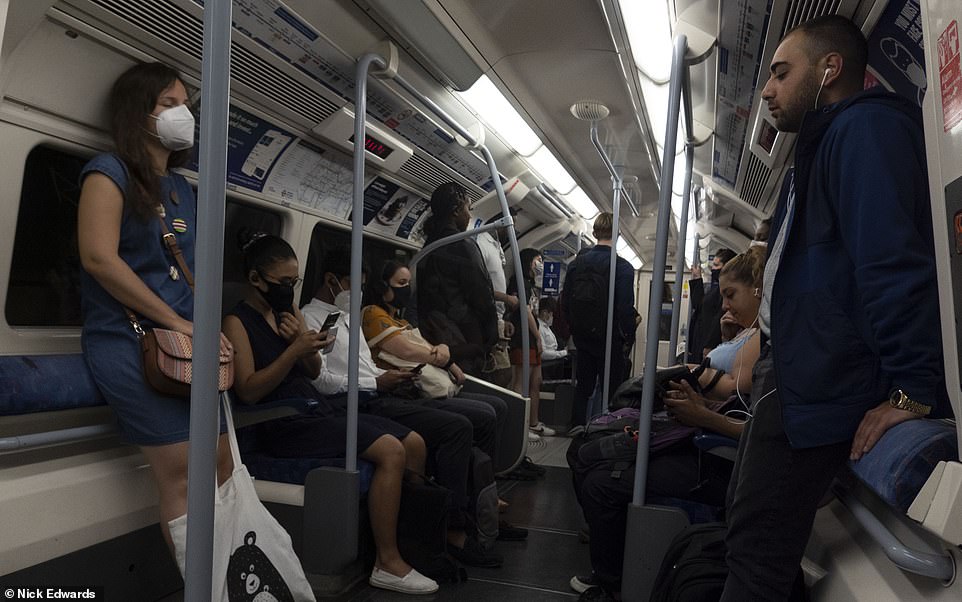 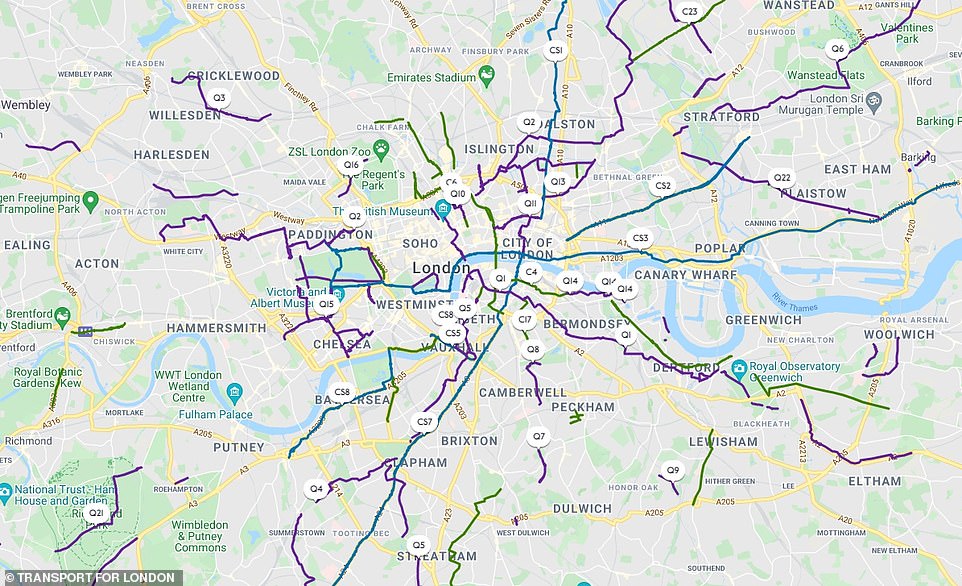 A Daily Mail audit of 18 of the UK’s biggest firms, which together employ more than half a million staff, found that half of their office workers are expected to return from this week.

London to Edinburgh… on the £15 express!

A budget rail service offering low cost tickets from London to Edinburgh for £15 will launch next month.

Called ‘Lumo’, its carriages will be stripped down to a single class, meaning no first-class seats. It will also have no buffet cars, with passengers instead ordering food and drinks via an app and delivered to their seat.

Refreshments will also be available via an on-board trolley. Single fares between London King’s Cross and the Scottish capital will start from £14.90 on and off-peak, with nearly two-thirds of tickets being £30 or less. The cheapest return ticket will be £29.80.

The ultra-low fares have to be booked in advance, but will be available up until a day before travel. By comparison, an off-peak single fare booked ahead on the existing Edinburgh service costs about £70, according to the National Rail Enquiries website.

Lumo is owned by FirstGroup, which currently runs trains on the West Coast Mainline. It wants to cash in on leisure rail travel, which bounced back to pre-pandemic levels much faster than the commuter market.

Sainsbury’s, British Petroleum, Vodafone and Deloitte are among the firms.

Every firm surveyed by the Mail said that hybrid working – a mix of office and home working – was the future.

But there was growing frustration at civil service chiefs not following suit as pictures of Whitehall showed it deserted yesterday.

Official ‘work from home’ Whitehall guidance was removed on July 19. But insiders say Whitehall has only seen a slight increase in staff back at their desks, with the numbers in the office still ‘pretty low’.

Along with civil service chiefs, the Bank of England has again delayed plans to force staff to return to the workplace.

One source suggested ministers were waiting to see what impact the return of children to the classroom this month has on coronavirus case numbers before starting a push.

Private sector businesses believe the end of the school holidays and the fact everyone has been offered two vaccinations gives them a mandate to demand a return to the office.

Former Conservative leader Sir Iain Duncan Smith warned thousands of low-paid staff in the hospitality sector would be left unemployed within weeks if office staff do not return to their desks.

He urged civil servants to ‘set an example’, adding: ‘If we are going to spend our whole lives scared stiff of Covid then this economy will go down the plughole.’

The Centre for Cities think-tank also raised the alarm saying September was a ‘crunch month’ for city centres.

Despite this week’s push for workers to return, many companies will not see all of their staff return until well into the autumn.

NatWest, which has 34,000 office staff, said a ‘very small’ number were currently coming into the office, but that it was pushing for a ‘gradual return’ from September 13.