The chairman of DMGT has condemned the Australian ‘surrender’ to tech giants and says its watering down of laws forcing them to pay for news is ‘bad for democracy’ across the globe.

Lord Rothermere said the laws, which were given final approval by Australian senators today, will allow Facebook and Google to ‘decide what news is read on social media and what, if anything, is paid for it.’

He added that politicians in democracies worldwide must decide if they will let tech giants choose what news the public sees in ‘secret deals with the publishers they favour’ – or act to ensure ‘fair and transparent treatment for all’. 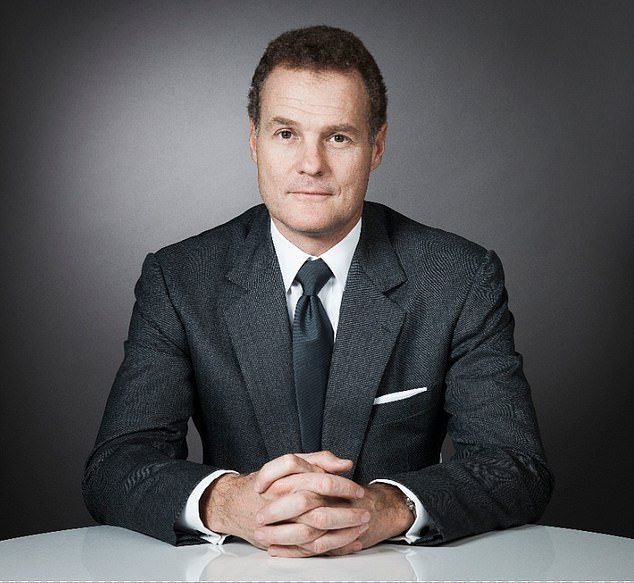 In a letter sent to the Financial Times, he wrote: ‘Yesterday was a bad day for democracy. Politicians should be very worried about events in Australia.

‘Reporting news costs money; but for years Facebook and Google have plundered news content without paying for it, while at the same time extracting ever greater profits from advertising markets they dominate.

‘News publishers and governments have worked together to fight for fair treatment.

‘Here a new digital regulator is being set up; in Australia Parliament has been debating a law to force platforms to pay for content.

‘A nation was held to ransom – and it surrendered.

‘As long as the platforms persuade enough desperate news publishers to sign take-it-or-leave-it deals, there will now be no fair, independent arbitration.

‘In Facebook’s own words “the government has clarified we will retain the ability to decide if news appears on Facebook… to support the publishers we choose.”

‘In other words Facebook has won the battle. It decides what news is read on social media and how much, if anything, it pays for it.

‘Meanwhile Google has signed a global deal with one of its most vociferous critics. News Corp, owner of The Times, has announced that it has won “significant payments” and “the sharing of ad revenue via Google’s ad technology services.”

‘What does it give in return? Will it continue to fight for fair terms of business for all publishers, or are two of the world’s most ruthless companies now locked in an unholy alliance, giving rise to unfair competition unless its terms are made public?

‘Politicians everywhere have watched events in Australia with increasing alarm. Now they must ask themselves, who makes the rules? 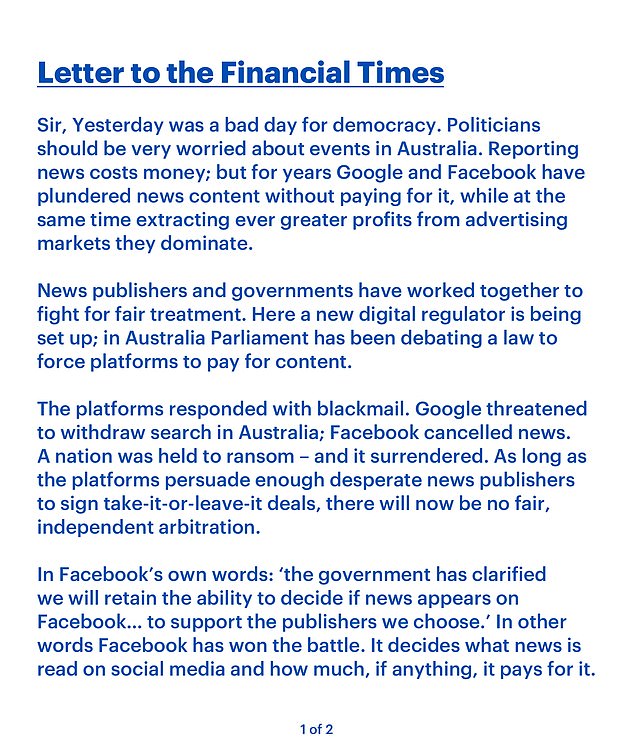 In the letter, which was sent to the Financial Times, Lord Rothermere argues the new laws will be ‘bad for democracy’ by allowing tech companies to choose what news people see 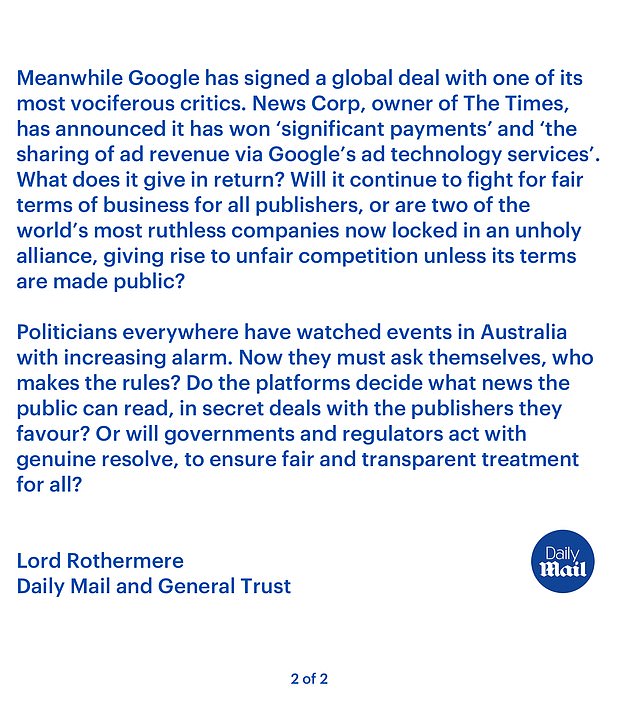 ‘Do the platforms decide what news the public can read, in secret deals with the publishers they favour? Or will governments and regulators act with genuine resolve, to ensure fair and transparent treatment for all?’

Australian ministers have painted the world-first laws as a victory over tech giants, saying Facebook and Google are now striking deals worth millions of dollars with publishers while Facebook’s news blockade of the country will come to an end.

But critics say the government has capitulated – pulling the teeth out of the legislation and handing tech firms and unfair advantage in negotiations, despite promises to ‘level the playing field’.

The move also sets an international precedent that countries drafting their own laws – such as the UK, US and EU member states – will be watching with close interest.

Australia’s new law was designed to tackle the huge power imbalance between news publishers and the giant tech companies which dominate global markets and soak up the lion’s share of advertising revenue by forcing Google and Facebook to pay for the news content they use and reveal some of their closely-guarded algorithms and data.

For every $100 spent by Australian advertisers online today, $49 goes to Google and $24 to Facebook, according to the country’s competition watchdog.

Google and Facebook had led opposition to the changes, fearing it would create international precedent that would threaten their business models.

Initially, Google threatened to pull its search engine from Australia altogether – but backed down last week and began doing deals with media outlets.

The ban even brought down the site’s own page for a short time.

Facebook agreed to restore news and negotiate deals similar to the ones Google has struck, but will do so with increased bargaining power after changes were agreed.

Google has been told about the changes and has described them as ‘sensible.’

Facebook and Google still face the prospect of having to agree deals with media around the world, as the UK, European Union, Canada and other jurisdictions move to regulate the sector.

Since their emergence around the turn of the century, Google and Facebook have been largely unregulated and have grown into two of the world’s largest and most profitable companies.

But a string of scandals about misinformation, privacy violations, data harvesting and their virtual monopoly on online advertising has triggered the attention of watchdogs.

Critics of the Australian law have said it is punishing successful companies and amounts to a money grab by struggling but politically connected traditional media.

They also lament that there is no requirement in the law that money gained by the media companies from Facebook and Google be spent on expanding public interest journalism rather than just boost profits.

Thousands of journalism jobs and scores of news outlets have been lost in Australia alone over the past decade as the sector watched advertising revenue flow to the digital players.