Lufthansa cancels up to 800 flights TOMORROW due to pilots’ strike: German airline blames ‘extraordinary circumstances’ as it axes 7,000 trips – including dozens to UK at last minute

German airline Lufthansa has cancelled around 800 flights tomorrow – including dozens serving the UK – due to a pilots’ strike.

Around 7,000 passengers booked on the carrier’s UK flights will be disrupted.

All 34 of Lufthansa’s services connecting Heathrow with Frankfurt and Munich are to be grounded, in addition to 11 flights between Manchester and Germany.

Affected passengers are entitled to be flown to their final destination as soon as possible.

They may also be entitled to compensation, as consumer groups do not believe cancellations due to strikes by airline employees fall under the ‘extraordinary circumstances’ exemption. 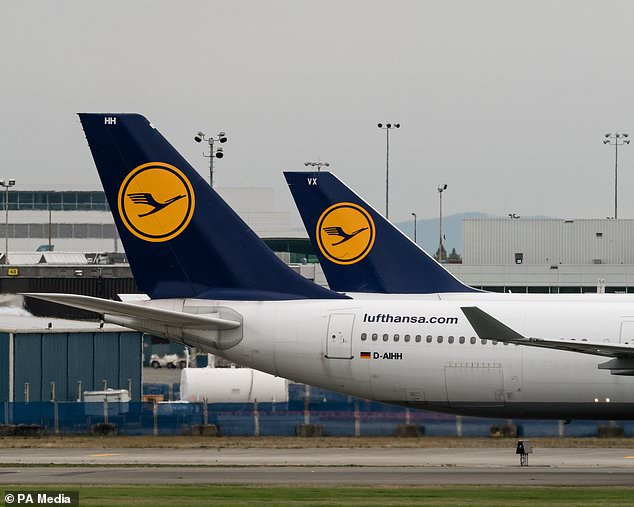 Vereinigung Cockpit (VC), a trade union representing Lufthansa’s pilots, announced the walkout on Thursday in a row over pay.

VC is demanding a 5.5% pay rise this year for its more than 5,000 pilots and automatic inflation compensation thereafter.

‘We hope to get back to negotiations as soon as possible,’ a Lufthansa spokesperson said today. ‘However, we cannot bear the cost increases associated with VC’s demands either,’ he added.

VC accused bosses of failing to improve on their previous proposal.

Matthias Baier, a spokesman for the union, said: ‘Aware of our responsibility for companies and guests, we wanted to leave no stone unturned and offered another negotiation date despite an inadequate offer and failed negotiations.

‘We did not receive a sufficient offer today either. This is sobering and a missed opportunity. The negotiations have failed.

‘The only thing left for us to do is to reinforce our demands with a labour dispute.’

Lufthansa said it has offered to raise pilots’ monthly base salaries by 900 euros (£777), and claimed the union’s demands would ‘would increase payroll costs by more than 40%’.

‘The management has made a very good and socially balanced offer – despite the continuing burdens of the Covid crisis and uncertain prospects for the global economy.

‘This escalation comes at the expense of many thousands of customers.’

The walkout follows a difficult summer for UK passengers with thousands of flights cancelled by airlines including British Airways, Easyjet and TUI, while lengthy queues at airports and problems with missing luggage have been widely reported.

British Airways was revealed to cancel the most flights out of all UK carriers, cutting nearly 30,000 flights from their summer schedule.

At the height of the chaos, British Airways cancelled 3.5 per cent of their schedule compared to budget airline Ryanair which axed a mere 0.3 per cent, according to data obtained by Sky News.

The airline had suffered from staff shortages and absences after cutting 10,000 jobs in 2020.

A shortage of airport staff has also been cited by as recurring issue across UK airports, with the Recruitment and Employment Confederation (REC) citing ‘chaos at airports’ as a consequence.