BRITAIN is ready to make life a misery for French fishermen over Emmanuel Macron's "unacceptable" threats to start a trade war.

Environment secretary George Eustice said the UK is prepared to hit back by ordering more spot checks and red tape on trawlers in our waters.

French boats could even be banned entirely from landing catches at British ports if the French President doesn't back down.

In a major escalation Mr Eustice slammed his "totally disproportionate" threats over fishing licences and vowed: "Two can play at that game."

The row over fishing licences has erupted because Paris is angry at a small number of its boats being turned down for licences.

It is threatening to block all UK trawlers from its ports and deliberately snarl up cross-Channel trade in goods unless more are granted.

French ministers have also warned they could hike the price of electricity in Jersey, which is supplied by an undersea cable.

A tit-for-tat war could play out badly for France with its boats far more reliant on access to our waters than vice-versa.

Fewer than 5% of British fisheries products exports to the continent are landed at French ports.

Paris sparked uproar by seizing a Scottish scallop dredger and accusing it of operating in EU waters without a licence.

The boat was escorted by armed police to Le Havre and the skipper has now been ordered to return to court there next summer. 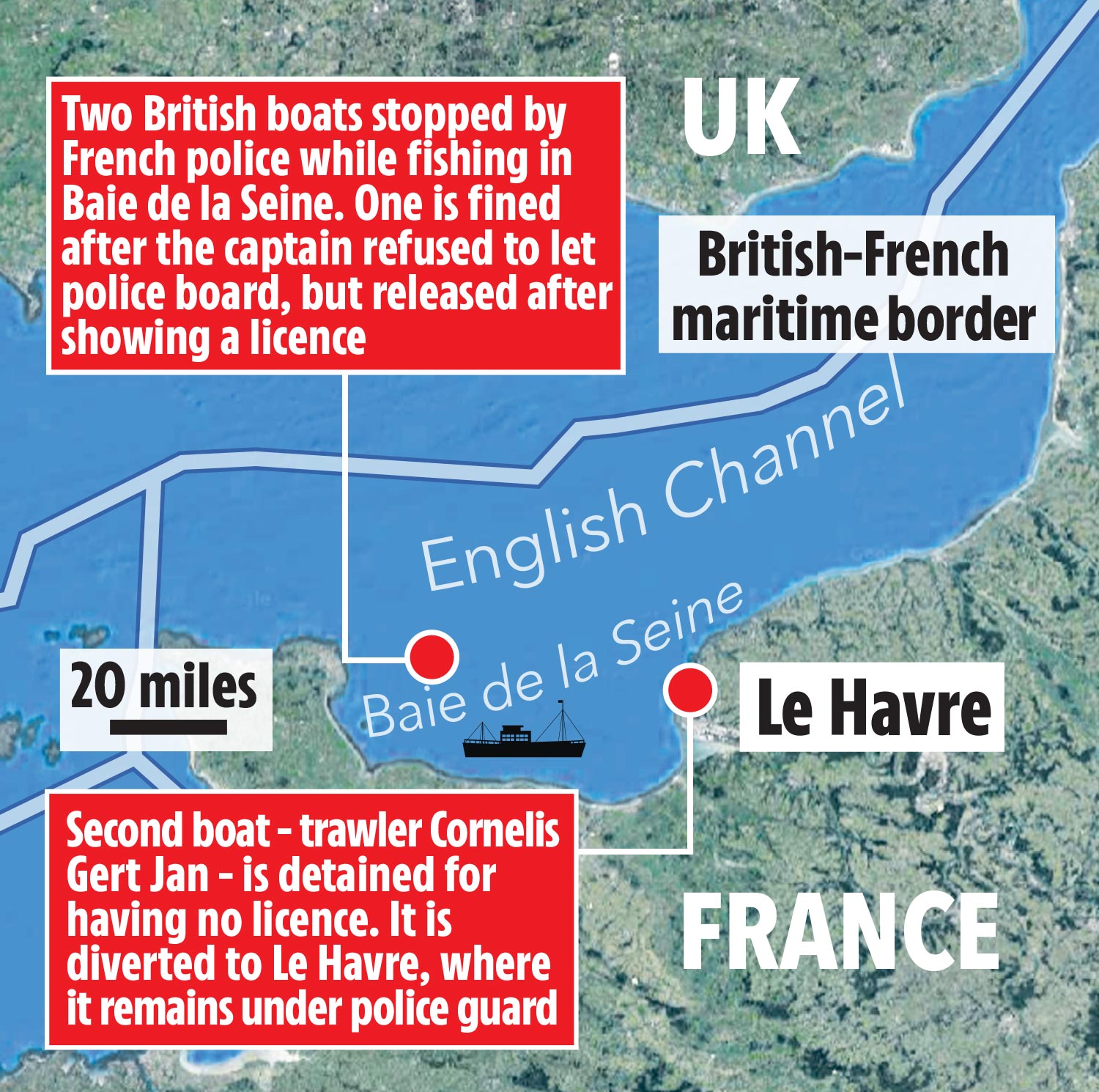 Foreign secretary Liz Truss has summoned the French ambassador as the escalating row threatens to overshadow the G20 and Cop 26.

Mr Eustice slammed the "inflammatory language" used by Paris and said Britain could "increase enforcement" on visiting trawlers in response.

He fumed: "The comments that have been made by France on this are completely disproportionate, they're unacceptable.

"The things they are suggesting doing are a clear breach not only of the trade agreement that we've got with them but also of EU law.

"We don't really think it's justified at all. We want to defuse this issue but the truth is we've not done anything wrong.

Mr Eustice said the UK has approved 98% of licence applications from EU boats including 750 for French vessels.

He dismissed claims from Paris that half of their country's vessels have been turned away as "simply not true".

And he added: "We've been entirely reasonable throughout on this. We've issued licences as soon as we've been able to."

The Navy is on standby should the row escalate further with two armed patrol boats at a high state of readiness.

And the French are doubling down on their threats to start a trade war and say revenge measures are set to come into force on Tuesday.

In a further escalation of tensions he said Emmanuel Macron is lashing out because No 10 "only understands the language of force".

France could "revisit" and cut off cooperation across a number areas in a bid to blackmail the PM, he warned.

He fumed: “We have to defend fisheries. There is no reason we should sacrifice it. So we take these measures – temporary, reversible.

WHY are the French angry?

AROUND 100 small French boats want to fish in the UK and Jersey’s rich coastal waters.France is furious that skippers who cannot prove a history of operating in the zone six to 12 miles from our shoreline have been refused licences since Brexit.

WHAT are they threatening?

PARIS has said it may disrupt Channel trade at Dover and at sea as well as hike energy supplies for Jersey, which is supplied by an underwater cable from France.

CRISIS talks between Britain, France and the EU Commission over a solution will continue with fresh urgency today. But the Prime Minister is under pressure to send in the Navy.

Maritime minister Annick Girardin defended her country's reaction and insisted it was "not disproportionate".

She said: "This isn't a war, but it's a fight. French fishermen have rights, a deal was signed and we must implement this deal."

But French PM Jean Castex struck a softer tone, saying he was "open to discussions morning, noon and evening" on finding a fix.

Paris has been backed into a corner after failing to secure support from the rest of the EU for its fishing war against Britain.

EU insiders are privately exasperated by Mr Macron's actions and admit the UK has done little if anything wrong.

Diplomats point to the upcoming French election as his main motivation for picking a fight.

The EU Commission, which has been caught in the middle and is trying to broker a ceasefire, refused to take France's side.

A spokesman said: Vessels who were fishing in these waters should be allowed to continue. All French vessels entitled to a licence should receive one.

“Fishing licence applications are a top priority and we are working hard to support this process.

"We will continue discussions with the UK and France in the coming days to resolve this issue as soon as possible."