A man described by U.S. authorities as the world’s most prolific purveyor of child pornography at the time of his arrest in Ireland was sentenced  Wednesday to 27 years in federal prison.

Eric Eoin Marques, 36, created and operated computer servers on the dark web that enabled users to anonymously access millions of illicit images and videos, many depicting the rape and torture of infants and toddlers. Law enforcement had never seen many of those images before finding them on Marques’ servers, according to prosecutors.

The judge agreed to recommend that the federal Bureau of Prisons give Marques credit for eight years he has served in custody both in Ireland and the U.S. since his 2013 arrest. The judge also ordered him to pay restitution of $87,000 to victims of the child pornography that he helped distribute.

The original version of the plea agreement between Marques and prosecutors called for a prison sentence of 15 to 21 years.

Chuang rejected that deal during a hearing in May, calling it “too flawed” and saying he was inclined to give Marques a longer sentence than 15 to 21 years.

The revised agreement recommended a prison sentence between 21 and 27 years, but Chuang wasn’t bound by those terms.

Prosecutors recommended a 27-year sentence followed by lifetime supervision after his release, a requirement that Chuang also imposed.

“They all got together and they sexually exploited children,” he said. “They reveled in that sexual exploitation.”

Defense attorneys requested a 21-year sentence for Marques, a dual citizen of the U.S. and Ireland. Marques can return to Ireland after he completes his prison sentence.

“There is no one in this courtroom who is not repulsed by what happened in this case,” said assistant federal public defender Brendan Hurson, one of Marques’ lawyers. “He will not do this again, and he is remorseful for what he has done.”

The original plea deal wouldn’t have given Marques credit for the time he spent in custody while fighting extradition after his 2013 arrest in Dublin. But Chuang criticized that provision. The judge said in May that he can’t tell the Federal Bureau of Prisons to refrain from counting those years when Marques likely was entitled to get credit for that time. 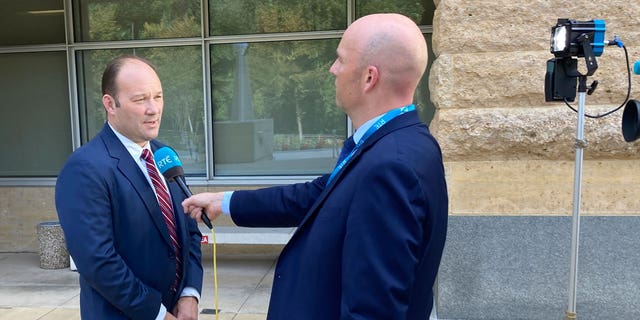 A reporter interviews acting U.S. Attorney Jonathan Lenzner outside the federal courthouse in Greenbelt, Md., on Wednesday, Sept. 15, 2021, after a judge sentenced Eric Eoin Marques to 27 years in prison. U.S. authorities have said Marques, 36, was the world’s most prolific purveyor of child pornography when he was arrested in Ireland in 2013. (AP Photo/Michael Kunzelman)
(AP Photo/Michael Kunzelman)

Marques pleaded guilty in February 2020 to creating and operating a web-hosting service called “Freedom Hosting” on the darknet between 2008 and 2013. The darknet is part of the internet but hosted within an encrypted network. It is accessible only through anonymity-providing tools.

Investigators found what appeared to be more than 8.5 million images and videos of child pornography on the Freedom Hosting server, according to a court filing that accompanied Marques’ guilty plea.

Marques was living in Ireland at the time of the offenses. He was extradited to Maryland in March 2019. He pleaded guilty to conspiracy to advertise child pornography.

In an April court filing, a prosecutor said a government witness was prepared to testify that investigators had identified Marques as the largest purveyor of child pornography in the world and that he had made approximately $3.6 million in U.S. currency from his servers.

Marques’ lawyers say he made money from his legitimate web-hosting services, not Freedom Hosting.

“This is the first case that I’m aware of where we went to the seeds of the trade, the main engine driving so much of the illegal child pornography trade globally,” he said.

Chuang told Marques that he hopes he reads the written statements submitted by his victims.

“It is heartbreaking to see what has happened to these individuals,” the judge said.