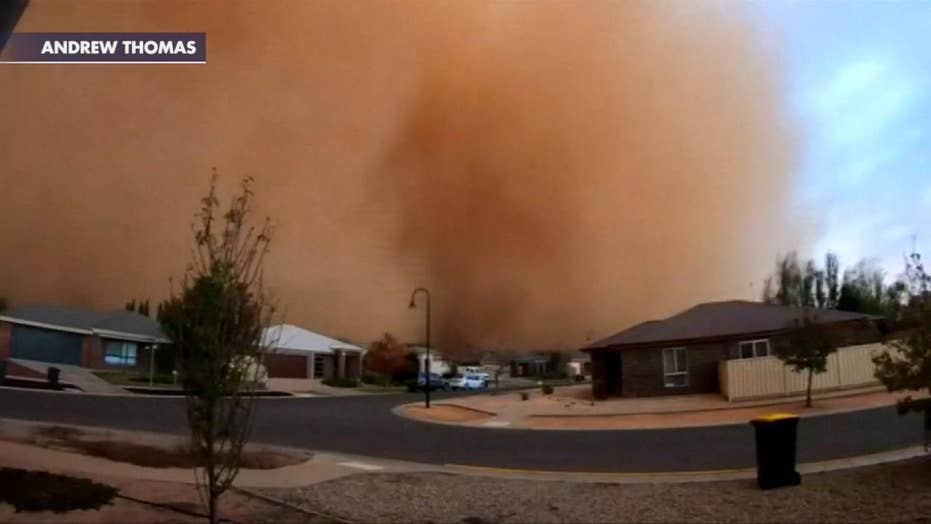 Dust storm rolls in over Australian town, plunging it into darkness

Some called it a "wall of dust."

A massive dust storm turned day to night in a matter of minutes as it swept through a northwestern Australian town on Tuesday.

The storm engulfed the landscape of Mildura and the local airport with a large brown cloud.

Meteorologists said the storm, which is unusual at this time of year, brought wind gusts that reached 35 mph. It was triggered by a massive cold front sweeping through the region.

“As I was driving through Red Cliffs I could see the sky changing a different color and it was very windy,” Lisa Guarnaccia told Australia’s ABC. “I pulled up on the side of the road and into the service road on the other side where those grape vines were and I thought ‘Wow, this is amazing.'"

“It was very apocalyptic and very scary – the darkness and the wind,” Guarnaccia added.

Dramatic images shared on social media showed how the storm rolled in unexpectedly.

Tanvi Mor, who as at Mildura Airport when the storm hit around 5 p.m. local time, told The Guardian that it seemed like the storm was “swallowing” the region. He said it was probably the worst dust storm in the region in 40 years.

Shaun Blytham, a dealership salesman in Mildura, told the Guardian that it first looked like a thunderstorm rolling in, and then it went pitch black.

Meteorologists said such dust storms are rare this time of the year.

“Dust storms are a lot more common during our summer months but of course it’s been very dry,” forecaster Dean Stewart told ABC. “So there’s still some very dry land, and with the gusty winds it’s picked up the dust on the gust front.”