Port Phillip councillors have accused the Andrews government of allowing the development of Fishermans Bend to languish through inaction while having “grand conversations” about infrastructure that has not materialised. 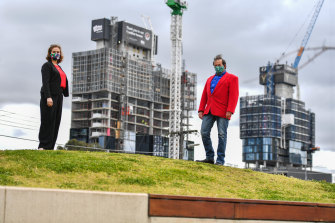 The government forecasts Fisherman's Bend will house 80,000 people by 2050, with plans to build parks, schools, roads, transport, facilities and services.

A spokesman for the government said: "The government is committed to a collaborative approach to planning for Fishermans Bend and the City of Port Phillip and City of Melbourne are key partners."

However, a report by Port Phillip Council officers said the precinct's success rested on the early delivery of a tram connection into the residential precincts.

“Public transport, and getting that tram into both sides of Fisherman's Bend, is the single biggest catalytic project that will influence the roll-out like nothing else will,” mayor Bernadene Voss said at a council meeting after the report was tabled last week.

Development in Montague, which is connected to the 109 tram route, has advanced but at Wirraway and Sandridge it has stagnated.

The Victorian government committed $4.5 million in the 2019-20 budget for early planning and to develop a preliminary business case for transport connections between Fishermans Bend and the CBD, including trams. 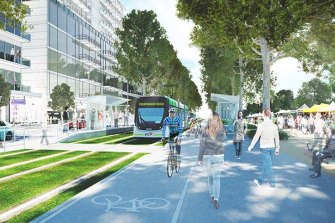 An artist’s impression of the finished Fishermans Bend project.

Greens councillor Ogy Simic said he was leaving the council pessimistic about the project’s prospects and that a "huge funding gap" needed to be resolved.

Cr Gross labelled the financial situation "catastrophic", and said the council was providing infrastructure with no certainty on where the money was coming from.

He made little provision for infrastructure funding, public transport, parks or schools, a regime overturned by current Planning Minister Richard Wynne in 2015. However, uncertainty saw development grind to a halt.

“It's been a game of catch up right from the beginning,” he said.