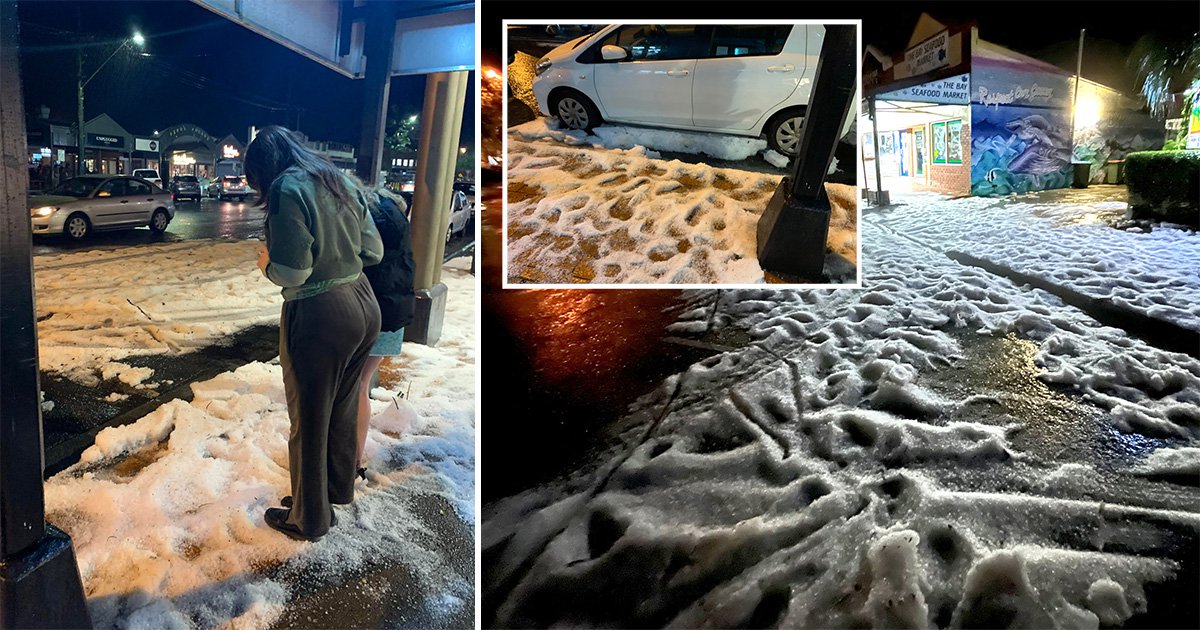 While people in the UK are cowering under any shade they can find, people in Australia are apparently making ‘snow’ angels.

Byron Bay in New South Wales was left white after an intense storm hit the town on Tuesday.

A thunderstorm around 5pm turned into severe hail that reportedly left up to 10cm of ice in some areas.

Some were reportedly seen building snowmen and making snow angels, as the Bureau of Meteorology acknowledged the storm was an ‘uncommon’ event.

But some locals said the hail only stayed on the ground for about half an hour before it melted.

Geoff Bensley told Daily Mail Australia he’d lived in the area for nearly 60 years and had only seen hail that severe once before.

‘It was amazing, the last time we got hail like that was at Splendour in the Grass in 2012,’ he said.

Tour guide Delta Kay, who was working with a group when the storm hit, said 15 people ended up ‘hiding’ under a BBQ shelter during the ‘heavy and loud’ hail.

Meanwhile, one woman revealed on Facebook that her hotel became flooded just as her dinner arrived at a restaurant.

‘We had no idea it was a massive hail storm, until we walked back home… never seen hail like this!’ she said.

‘Looks like it’s been snowing. Someone even built a snowman!’

Forecaster Jonathan How said a trough off the Queensland coast had brought some tropical moisture south.

This generated a thunderstorm when it met with very cold air mass moving up from the south, ABC News reports.

Many Aussies across the country – except the west – have been told to brace for icy conditions for the rest of the week.

It comes after the United Nations warned in April that the world is on a ‘fast track’ to climate disaster.

A heat dome — a mass of stagnant hot air — currently burning across Europe is quickly heading towards the UK.

Met Office forecasters have issued an extreme heat warning, with some models suggesting Brits face temperatures of around 40°C.