Victoria is set to swelter through its hottest day in almost a year as temperatures across the state nudge 40 degrees and severe fire danger ratings spark warnings for the north-west.

The temperature at the Olympic Park weather station had hit 29.4 degrees by 9am on Monday. Melburnians won't see any respite from the heat until the middle of the night. 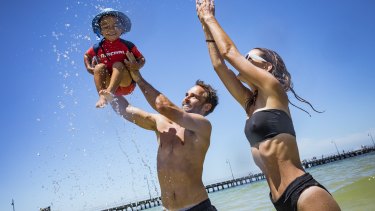 With Melbourne temperatures set to rise sharply on Monday, Carlton North couple Matt and Mattia Ferne cooled off at Albert Park on Sunday with their two-year-old son Julius.Credit:Chris Hopkins

The Country Fire Authority (CFA) has declared a total fire ban for the Mallee, Wimmera and Northern Country regions in Victoria's far north-east and issued a 'severe' fire danger rating.

Melbourne is expected to reach 38 degrees on Monday. Mildura and Swan Hill have a forecast top of 40.

The South West, North Central, and Central region, including Melbourne, have a 'very high' fire danger risk on Monday.

Bureau of Meteorology duty forecaster Christie Johnson said while the heat may feel like an outlier after last week's rain, it was business as usual for a Victorian summer.

"Most of the state will be in the high 30s, so it will be pretty hot," she said.

"We've got freshening northerly winds bringing hot winds from the interior of the continent. It's pretty common for summer, but it doesn't feel that common, because we've had such a mild start to summer."

Melbourne's temperature is expected to peak in the late afternoon.

But relief from the heat won't be immediate. Ms Johnson said a gentle cool change won't hit the city until close to midnight, before another colder sweep of wind arrives between 3am to 5am.

"The cool change will get into the state's west in the late afternoon or early evening, and it will move across and reach Melbourne quite late," she said.

"It's a bit of a double change in a sense, there's an initial change which will bring milder air, but the coolest air is delayed a few hours behind and will arrive in the early hours of Tuesday.

"It will be a cooler night that it was (on Monday), but it might be one of those situations where you go to bed and it's still quite warm, but throughout the night, you'll suddenly need to pull doona onto the bed again."

The state's border communities will miss the brunt of the cooler weather. there will be a spike in fire danger again on Wednesday with temperatures above 40, Ms Johnson said.

A total fire ban is called "on days when fires are likely to spread rapidly and could be difficult to control", according to the CFA.

At the end of each day, we’ll send you the most important breaking news headlines, evening entertainment ideas and a long read to enjoy.  Sign up here.