Mick Gatto’s nephew faced court on Thursday, accused of forcing a man into a car, holding him against his will and threatening him in a dispute over the purchase of luxury handbags.

Police allege Daniel Gatto, a nephew of the high-profile underworld figure, kneed a man to the head, then he and two associates bundled the man into their car and drove him for about an hour on Monday night after they met outside a McDonald’s outlet in Templestowe. 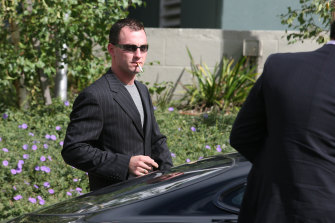 As they drove, Daniel Gatto demanded the man return $2000 to him after buying a Louis Vuitton handbag on sales website Gumtree, Melbourne Magistrates Court heard on Thursday.

Detective Senior Constable Sophie Templeton told the court Mr Gatto had bought two handbags from the man on Gumtree but later believed they were fake. Police ultimately seized the bags during a search of Mr Gatto’s home and will determine if they are fake or genuine.

Mr Gatto and his companions drove the man to ATMs so he could withdraw money, and warned him not to contact police before they let him go, Senior Constable Templeton said.

Mr Gatto allegedly told him: “If you go to the police bad things will happen to your family.”

However Mr Gatto, 38, and Joseph Mandaliti, 39, were arrested in the following days and charged with kidnap, assault, theft and other offences. Their alleged co-offender is still at large.

Mr Gatto and Mr Mandaliti were on Thursday granted bail despite police concerns they would try to contact and intimidate the alleged victim.

Senior Constable Templeton said that before the man was released, the group had photographed cards in the man’s wallet and contact details in his phone.

“We have great concerns that the victim may be intimidated by Mr Gatto and his associates,” the detective said.

Mr Gatto and Mr Mandaliti’s lawyers argued the accused pair faced spending years in custody awaiting trial and that any risks they posed could be addressed through bail conditions.

Mr Gatto had strong ties to the community through his family and business, lawyer Martin Amad argued, and offered a $490,000 surety through two properties.

Magistrate John Bentley granted both men bail on conditions they abide by a nightly curfew, not associate with each other and report regularly to police. Mr Mandaliti was granted bail on a $370,000 surety.

The accused men are due to face court on September 2.

The Age does not suggest Mick Gatto was involved in the incident.