The members of a U.S. Marshals Service task force who fatally shot Winston Smith Jr., a Black man in Minneapolis, Minnesota, last summer will not face criminal charges, according to a prosecutor on Monday.

Crow Wing County Attorney Don Ryan said the task force members were justified in using deadly force when they shot Smith on June 3 because Smith drew a handgun on them and fired.

“Though I am unable to determine who fired first, it is irrelevant in this case,” Ryan wrote in a letter to Hennepin County Attorney Mike Freeman dated Wednesday, according to the Star Tribune. “Once an individual initiates a deadly force confrontation, a law enforcement officer does not have to wait to be shot/shot at before reacting.” 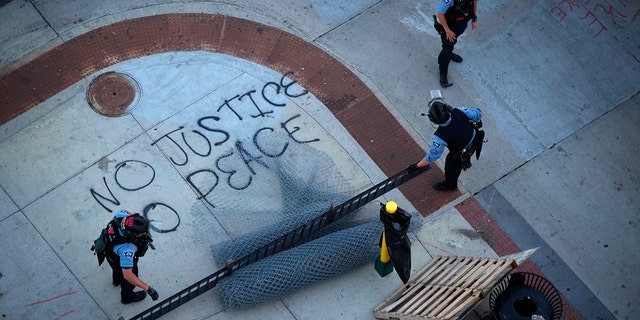 Minneapolis Police descend on the block long stretch of Lake St. just before sunset to dismantle the barricades erected by protesters in Minneapolis on June 15, 2021. Members of a U.S. Marshals Service task force will not be charged in the fatal shooting of Winston Smith Jr., a Black man who was killed while authorities were trying to arrest him as he sat in an SUV at a Minneapolis parking ramp. (Jeff Wheeler/Star Tribune via AP File)

Smith, 32, of St. Paul, was in a parked SUV when he was shot by two task force members as they tried to detain him for allegedly being a felon in possession of a firearm. At the time, the U.S. Marshals Service said he didn’t comply and “produced a handgun resulting in task force members firing.”

Ryan said task force members were identifiable as law enforcement when they told Smith he was under arrest and ordered him out of the vehicle. They also used sirens as they boxed in the SUV, wore clearly marked tactical vests, and gave numerous orders for Smith to keep his hands visible.

Ryan said Smith was doing something with his phone and didn’t comply for “several minutes.” Smith later dropped his phone and leaned into the backseat — before a task force member yelled “don’t do it,” and “gun, gun, gun.”

The two task force members fired their weapons at Smith and the Hennepin County Medical Examiner’s Office said he was shot multiple times.

Ryan said the actions of the two task force members were “reasonable and justified.”

“Their conduct was clearly in response to an apparent threat of death or great bodily harm.” Ryan wrote, according to the Star Tribune.

Smith’s death also sparked protests and authorities said at the time there was no video of the shooting.