Modena: Six months ago Modena was a ghost town; an eerie early warning about the coronavirus pandemic's brutal capacity to devastate economies and unleash a tidal wave of death.

COVID-19 hit northern Italy with such force that Modena and the affluent province of Reggio Emilia have been challenged much harder than most. In the end, nearly 5000 people died here.

The crisis also had the makings of an existential threat to Italy's luxury car makers – most of which are headquartered in the north and rely on a healthy workforce, humming global economy and uninterrupted supply chains to do business. Italy's industrial powerhouse was effectively switched off overnight in early March when Prime Minister Giuseppe Conte imposed a regional lockdown and then a nationwide shutdown just a few days later. 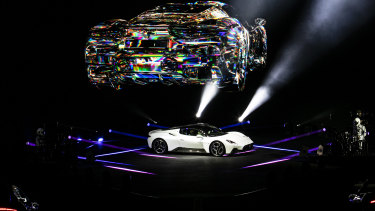 The launch of the new Maserati MC20.

On a racing track just outside the city, Maserati – which builds cars in Modena and was founded in nearby Bologna 105 years ago – also revealed its first sports car in 15 years, the much-hyped MC20.

Some 400 international journalists sipped Champagne and sat in a socially distanced grandstand for the lavish event which featured production values to rival a Beyonce concert. The gathering symbolised how Modena and its manufacturers have decided to live with the virus and work around it. 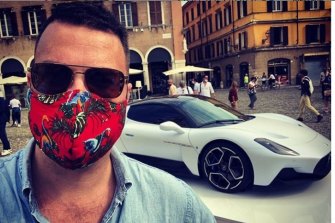 "This new car is not just a terrific thing for Maserati and our change of direction, but also for a region which has been ravaged by COVID-19," said Glen Sealey, the chief executive officer of Masterati's operations in Australia and New Zealand.

"It marks a period of recovery and it really shows the resilience of our brothers and sisters in Italy given what they have been able to get through this year."

There were initially deep fears that factories owned by Maserati, Alfa Romeo, Ferrari and other brands might not reopen open for at least six months, but after early stumbles the Italian government has managed to control what was at one point the world's worst outbreak.

Production and design resumed in the European spring, including at Maserati where more than two years of work had gone into the MC20 before the abrupt halt postponed a planned reveal in May. 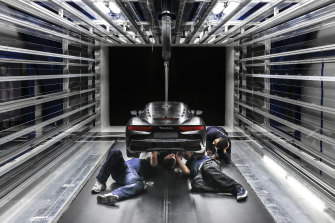 Engineers work on a scaled version of the Maserati MC20 during wind tunnel testing.

In a break from recent history, the MC20's new engine – a 630 horsepower V6 which delivers a zero to 100 kilometre-an-hour speed within 2.9 seconds – is made entirely in Modena at its rebuilt Viale Ciro Menotti plant. The car will be assembled in the same production line space once used for the GranTurismo and GranCabrio models.

The company has a lot riding on the MC20. It sold 26,000 vehicles worldwide in 2019 – down from 36,500 in 2018 and about 49,000 the year before that. Maserati plans to roll out about a dozen other new models over the next few years to breathe new life into the brand. It will embrace electrification in a pitch to younger potential buyers, and a vintage Maserati Quattroporte IV will even feature in the soon-to-be released Bond film No Time To Die.

"When you go into any downturn, people turn to value and value isn't always what is the cheapest," he said. "It's also about the brand and how you’ve treated the brand beforehand pays off during the tough times."

Some 575,906 cars from all sectors of the market were sold in Australia as of August 31 – a 20.4 per cent fall on the same period in 2019. Sealey said Maserati's sales in Australia were down only 8.7 per cent so far, although Melbourne's lockdown is starting to take a toll on all dealers.

Bevan Shields travelled to Italy as a guest of Maserati.