Moment mother-of-two, 51, suffered horrific Sharm El Sheikh water slide accident that ripped off her bikini and crushed her bones to leave her nearly paralysed for life in TUI holiday horror

A mother-of-two says her ‘life has changed forever’ after she sustained crushed vertebrae on a wave machine at a TUI waterpark.

Tracy Turner was stripped naked and nearly paralysed on the machine at the waterpark attached to the 4-star Coral Sea Aqua Club Hotel in Sharm El Sheikh, Egypt.

Camera footage caught on the moment the water pressure was so strong it ripped off her bikini top and bottoms while a lifeguard stood by laughing.

The 51-year-old, from Pontefract in West Yorkshire, claims doctors later told her she was ‘millimetres’ from ending up permanently disabled.

Ms Turner now endures regular painful injections in her spine and takes a cocktail of painkillers some four years on from the incident in June 2015 and has launched legal action against TUI after the company ‘refused to apologise’.

She is now warning others to be aware of the dangers at waterparks. 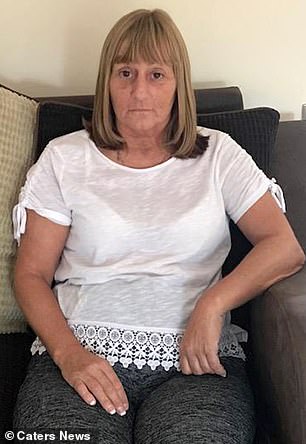 She said: ‘I was lucky not to be in a wheelchair but the next person might not be. My life has changed forever and has been ruined from a simple water ride.

‘I never knew they were that dangerous. I was a real outdoors person and had a great social life – now I can’t do anywhere near as much as I used to. I have also piled on the weight as I can’t go to the gym and am depressed.

‘The worst thing is that the tour operator TUI don’t care. They are happy to take your money but if anything happens then they are not bothered. They wash their hands of you. They never even bothered to see me after I was injured.

‘People going on holiday with [TUI] need to know the risks of using water rides and getting injured.

‘The pain is constant and I have been told there is no end in sight. I am not the same outgoing person I was before that holiday. ‘

The accident happened as Ms Turner braved brave the ‘Flowrider’ body board slide just hours into her two-week holiday with one of her twin sons, Joshua, 23, her sister and her niece.

She added: ‘There were no safety instructions. I just got told to kneel on the body board. I followed all his instructions but going on that ride was the worst mistake of my life.

‘The water pressure was unbelievable. It threw me around like a rag doll in a tumble dryer. I had no control.

‘It slammed me forward and took my top off and I was covering myself up for a second. Then I didn’t know what was happening. My bottoms came down and I didn’t stand a chance really – I was at the mercy of the water all the time.’ 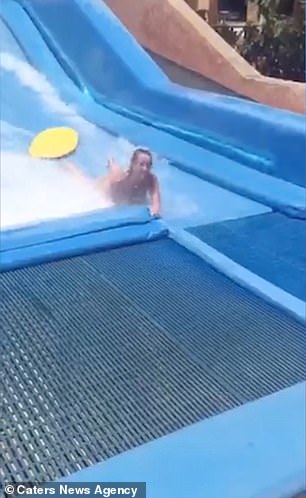 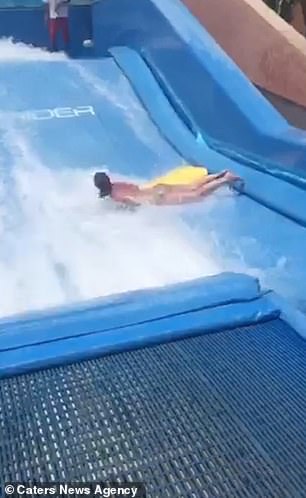 A holidaymaker came over and hid her modesty with a towel and she had to be helped off the ride by a lifeguard.

She added: ‘[The lifeguard] never stopped laughing and didn’t try to help or anything. I had a massive pain in my neck and back that I had never had before. It was so bad that I nearly fainted.’

Her sister had hospital grade painkillers with her which Ms Turner was able to take.

She claims her son reported the incident to the lifeguard, who agreed to note it in an accident book but Ms Turner alleges she was not given a copy and is yet to see a report.

When she arrived home doctors found she had fractures to her mid thoracic spine – a major section of the spinal column.

She added: ‘I couldn’t believe what I was hearing. He said I was very, very lucky not to be paralysed.

‘The pain is like a constant really bad tooth ache that never goes away. It really hurts and I don’t know if or when it will get better. It is constant pain in my neck and my back between my shoulder blades.

‘My doctor even told me it is likely that the injury could also cause arthritis in the future and I now have a new nagging pain at the bottom of my back.’

Ms Turner needs help doing everyday tasks and has gone from a size 8 to size 14 because she is no longer able to visit the gym. 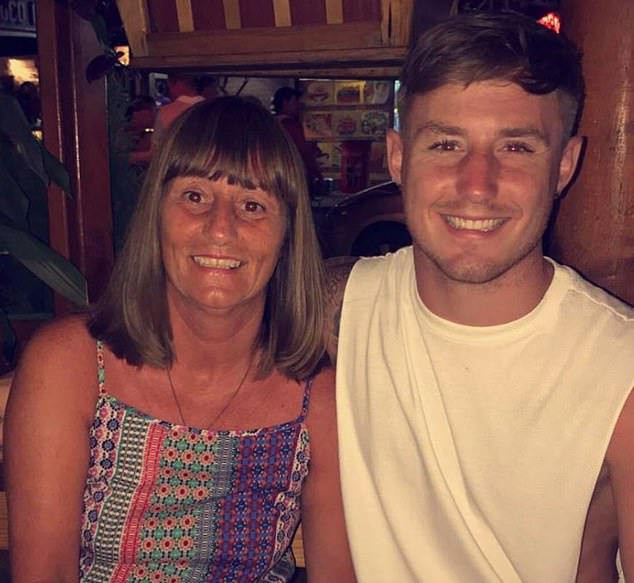 Ms Turner was on the two-week holiday with one of her twin sons, Joshua, 23, (pictured) her sister and her niece

She claims the pain and depression was so bad that she didn’t even attend her own 50th birthday night out which had been arranged by a friend.

She said: ‘This was a very nasty injury which could easily have resulted in Tracy being paralysed. She has had a very rough time since the accident. This incident demonstrates how dangerous certain water attractions can be without attentive lifeguards and health and safety measures.

‘Whilst water parks are fun attractions, if safety procedures are lacking they can become dangerous and cause devastating injuries.’

A TUI spokesperson said: ‘We’re aware of this matter, but as the case is proceeding to trial it would be inappropriate of us to comment further.’