A mother been left furious after a teacher poured away her five-year-old son’s blackcurrant squash because it broke the school’s water-only policy.

Stephanie Lapham, 34, criticised Blackhorse Primary School in Bristol for replacing five-year-old Rocky’s squash with water on Tuesday when temperatures hit around 28C in the area.

Ms Lapham has accused the school of ‘child neglect’ because Rocky refuses to drink anything but blackcurrant squash.

She claimed when he came home on Tuesday, he had a headache and ‘was crying all night’ due to dehydration after not drinking all day.

Blackhorse Primary School apologised to Mrs Lapham that ‘the school’s policy hadn’t been clearly communicated to her and that Rocky was left thirsty’.

The school says it will allow Rocky to drink squash for the next seven weeks, until half-term, after which he must follow the water-only policy. 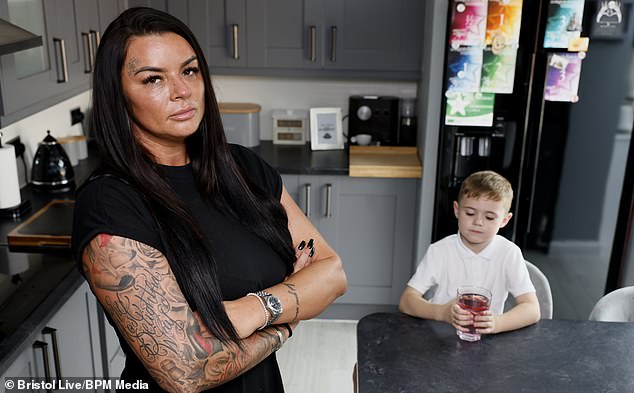 Stephanie Lapham, 34, criticised Blackhorse Primary School in Bristol for replacing five-year-old Rocky’s squash with water on Tuesday when temperatures hit around 28C in the area

It is ‘very proud’ of its culture of ‘physical health and wellbeing’.

Ms Lapham said: ‘Rocky returned to school on Monday after the summer holidays and went into Year One with a new teacher. He came home from school on Tuesday complaining of a headache all evening, really upset and holding his head.

‘He has speech and language development issues, so when he was crying and told me on Tuesday night that his teacher had poured his drink down the sink, I thought he must have got that wrong and there was no way that happened.

‘As I was dropping him off to school the next day, l thought I’d quickly pop over to check with the teacher, and she said, ‘Yeah that’s right – school policy is water.’

‘I said, “So are you saying on the hottest day of the year you poured my son’s drink away?” I told her Rocky had been crying all night.

‘Number one it’s sugar-free, but two, it’s nothing to do with her. It’s a sealed [opaque] bottle and she went out of her way to look inside. They’re there to learn.’

Ms Lapham refused to let Rocky go into class on Wednesday morning. She went into the headteacher Simon Botten’s office to complain.

She said: ‘I went to the head and he told me: ‘It’s school policy to have water but [the teacher] shouldn’t have poured it away.’

‘I said I wouldn’t leave Rocky with the teacher, and he said, “I promise he will keep his squash today.”

‘They put different options on the dinner menu because children are fussy. You could understand it more if I was giving him Red Bull or Coca Cola, but it’s a bit of squash. In Reception he was allowed squash. He would take a bottle in each day. 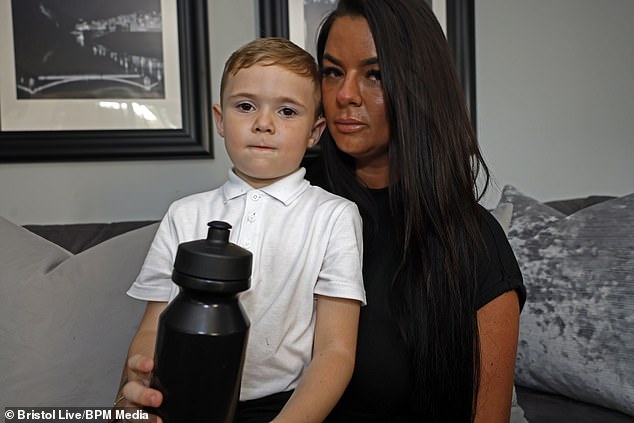 ‘He will not drink water. We will go on holiday and have to take bottles of squash, because he’s so particular and he likes routine. For his school dinner he has a plain ham sandwich every day without fail.

‘Am I happy with that? Not really, but at least he’s having something, and it’s the same with the squash. I can’t help it if he won’t drink water. It’s not their place to judge.’

She says she is aware of complaints from three other parents of pupils in Year One, after their children’s squash was allegedly thrown away in the school.

Ms Lapham described her son as ‘confused’ by the discussion on Wednesday morning, while she herself was ‘really quite upset and close to tears’.

She added: ‘I don’t know how my son is and what is on his mind. Is he going to have a miserable school year? That’s been on my mind.’

She said: ‘The head told me the policy will not change under any circumstances and I’m to “wean him off”. Rocky’s not a drug addict. It’s the most ridiculous thing I’ve ever heard.

‘What Rocky brings in is 99 per cent water with a few drops of squash. I said that it’s worse having dehydrated children who end up in hospital.

‘I suggested Rocky could bring in a bottle of Volvic sugar-free water with a hint of blackcurrant, lemon or strawberry flavour in it, and the head also refused that.’

Mr Botten said that parents often choose Blackhorse because of its emphasis on health. The school has its own farm and a horticulture teacher. 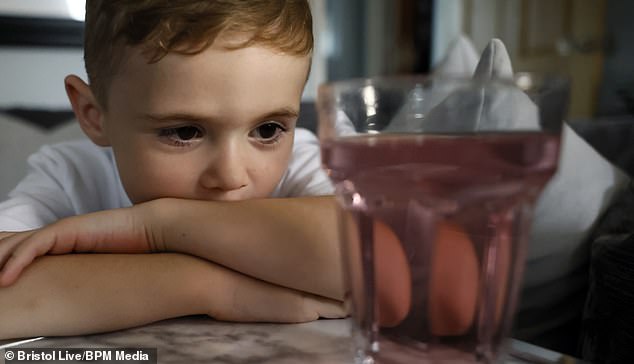 The school says it will allow Rocky to drink squash for the next seven weeks, until half-term, after which he must follow the water-only policy

The farm supplies the school kitchen with fresh vegetables for meals offered to children each day.

He added: ‘Our success in sports is known throughout the region, with a number of children going on to run at a national level – some for Team GB’s athletics academy, and one, Tom Wilstead, earning a sports scholarship to Colston’s School, which led to him being signed to Bristol Bears first team, something the whole school community is delighted to see.

‘We are very proud of this culture we have created and therefore look to ensure that our children are taught about healthy diets from an early age.

‘Like every other school in the local area, and on the advice of the NHS school nurses, Blackhorse has a long-standing policy of only allowing children to bring water in their water bottles.

‘During the pandemic, our priority was to get our children safety and happily back into school, so our staff didn’t impose this rule as clearly as we usually would.

‘However, now we are looking forward to a more normal school year, we do want children to get back into healthy habits.

‘The teacher was following our school policy, by replacing Rocky’s squash with water, but we discussed Ms Lapham’s concerns with her when she told her that Rocky hadn’t drunk the water provided on a hot day.

‘I apologised that the school’s policy hadn’t been clearly communicated to her and that Rocky was left thirsty.’

Mr Botten agreed to allow squash on Tuesday ‘as it was hot again’, but he reiterated that the water-only policy would ‘eventually need to be followed’. He says he offered the school nurse’s help with ‘strategies to encourage Rocky to drink water’.

‘Having discussed the issue with staff and the school nurse, we agreed that, as the pandemic had led to our water policy being loosened, we would allow those children whose parents tell us they don’t like water to bring squash until half-term so that parents can gradually get the children used to drinking water over this period,’ he added.

‘We felt that this was an appropriate compromise and we communicated this to Ms Lapham and the other parents.’