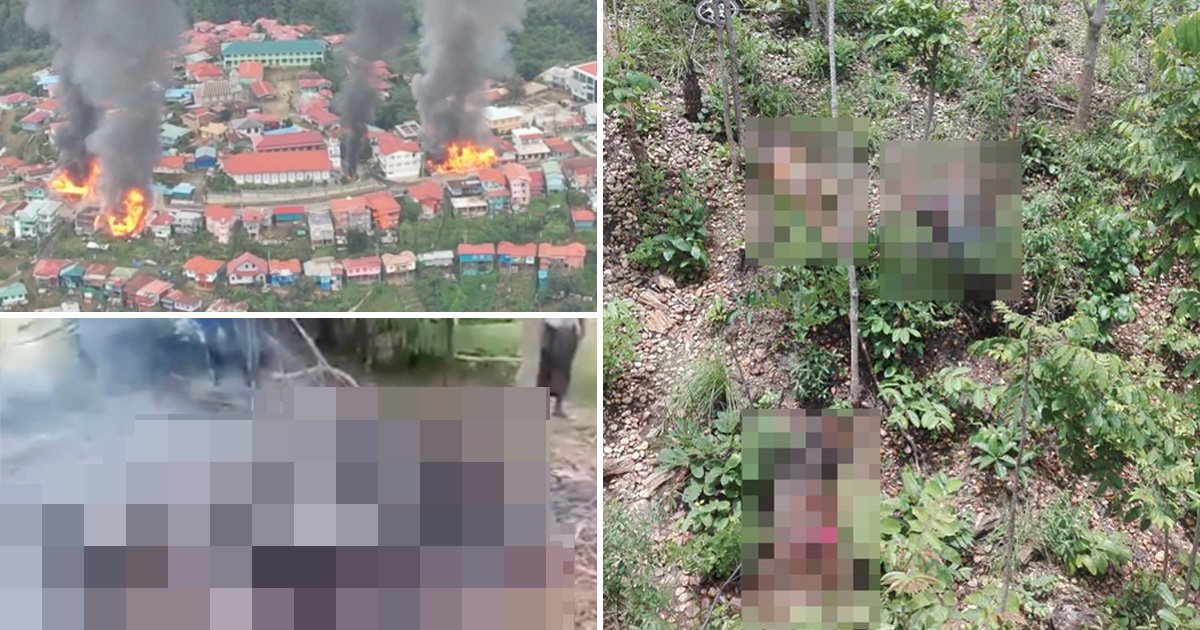 Entire villages in Myanmar were massacred and torched by the country’s military, an investigation has revealed.

The people of Myanmar have suffered violence and terror since a military coup threw the country into chaos in February.

At the time, military commander-in-chief Min Aung Hlaing said he wanted to transform his country into a ‘true and disciplined democracy’ after he overthrew what he said was a fraudulently elected government.

But the military has since reverted to the warfare tactics it used to hold power over Mayanmar from 1962 until 2011 – when democratic rule finally began there.

The country’s soldiers have long been accused of committing atrocities but now an investigation by the AP news agency has concluded they are indeed massacring their own people.

Journalists and human rights workers reported this after interviewing 40 witnesses and studying evidence from social media, satellite imagery and data on deaths.

Drone footage shot by Chin Human Rights Organization in October and December shows fires raging inside buildings and charred churches, collapsed schools and ruined homes in the town of Thantlang.

The town, in the state of Chin, near the Indian border, has seen intense fighting over the last four months and it is now completely empty, according to the organisation.

More than 580 of the area’s buildings have been burned since September alone, Maxar Technologies satellite imagery shows.

One Chin refugee, now in India, told AP that the military killed her cousin and then left his body in the street. She claims she noticed a bomb left under the body.

She said: ‘ That evening, young people went to try and move the body from a distance using a stick.

‘When they moved the body, the mine went off and the body was in pieces. We didn’t get back a body, instead we had to collect pieces.’

Some 10 charred corpses were found in the village of Done Taw, in the Sagaing region, on December 7. Witnesses told AP the military had burned people alive.

Brutal repression has been seen in Myanmar before – particularly against ethnic minorities such as the Rohingya Muslims.

But now these methods are being used against the Buddhist Bamar ethnic majority as well.

In July, images circulated of massacres in four small villages that Myanmar’s ambassador to the United Nations called ‘crimes against humanity’.

Human Rights Watch researcher Manny Maun said: ‘What we’re seeing in Sagaing is really interesting because, you know, we’ve talking about the Bamar heartland that basically should be the core foundation of this military.

‘But actually, this region is extremely diverse, and I think the military really, really misunderstood just how hated they are, they are fiercely hated.’

Indeed, ‘People’s Defence Forces’ (PDF) have sprung up across the country to fight the junta, and have drawn the military into a bloody stalemate.

Since the military seized power in February, more than 1,375 people have been killed by soldiers and police, and more than 11,200 arrested.

Even so, these are just the numbers that can be proved and the reality is expected to be much worse.

AP said the military did not respond to several requests by phone and by email for comment.