The husband of Nazanin Zaghari-Ratcliffe says her case has been a ‘failure of diplomacy and campaigning’ ahead of her return to court in Iran on Sunday.

Richard Ratcliffe said it would take ‘a long time’ for his wife to recover from the psychological trauma of her ordeal, but that continuing media coverage had ‘kept her a bit safer’.

Mrs Zaghari-Ratcliffe, 42, last week completed a five-year sentence in Tehran on spying charges levied by Iranian authorities, the last year of which was spent under house arrest due to the pandemic. 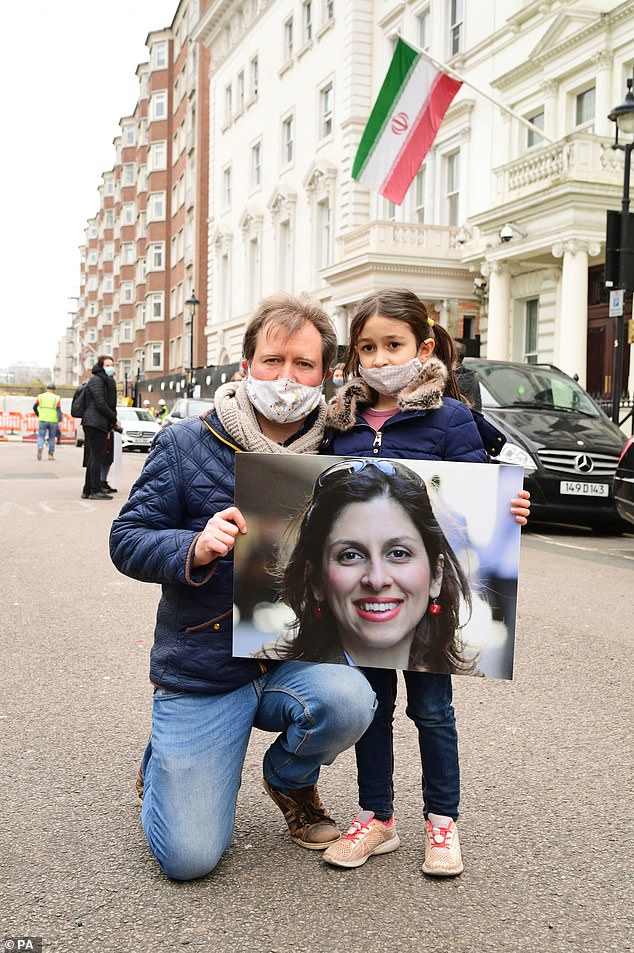 Richard Ratcliffe, pictured outside the Iranian Embassy in London along with his daughter Gabriella while holding a photograph of his wife Nazanin who faces the prospect of another court hearing in Tehran on Sunday

But she must return to court to face more charges in the case some observers have linked to a long-standing debt Iran alleges it is owed by the UK.

Speaking to Times Radio on Friday, Mr Ratcliffe said: ‘She served her full sentence, she’s still being held. That’s a failure of diplomacy. It’s also a failure of campaigning.

‘I don’t think it ever occurred to me at the beginning that it would last this long, because it shouldn’t have done.

‘I think we’ve kept her a bit safer. It sounds a bit rich given all she’s been through already, but some of the stories from her cellmates … are even more harrowing.

‘Keeping her visible has kept her safer and protected. A consequence of so many people following her story meant that bad things couldn’t happen in the same way to her.

‘It may be that this weekend we get a long prison sentence, it may be that we don’t. She remains in harm’s way until she gets on the plane.

‘Until she’s home she’s not home and the ordeal continues.’

It comes after a detailed medical assessment, commissioned by a charity, found Mrs Zaghari-Ratcliffe has been a victim of torture, suffers major depression and PTSD and requires urgent psychiatric treatment.

Human rights group Redress has called on the Government to recognise her as a victim of torture, having sent the Foreign Secretary the 77-page report on the mother-of-one it commissioned from the International Rehabilitation Council for Torture Victims (IRCT). 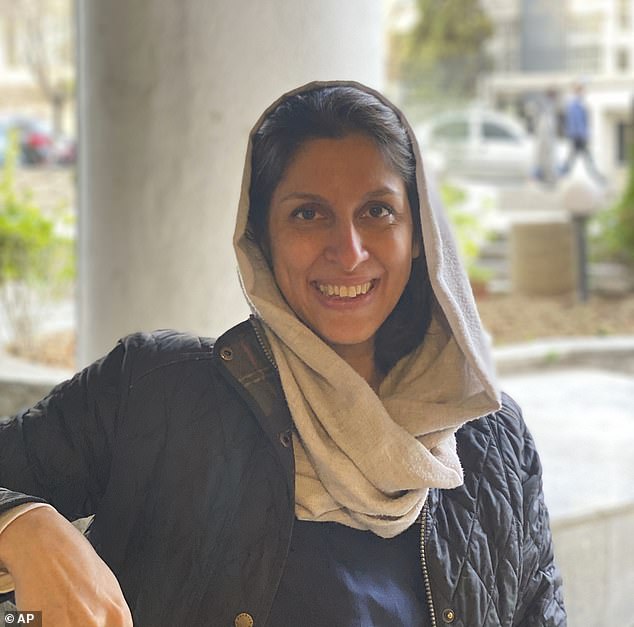 Nazanin Zaghari-Ratcliffe, pictured, has been held by Iranian authorities since 2016 after she was arrested moments before she was due to board a plane to return to the UK

The report says Mrs Zaghari-Ratcliffe’s condition has been caused by ‘extremely stressful, traumatising experiences in the prisons of Iran’ and the uncertainty surrounding her immediate future.

It also says at the beginning of her sentence in 2016, Mrs Zaghari-Ratcliffe was interrogated for hours on end, often blindfolded, while in solitary confinement.

Redress says the report also shows the former Thomson Reuters Foundation aid administrator has suffered hair loss, developed obsessive compulsive disorder about washing, and distress at being separated from her own child.

Speaking about her treatment, Mr Ratcliffe said his six-year-old daughter Gabriella had been ‘weaponised’ against his wife, but that was a ‘standard tactic’.

He said that female guards would call their own children outside his wife’s cell, when she could not, which he described as a ‘real studied cruelty’.

‘In fairness to the Iranian regime they are quite sophisticated about not leaving physical scars but they do an awful lot of cruel tricks,’ he said.

‘Things are still very uncertain… that fear of bad stuff happening again, of being put back in solitary (confinement) will stay with her until she’s safe.

‘It takes a long time for that anxiety to go away.’

Downing Street said that Boris Johnson again demanded the release of Mrs Zaghari-Ratcliffe in a call with Iranian president Hassan Rouhani on Wednesday.

A No 10 spokesman said the Prime Minister had said ‘that while the removal of Nazanin Zaghari-Ratcliffe’s ankle monitor was welcome, her continued confinement remains completely unacceptable and she must be allowed to return to her family in the UK’.

Amnesty International UK has called on Britain’s ambassador in Tehran to visit Ms Zaghari-Ratcliffe before her court hearing on Sunday to show ‘maximum solidarity’ with her.

Downing Street has previously said officials have been denied access to legal proceedings because Iran does not recognise dual nationality.