Nazi grave unearthed: Skeletons of thousands of victims who were shot, stabbed or buried alive discovered in Russia

Russian state investigators are digging up a mass grave of Nazi victims where around 3,700 people including women and children were shot, stabbed or buried alive.

Many skeletons had gun shot wounds to their skulls and were civilians of different ethnic backgrounds.

Some were also stabbed and others buried alive and an operation has been launched to recover the fractured bones. 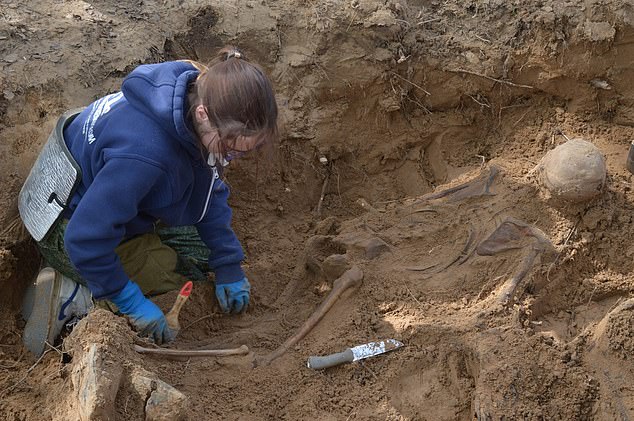 As many as 3,700 skeletons were discovered in the grave know as Batetsky Auschwitz, near Veliky Novgorod city, 360 miles northwest of Moscow 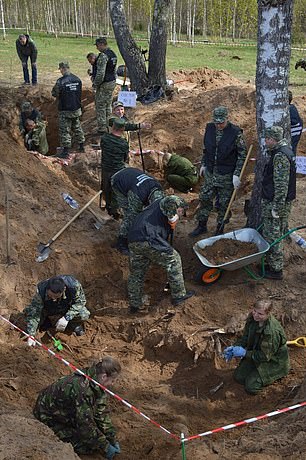 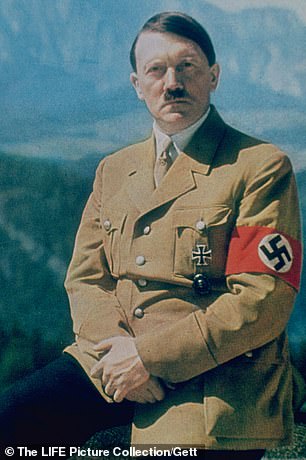 Hitler’s (right) forces carried out the killing (left) between 1941 and 1943, it is believed. Some of the victims who were shot, stabbed or buried alive

The macabre site at a Second World War mass execution range has been called the Batetsky Auschwitz near Veliky Novgorod city, 360 miles northwest of Moscow.

Hitler’s forces carried out the killing between 1941 and 1943, it is believed.

The area was known as a site of mass execution by the Nazis but only now is a full-scale attempted being made to dig up the human remains and give the thousands of victims a proper burial.

A painstaking operation is underway to remove the bones and seek to establish the age, sex and causes of death.

Investigators are studying archives to establish all the circumstances of the Nazi executions.

The work involving Search Expedition group – which actively searches for the graves of victims of war and repression – will continue until all the bodies are exhumed, say reports in Russia. 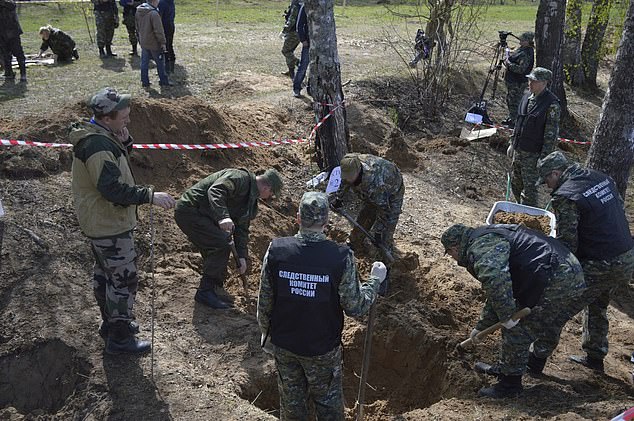 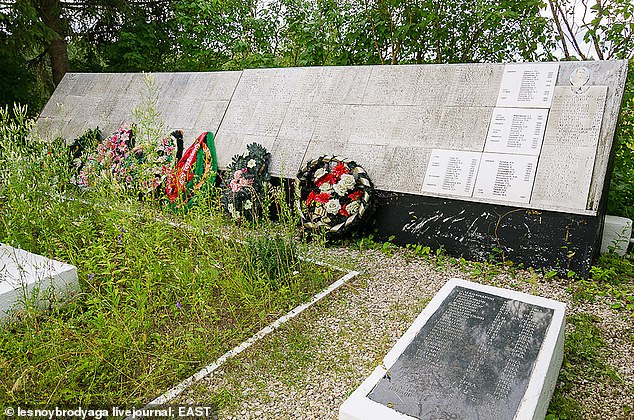 A monument stands for Soviet soldiers and officers executed at the Zhestyanaya Gorka village site between 1941-1943. Currently there are several memorials including the granite obelisk (pictured)

The highest estimate of the human slaughter is 3,700.

Sergei Sevastyanov, head of Novgorodets volunteer search unit, said: ‘We are investigating and will set up a camp here for three weeks to work.

‘The territory is rather big, 32 hectares.

‘The main aim is to find six pits and then check the rest of the territory [for remains].’

When the search is completed, the area will be landscaped and a memorial set up.

Currently there are several memorials including a granite obelisk at a nearby military burial where nearly 800 Soviet soldiers and officers lie. 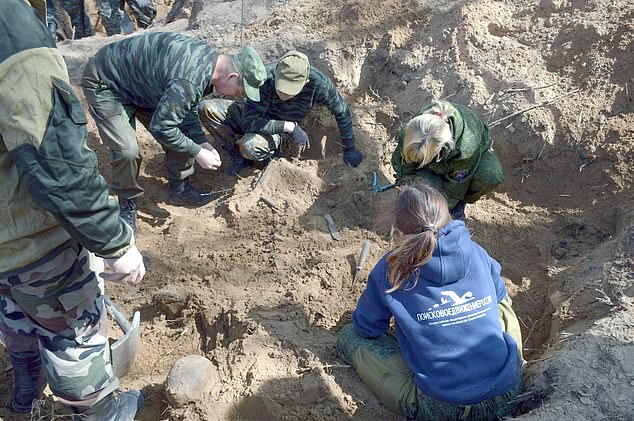 The highest estimate of the human slaughter is 3,700 in the atrocity that saw men, women and children shot, stabbed or buried alive

There is also an existing memorial – a cross – in the memory of executed civilians.

A memorial rock marks the site of Jews executed here.

Father Sergyi Vasilyevm of the nearby Orthodox Church of the Repose of Madonna, said: ‘Executioners were working non-stop.

‘Victims were brought in trucks from Leningrad region. 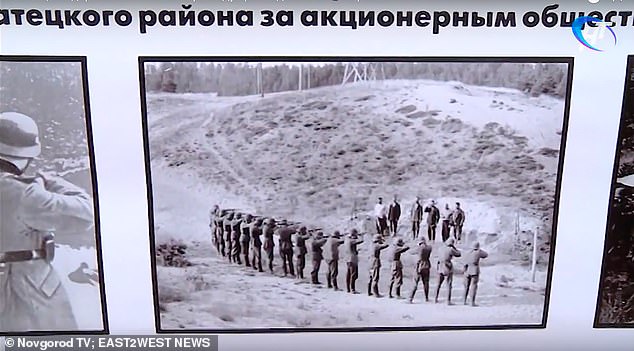 ‘Sometimes they saved bullets and stabbed helpless people with bayonets or buried them alive.’

A German sub-division was responsible for the executions, but under their command were people of Russia, Estonian and Latvian nationality, say local sources.

The Russian Investigative Committee has launched an initial probe into the discovery of human remains. 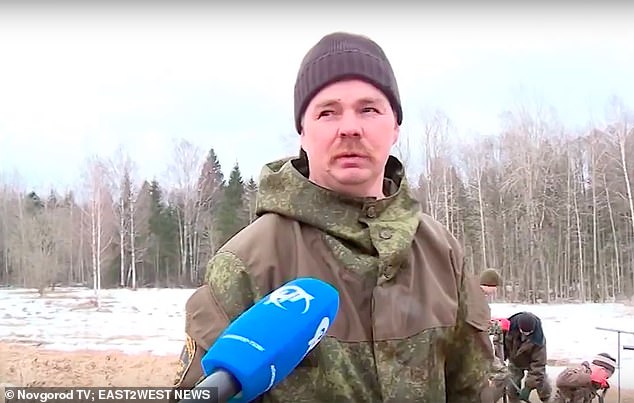 Sergei Sevastyanov, head of Novgorodets volunteer search unit, said: ‘The main aim is to find six pits and then check the rest of the territory [for remains]’

‘During an initial inspection of the site, five skeletal corpses were removed,’ said a statement from the committee.

The first five human remains had ‘gunshot wounds to the skull’.

Investigators located ‘fragments of personal belongings and clothing’ of the victims.

‘In the immediate vicinity of the cemetery, cartridges from foreign-made automatic weapons were found and removed. 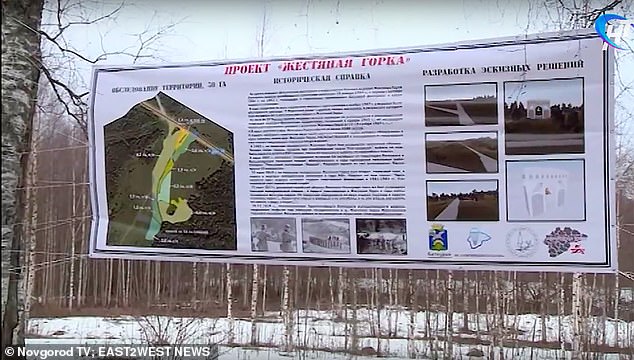 Father Sergyi Vasilyevm of the nearby Orthodox Church of the Repose of Madonna, said: ‘Executioners were working non-stop’

‘Judicial, medical and forensic examinations were arranged to determine the age, sex, and cause of death of the remains.’

The opening of the mass graves comes ahead of Russia on Thursday holding sombre commemorations marking the 74th anniversary of the end of the Second World War in Europe.

The ceremonies on Red Square and all around Russia will be led by Vladimir Putin.