The NFL spent its first 100 years trying to be all things to all people. It might spend the next 100 deciding which of its fans it can least afford to enrage.

Week 1 of the 2020 NFL season is in the books, and with it the league’s first attempt at a more progressive stance in support of social justice. For longtime fans accustomed to a league that’s generally about as progressive as a cinderblock, it qualified as something of a shock to see protest incorporated as part of every pregame show and pregame ritual. “End Racism” painted on end zones may not do much to end racism, but it damn sure alters the league’s image.

Make no mistake: the NFL didn’t align itself with progressive causes out of a sudden sense of altruism or a belief in the immediate need for change. The NFL looks out for one constituency: itself. The league determined that societal winds were blowing progressive, listened at last to the concerns of its players, and decided to point its sails in a new direction.

Now, the winds of no-change are blowing back, hard. The NFL now has to reckon with a very loud stick-to-sports crowd and determine just how significant an impact it could have on the league’s brand and revenues. Are the NFL’s new critics a substantial bloc or just a very loud slice, light without heat? It’s tough to tell at the moment, but for the NFL, it will be a crucial question to answer.

At their heart, the protests are about a basic, incontrovertible human rights issue: Black Americans want the same fair treatment as everyone else in this country. Whether through muddled messaging, bad-faith analysis, genuine political differences or a failure to listen, the message isn’t connecting with a swath of America.

Right here at Yahoo Sports, we got our very own look at how a segment of sports fandom views the NFL’s newly progressive stance. We made a simple enough request, tucked at the bottom of a story on NFL protests in Tuesday morning’s Yahoo Sports newsletter: let us know how you feel.

The results were, to say the least, substantial. Hundreds of emails, arriving so fast that my inbox was rolling like a slot machine, the vast majority bearing messages like this: 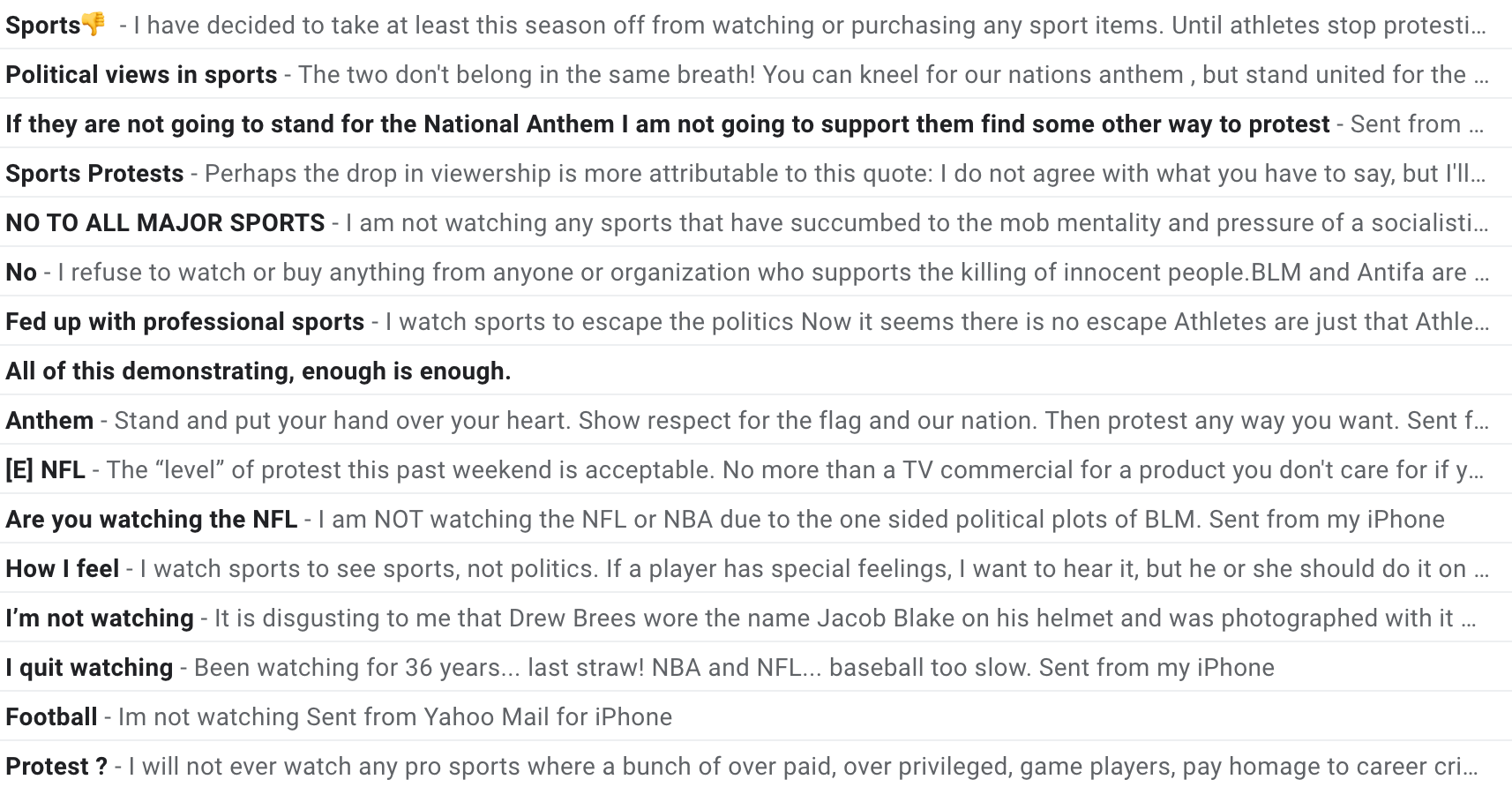 This is not in any way a scientific poll. This is a collection of responses to a question within a single email newsletter. Still, when you get hundreds of negative responses and only a handful of positive ones to a nonpartisan story … well, you can pretend it’s an aberration, or you can dig a little further.

It’s easy for #Resist Twitter and progressive-minded media to scoff at blowback like this, slagging critics of protest movements as uninformed at best, outright racist at worst. Some of that condemnation is valid — despite what some critics contend, politics and sports have been intertwined forever (though never to this pervasive and obvious a degree). A fair number of protest critics lean hard into the concept of patriotism while neglecting to remember that both players and their supporters are also very much “real Americans.”

Granted, a few of the emails I’ve gotten make me wonder how they arrived here from 1954. And, yes, a whole lot of people seem to believe their view of the world is the Only Correct View … but it’s not just the NFL’s critics who are guilty of that, is it? We’re all convinced that we’re right and the other side is a teeming horde of undereducated, malicious trolls.

Still, it’s worth remembering that just wanting to watch a game without hearing political commentary isn’t an inherently racist or disrespectful act, any more than wanting to get your food at a restaurant (remember restaurants?) without political discourse from your server would be.

For protest supporters, it’s also worth a little thought experiment of imagining, say, a stadium filled with THANK YOU POLICE slogans or the names of officers killed in the line of duty stenciled onto helmets. If you’re OK with one form of messaging statement and not another, well … it’s not politics in sports that you object to, it’s other people’s politics.

Bottom line, the NFL has a social justice blowback issue to deal with that’s not going away. It can’t take its usual everything-to-everyone approach anymore. If the league leans into social justice, it turns off a very loud segment of its stick-to-sports fanbase. If it throttles back on the social justice messaging, it enrages the players and fans who placed faith in the league to carry through on its promises. If it reverts to a tepid messages-in-the-end-zone route, the league ticks off everybody.

Which way will the NFL lean? Toward the money, of course. The question is whether that money lies in old ways or new territories.

We’ll find out soon enough if the Week 1 ratings declines — NBC dropped 15 percent, CBS 12 percent — were a blip or a trend. We’ll see if sponsors stick with the NFL through possible ratings downturns. We’ll see if the league continues to press forward with social justice initiatives … or lets them drift into the background, like paint fading off end zone grass.

No matter which way the league turns, the NFL is now a political battlefield, and the games are only a small part of the conflict.