A university nightclub has been forced to apologise after promoting a serial killer-themed Halloween party complete with pictures of Jeffrey Dahmer and Ted Bundy.

The event announcement, which was posted to the Crisis student night Instagram page to be held at Rock City nightclub, was swiftly deleted after University of Nottingham students labeled it ‘tone-deaf’ and ‘triggering’.

A Crisis spokesperson confirmed the party will still go ahead on October 31st as scheduled, however it will now be a generic Halloween theme. 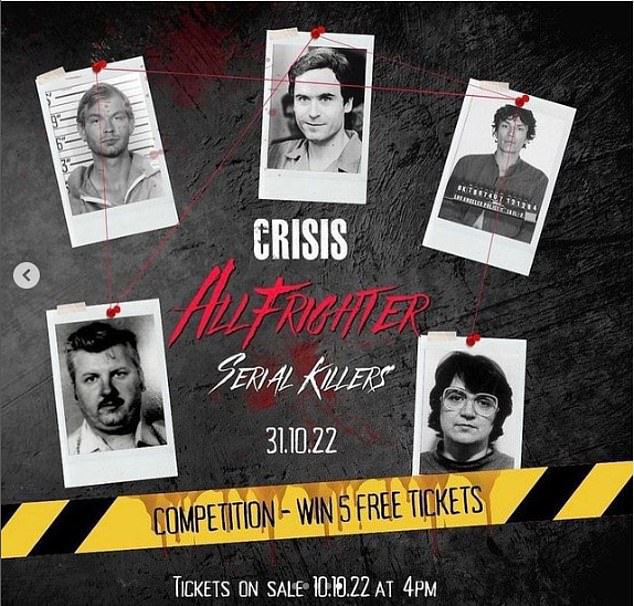 One of the comments on the initial post read: ‘I think this is a bit tone-deaf if I’m honest.’ Within 16 hours, the post had been deleted.

A student who was employed to promote the nightclub shared an open letter voicing her qualms about the themed night.

She said: ‘Ted Bundy and Jeffrey Dahmer were both known for hunting their victims in night clubs… so it is absurd to me why we would have students dressed up as these people, inside a nightclub.

‘People should not be allowed to dress up as serial killers for Halloween, bearing in mind having a student nightclub encourage it by having it as the theme of the night.’

The post attracted more than 990 likes and prompted a public response from Crisis, who acknowledged her concerns.

In the apology, event organisers said ‘after consideration, [they] realised this was an upsetting and triggering concept’.

‘We would like to unreservedly apologise to anyone we have offended or caused distress to.’

The statement also stressed neither Rock City nightclub nor the Students’ Union were involved in choosing the theme and vowing to consult with patrons for future theme nights.

The controversy also sparked coverage in the university student magazine.

In spite of the backlash tickets for the event, which started at £7.40 and went up to £9.70, are already sold out.