Melbourne’s traditional Australia Day parade may have been cancelled due to COVID-19, but families were still keen to come to the city for a day out on Tuesday.

While thousands took part in the Invasion Day march through the CBD, a small, multicultural crowd gathered at the Shrine of Remembrance to witness the fly-past of the RAAF Roulettes and the army’s 21-gun salute. 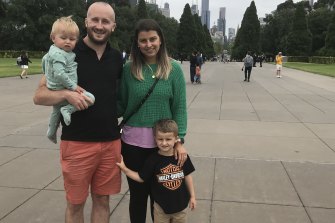 David and Bruna Kilroe with their children Rafael and Jack.Credit:Carolyn Webb

David and Bruna Kilroe, immigrants from Ireland and Brazil who were off to stroll around the Royal Botanic Gardens after their sons Jack, four, and Rafael, one, marvelled at the jets, said they both supported celebrating Australia Day, but it should not be on January 26.

“The date is a symbol of hurt for the Aboriginal people,” Mr Kilroe said.

Mrs Kilroe said: “We understand why it’s hard [for Indigenous people] to celebrate today, that Australia Day is Invasion Day.”

Sanjay Karmakar, 46, of Maribyrnong, said every country should have a celebration day. Tuesday was Republic Day in his native India and there were big parades. 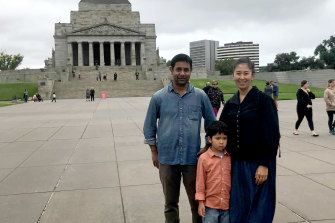 His partner, Japanese immigrant Fuyuka Iijima, said Australia Day was a time to reflect on the country’s history.

Chinese immigrant Ymir Yu, 39, of Camberwell, brought her daughters Cynthia, six, and Claire, five, to the shrine to educate them. “I want to show them the shrine, tell them about the war, the history of Australia, how this country was founded,” she said.

Earlier on Tuesday at the official Victorian flag-raising ceremony on the Government House grounds, Wurundjeri elder Aunty Joy Wandin Murphy called for the Australia Day date to be changed.

Referring to atrocities against Indigenous people, she said many had been taken “well before their time and for the only reason that they were considered subhuman or not fit for this earth”. 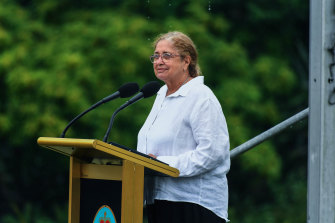 She said she had lost patience with Mr Morrison.

“In his first term of office, he made a statement about changing the constitution,” she said. “We talk about ‘let there be trust, let there be confidence’, and all we hear is about being patient. We’ve almost lost that patience. I have.”

Ms Dessau said Tuesday was the first time many Australians would sing the national anthem with the words “for we are one and free” instead of “young and free”, which acknowledges Indigenous people’s presence for thousands of years.

But she said they were empty words if we did not practise real respect of Indigenous Australians and of immigrants.

Premier Daniel Andrews said he was confident Victorians were taking “profound” steps towards a treaty that meant “true justice for Aboriginal people, a true partnership, for a stronger, more honest, more equal future”.