Soon after a fleet of high-powered weapons was paraded through Pyongyang over the weekend to mark the 75th anniversary of North Korea’s reigning Worker’s Party, dictator Kim Jong Un took to the podium to convey a rare moment of poetic humility to an adoring, mask-free crowd.

“Our people have placed trust, as high as the sky and as deep as the sea, in me, but I have failed to always live up to it satisfactorily. I am really sorry for that,” the 36-year-old leader declared, according to a translation published by The Korea Times. “Although I am entrusted with the important responsibility to lead this country upholding the cause of the great Comrades Kim Il-sung and Kim Jong-il thanks to the trust of all the people, my efforts and sincerity have not been sufficient enough to rid our people of the difficulties in their lives.”

Wiping away tears, Kim maintained the widely debunked claim that the hermit kingdom has had a zero-coronavirus infection rate, heralding his appreciation to the troops for preventing a devastating outbreak and peppering his speech with anecdotes pertaining to the “grave challenges” and “countless ordeals” the government has faced.

Analysts have since pointed to the emotional outpouring as evidence of mounting pressure on the regime, which not only includes the pandemic but natural disasters and international sanctions.

“I am ashamed that I have never been able to repay you properly for your enormous trust,” Kim continued. “My efforts and devotion were not sufficient to bring our people out of difficult livelihoods.” 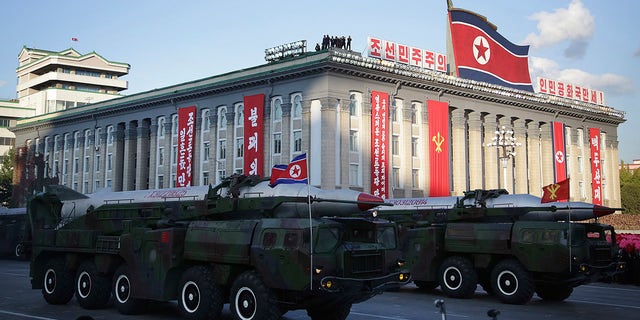 FILE – In this Oct. 10, 2015, file photo, warheads are paraded during a military parade during celebrations to mark the 70th anniversary of North Korea’s Workers’ Party in Pyongyang, North Korea. For months, North Korea has been relatively uncombative, as leader Kim Jong Un grapples with the coronavirus pandemic, a string of natural disasters and the deepening economic pain from years of tough U.S.-led sanctions. (AP Photo/Wong Maye-E, File)

And while the leader underscored his hopes that the North and South peninsulas would “join hands” when the coronavirus crises wanes, the sentiment isn’t being regarded in such simplistic terms by all.

Kim Chong-in, the leading opposition figure in South Korea, scoffed at the damp-eyed display as a mere shedding of “crocodile tears,” weeks after the shooting of a South Korean fisheries official.

Meanwhile, Chinese President Xi Jinping sent something of a contrasting message over the weekend by advocating, according to the Daily Mail, an intention to “defend, consolidate and develop” ties with North Korea.