Now Army is sent in to help hospitals cope: As Covid isolation rules force NHS staff to desert the wards, military medics are given task of caring for the sick in London

Hundreds of troops are being sent into London hospitals to fill in for NHS staff who are isolating because of Omicron, it was announced last night.

The 200 soldiers, whose deployment was requested by NHS trusts, include 40 medics who will help directly with patient care on wards.

The remainder will assist with medical and general duties such as checking in patients and conducting basic health checks.

Troops were last deployed to hospital wards in early 2021 when NHS staff were overwhelmed by the numbers of in-patients who had contracted the virus.

But this time the soldiers are being sent in due to the staffing shortages in hospitals caused by the high numbers isolating. 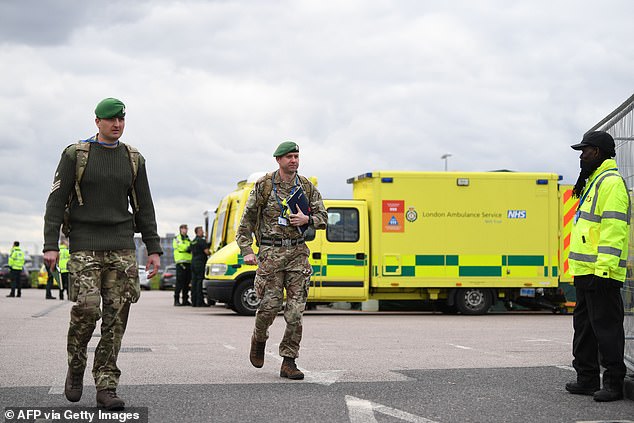 It is understood that the Department of Health submitted a request for additional MoD personnel on behalf of a number of hospital trusts in London which are experiencing staffing issues.

Several have declared ‘critical incidents’ in recent days, with health chiefs claiming that the service is under enormous strain.

But there has been debate over how severe the pressure actually are, with hospitalisations and severe illness much lower due to the mildness of Omicron.

Ministers yesterday pushed back against claims hospitals were on the brink of collapse, with Environment Secretary George Eustice predicting that the NHS’s acute problems would prove to be ‘quite short lived’.

Meanwhile, Boris Johnson said it was ‘not true’ that the health service did not have enough staff to cope and Grant Shapps, the Transport Secretary, said that it was ‘not entirely unusual for hospitals to go critical over the winter’.

Latest Department of Health figures show that on Wednesday there were 179,756 positive Covid tests recorded across the UK, down 5 per cent on the same day last week. However, looking at the week-by-week numbers, the number of cases is still rising.

The 200 military personnel will be broken down into 40 teams of five, each comprised of one medic and four soldiers who will assist as doctors and nurses deem appropriate.

The troops have been told they will be working in hospitals for at least three weeks.

Last night Defence Secretary Ben Wallace said: ‘The men and women of our Armed Forces are once again stepping up to support their dedicated colleagues in the NHS.

‘They have shown their worth time and again throughout this pandemic, whether driving ambulances, administering vaccines or supporting patients and they should be proud of their contribution to this truly national effort.’ 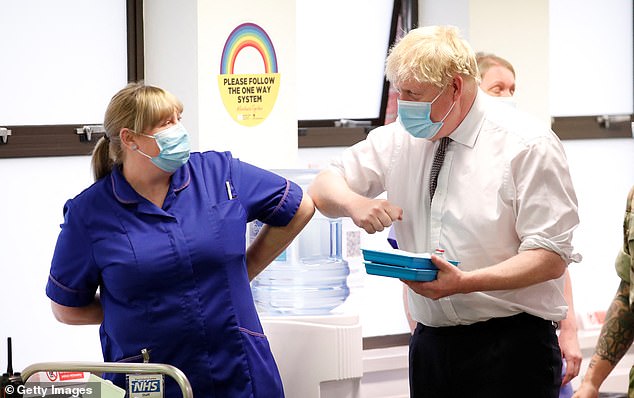 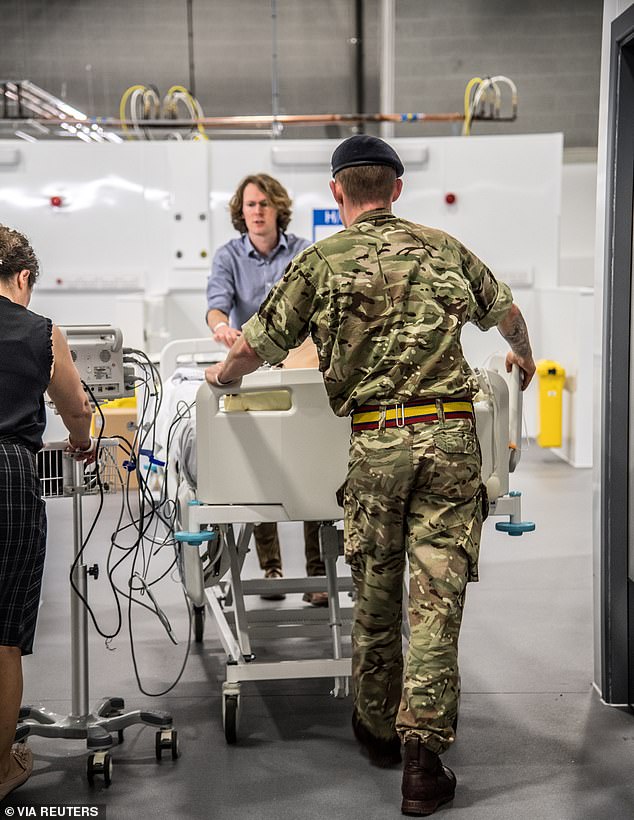 Military personnel assisting at the NHS Nightingale Hospital in Harrogate, North Yorkshire in 2020 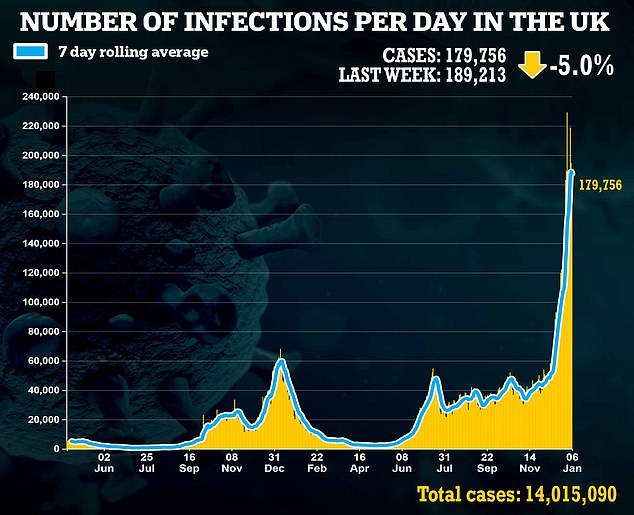 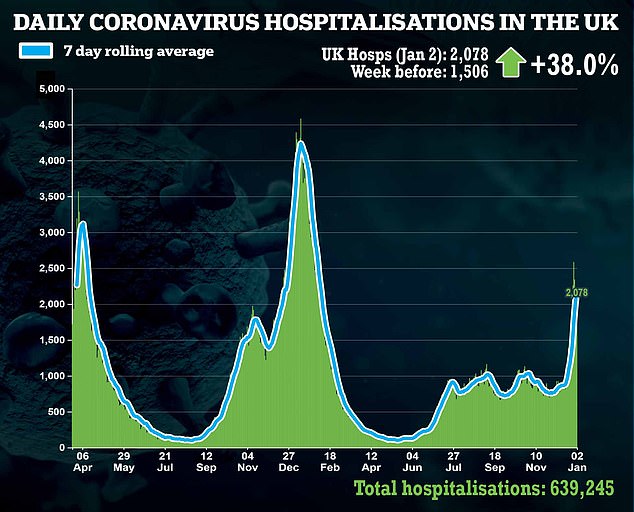 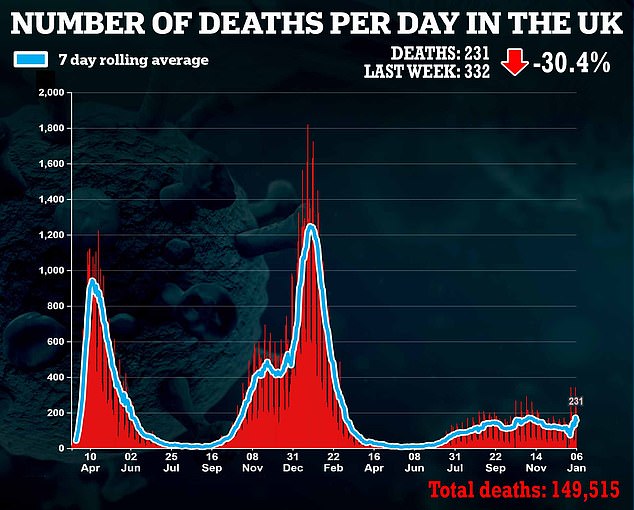 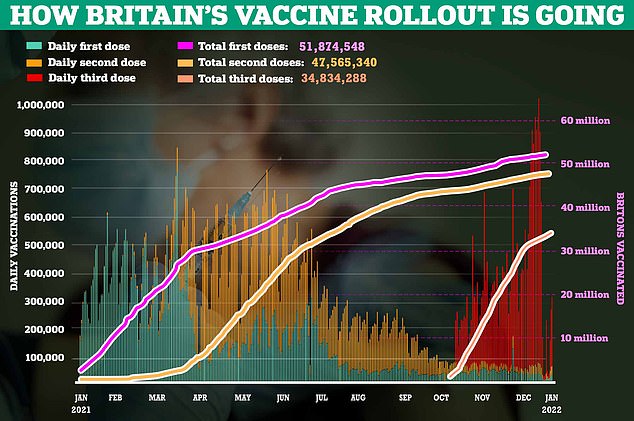 Defence chiefs are also providing 32 personnel to join ambulance crews until the end of March. Downing Street has insisted the number of critical alert declarations was ‘not a good indicator’ of the pressure on the health service.

And Mr Shapps told Sky News the NHS was facing ‘very real pressures’, but said these were not insurmountable.

Visiting a vaccination centre in Northampton, Mr Johnson said: ‘I appreciate that the NHS is under huge pressure.

‘We’ve had wave after wave of Covid and our NHS has responded magnificently.’ He said staff numbers had been increased, and that, combined with calling in retired staff and volunteers, would ease the strain.

He said Omicron was milder than other variants but said: ‘We’ve got to give the NHS all the help we can through the next period.’

Mr Eustice predicted the country would get past the Omicron peak of infections ‘relatively soon’. However, Matthew Taylor, chief executive of the NHS Confederation, said it was ‘clear that we are facing a staffing crisis’, with around 10 per cent of workers in self-isolation or on sick leave.

Data from the Zoe Covid app study suggested cases are falling among those aged 18 to 35 but rising in older groups, including the over-75s.

Dr Claire Steves of King’s College London, which runs the app, said: ‘This is the group we need to protect as they are the most likely to be hospitalised.’