NSW has reported 633 new local cases, the highest number ever recorded in the state within a 24-hour period.

NSW Premier Gladys Berejiklian warned current data was showing the state “hasn’t seen the worst of it”, with every case transmitting to at least one other person. 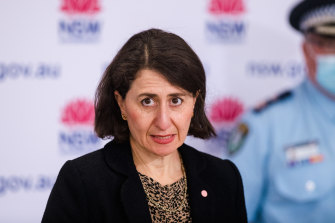 “The way that we stop this is by everybody staying at home,” she said.

“You cannot get the virus if you do not have contact with other people. You have to assume, no matter where you are in the state, that every time you set foot out of your door, that you have the virus or anybody you’re in contact with has the virus.”

There were three deaths since Tuesday’s update: a man in his 60s at Liverpool Hospital who acquired his infection within the hospital’s geriatric ward and two men in their 70s who were being treated at Nepean Hospital.

Nearly 500 of the record 633 cases reported in NSW today were from Western Sydney.

They included 224 in the South Western Sydney Local Health District, 216 in the Western Sydney district and 54 in the Nepean Blue Mountains district.

“Whilst vaccination will be an aid and essential for us getting to a point where we can live safely with COVID, our vaccination coverage at the moment is far too low,” the Chief Health Officer warned.

“We need to push that up as much as we can but, in the meantime, we also need to do everything we can to not come in contact with anyone, to minimise our movements and to continue to get tested and isolate if you have the most minimal of symptoms.”

Case numbers have continued to rise in regional NSW, with 23 new cases recorded in western NSW.

Seventeen of the cases were in Dubbo, but NSW Deputy Premier John Barilaro said cases had also been detected in Mudgee, Narromine and Gilgandra. There were four new cases in the state’s Far West Local Health District: three at Wilcannia and Bourke and the case reported at Broken Hill on Tuesday.

An additional 15 cases were reported in the Hunter-New England area, where the virus has been circulating for over a fortnight. Seven of the cases, located in Newcastle, New Lambton and Cardiff, were infectious in the community, Hunter New England Health posted on Facebook.

NSW Chief Health Officer Kerry Chant said there had also been sewage detections at Bathurst, Orange and Yamba and asked locals to come forward for testing with even the most minimal of symptoms.

Mr Barilaro said the transmission was placing regional NSW “on a knife edge”.

“Western NSW is our focus, we need everybody in the region to do the right thing,” he said.

Two schools in Sydney’s west will be closed today after positive COVID-19 cases were recorded in their communities.

Mount Lewis Infants School, in the Canterbury-Bankstown local government area, has closed after a student tested positive. Kings Langley Public School, in Sydney’s north-west, will also be closed on Wednesday for cleaning and contact tracing after a member of the school community tested positive.

People aged 16 to 39 in Sydney’s 12 local government areas of concern can book Pfizer vaccine appointments on Wednesday with shots to start on Thursday. The bookings can be made on the state government website.

There were 24 new local cases reported in Victoria on Wednesday, including six with no known source.