Liver disease currently kills 40 people in the UK every day, but that toll is set to rise even higher as a result of the nation’s ever-expanding waistlines.

Symptoms of NAFLD include tiredness, yellow eyes, jaundice and discomfort on the upper right side of the stomach area, where the liver is. 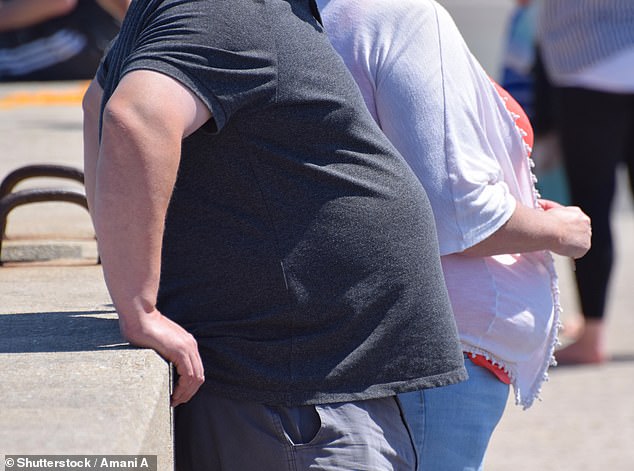 Liver disease currently kills 40 people in the UK every day, but that toll is set to rise even higher as a result of the nation’s ever-expanding waistlines

Pamela Healy, chief executive at the British Liver Trust, said: ‘Being obese or overweight is the main risk factor [for NAFLD] and experts predict that it will become the leading cause of liver disease in the UK in the next ten years.’

She continued: ‘The UK has the highest obesity levels in Europe with two thirds of adults being overweight. We need a significant response to address this. As a nation, we need to recognise that this is not just down to individuals but is a public health issue – we have created an environment where being overweight is the norm.

‘The Government must urgently tackle the accessibility and abundance of unhealthy food which is significantly cheaper than healthy alternatives. This has to start with reinstating plans to restrict multi-buy deals and advertising of unhealthy foods with immediate effect.’

The warning follows ministers’ decision to delay those two key policies amid the cost of living crisis. Plans to ban ‘buy one, get one free’ deals – or BOGOFs – for food and drink products that are high in fat, sugar and salt have been shelved until October next year at the earliest. A ban on junk food TV adverts before a 9pm watershed has been delayed until January 2024.

The number of hospital patients admitted for conditions where obesity was a factor was around 1million for 2020 – up 17 per cent on the previous year. Professor Stephen Ryder, a leading hepatologist and medical adviser to the British Liver Trust, said: ‘Greater awareness of the risk factors of fatty liver disease is crucial.

‘We also need patients to have much better access to non-invasive diagnostic tools to help to catch people earlier in their disease so they can make lifestyle changes or seek other treatments that will help them to prevent further damage and improve the health of their liver.’

He said of those diagnosed with NAFLD: ‘Losing weight and eating a healthy diet is also the first line of treatment. There is good evidence that losing 5 to 10 per cent of body weight can control and, in some cases, reverse the condition.’