The vibrant frescoes on the ceilings of the 163-year-old building in central Victoria belie its history as a humble pasta factory.

The artworks are among the features partners Jennie Wilmoth and Jenni Draper – “The Jens” – fell in love with when they first inspected the rustic, heritage-listed Italianate building in Hepburn Springs, near Daylesford, about a 90-minute drive north-west of Melbourne.

The property was built by Italian political refugee brothers Pietro and Giacomo Lucini in 1859 to house their fledgling pasta-making business. The two-storey building, which became known as the Macaroni Factory, was where the brothers made their fortune in pasta. They later profited from mining. 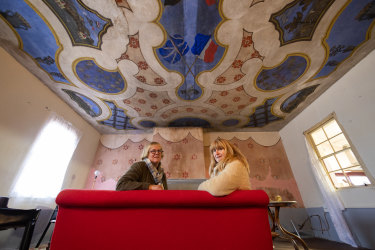 Gazing at history: the new owners of the Old Macaroni Factory Jenni Draper, left, and Jennie Wilmoth in the former drying room, now the lounge, with ceiling mural by Giacomo Lucini.Credit:Jason South

The Old Macaroni Factory has now passed out of the Lucini descendants’ hands for the first time.

But new owners, Wilmoth and Draper, have vowed to make “no radical changes” to the former factory out of respect for its rich history.

Wilmoth says the words “gorgeous” and “delicious” came to mind when they walked inside the property for the first time in January.

Paintings on some ceilings, executed by Giacomo in the 1860s, depict verdant scenes from the siblings’ home town of Intra, on Lake Maggiore in northern Italy. 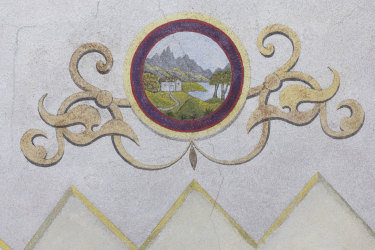 One of the vibrant frescoes inside the Old Macaroni Factory.Credit:Jason South

But one painting, on a bedroom ceiling, depicts a woman wearing a patriot’s cap who is chained to a wall — an allusion both to the opera Il Trovatore by Giuseppe Verdi, and to the brothers’ pasts.

Verdi supported the unification of Italy, as did the Lucini brothers. The Lucinis fled to Australia in the 1850s, having backed the failed campaign for Italian democracy led by Giuseppe Mazzini. 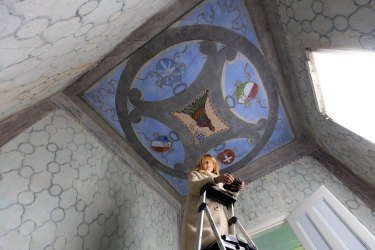 Jennie Wilmoth with Giacomo Lucini’s painting of a woman in chains, an allusion to Italy’s political oppression.Credit:Jason South

Wilmoth likes to gaze up at the paintings and imagine the brothers’ lives in Italy, including their bravery as political rebels.

“To think that we hold a little part of Italy’s history in Hepburn Springs,” Wilmoth said. “I find that incredible.”

In Victoria’s goldfields, the Lucini brothers prospered making and selling pasta, salami and olive oil to miners and invested in mines. They ran the Hepburn Democratic Club from the factory, discussing politics and raising funds for widows and orphans of dead patriots in Italy.

The 13-room building features a cellar, pasta-making room, long parlour and kitchen on the ground floor, with living areas upstairs.

Wilmoth and Draper also fell in love with the meandering garden with its grape vines and pear, apple, fig and olive trees. 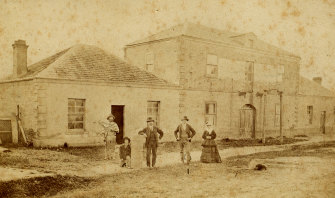 The Macaroni Factory circa 1870. Pietro Lucini, centre, with his nephew Cosmo, kneeling, and at right Giacomo Lucini and his wife, Rosa.Credit:Maria Viola

The pair will work with Heritage Victoria and a heritage architect to restore the Palladian style factory.

Wilmoth says they “won’t be making radical changes” and will maintain the building’s character. The pair hope to stabilise stone work, rewire the building, install hydronic heating and possibly upgrade the 1940s kitchen.

They also plan to open (if permitted) the factory as a private dining space, for example for special birthday lunches. They may also open a bed and breakfast. 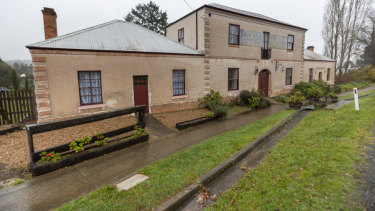 The Jens previously converted an 1869 bluestone church at Newlyn, west of Daylesford, into the successful Scrub Hill wedding venue, which they ran for six years from 2015 and recently sold.

The factory’s vendor, 76-year-old Maria Viola, who lives next door, gets emotional when talking about the sale.

Viola, the great-granddaughter of Giacomo Lucini, ran Lucini’s restaurant from the building for 14 years until 2017. She is heartbroken at not having the funds to maintain the factory and having to put it on the market.

However, she feels the factory is in good hands. “They are lovely ladies, and they love the building,” she said. 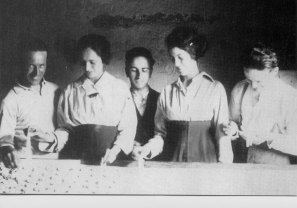 The respect is mutual. Wilmoth says: “We have a pledge with her that she can come any time, particularly to sit in the garden because that’s her treasure. ”

Viola has shared many stories about the factory, about which she wrote her master’s thesis.

“So she knows, intimately, this place and its stories,” Wilmoth says. “And we want to be able to keep telling those stories, so we defer to her often.”

Wilmoth says the aim is to leave the factory better than they found it.

“We understand our responsibility, as part of the community, to ensure its longevity, and to ensure it’s going to stand for many generations to come, via our intervention.”