The election, 25 years after Nelson Mandela led South Africa out of apartheid and into democracy for all its citizens, was seen as a referendum on the ANC. The previous president, Jacob Zuma, became embroiled in numerous corruption scandals while the economy lagged and unemployment and inequality deepened, and resigned in February 2018. 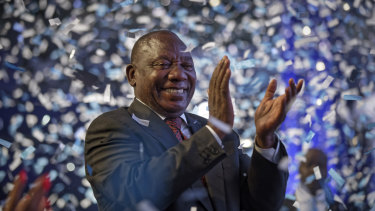 President Cyril Ramaphosa applauds as confetti is launched at the end of the results ceremony in Pretoria, South Africa.Credit:AP

In Wednesday's vote, the ANC continued its steady slide, falling below 60 per cent in a general election for the first time in its history. Voter turnout was also the lowest in general election history. But with few upsets in regional elections, the result was mostly status quo.

Analysts have debated whether a weak showing for the ANC will help or hurt Ramaphosa, who is 66, in his efforts to commandeer the party after nine years of control by Zuma.

"That the ANC is now winning elections by what elsewhere we'd call a normal margin is a sign of anger at the past nine years, but it is also the sign of a maturing democracy," said Ralph Mathekga, a South African writer and political commentator. "I'm of the mind that this is the sweet spot for Ramaphosa. The blame still goes to Zuma, and Ramaphosa avoids being the first ANC leader to lose a majority."

Since Ramaphosa took over from Zuma last year, he has replaced many of his predecessor's appointments in the cabinet and in state-owned enterprises in an attempt to restore investor confidence in an economy that recently slipped in and out of recession. He also approved a judicial inquiry into Zuma's alleged improprieties, which Zuma denies.

The official website on Saturday showed the ANC with the largest vote share after 100 per cent of the ballots had been counted in all 22,925 districts.

The commission also counted 235,449 spoilt ballots. The reason for this relatively high figure is still unknown. Analysts say it could range from voter frustration to confusion over an unusually long ballot paper.