Police have released composite images of two men accused of dangling a teenager from the window of a high-rise building in Fitzroy before sexually assaulting her in 1982, in a bid to solve the decades-old case.

Police allege the men, along with two other men in the room, assaulted the then-19-year-old woman from Carlton, after she went to their Fitzroy apartment to watch the AFL grand final on September 25, 1982. 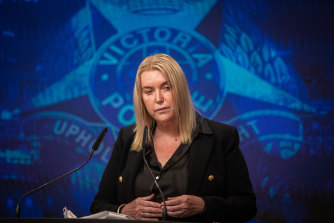 The woman, referred to by police as Sharni, was taken to the apartment by a friend of her neighbour, a man named Chris, who left her alone with the four men in the apartment’s living room after arriving.

She told the police one of the men attempted to sexually assault her and when she protested, two men carried her to an open lounge room window and dangled her out, threatening to drop her if she didn’t stop resisting.

She was then brought back to the living room, where she was allegedly sexually assaulted by all four men. When she was finally left alone she ran through the front door and down the stairs.

Police said the woman tried to maintain eye contact with each of the men and remembered detailed descriptions of two of the alleged offenders.

The first man is described as southern European with a stocky build. He was wearing jeans and a green Exacto brand T-shirt. The second man was Caucasian, with a thin build and green eyes. He was wearing striped pyjama shorts. 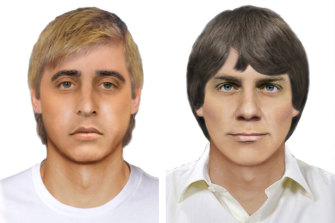 Composite image of the two men described by the victim.Credit:Police Media

All four men spoke in a foreign language.

Police believe the men would have been aged in their 20s at the time and would now likely be in their 60s.

They are appealing for anyone who recognises the men to come forward. They would also like Chris and the woman’s neighbour, who lived in a now demolished home on 216 Rathdowne Street in Carlton, to contact the police.

She said historical sexual offending investigations were complex, but believed someone in the community could have crucial information that could help police solve the case.

“The victim has lived with the physical and emotional impacts of this assault for almost 40 years,” she said.

“We know people’s circumstances can change over time, and this appeal might be the prompt needed to help close a terrible chapter in someone’s life.”

Detective Acting Inspector Johnston said no piece of information was too small.

Anyone with information should contact Crime Stoppers on 1800 333 000 or submit a confidential report online at www.crimestoppers.com.au.