In my eleventh day of hotel quarantine, I have no complaints. The challenges for physical and mental health are obvious, and those are for each individual to cope with. A nurse is at the other end of the phone if I need someone, other than family and friends, to talk with.

Using hotels for this purpose has been deemed a least-worst solution to the need to isolate returned international travellers. It might be overkill in my case – I have been working in a COVID bubble in Japan since July 19 reporting on the Olympics, submitted 23 negative COVID tests in the 25 days prior to entering hotel quarantine in Sydney and two more since – but the blunt instrument of quarantine is obviously one thing that has kept Australia’s infection rate lower than most of the world’s. The current outbreak, of course, is believed to have started from a leak out of hotel quarantine operations, which emphasises both the flaws and the necessity of this model. 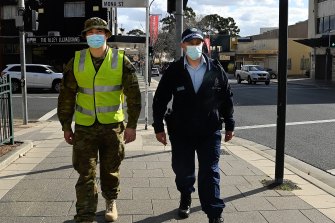 Lockdown is normalising the presence of police and the defence force in Austrralian lives,Credit:Kate Geraghty

While the overall principle is sound, the improper, politically motivated use of institutions and symbols of authority to enforce it leaves me with increasing concerns as I peer out through the tunnel of my lockdown into yours. If I wanted to join you and left my room, caught the lift and tried to exit, I would quickly realise that I am not a guest but an internee.

At the start of the hotel quarantine process, when you walk through Sydney Airport and board your hotel-bound bus, you realise that you have passed into the hands of the state police and the Australian Defence Force. Suddenly, everyone is wearing a uniform. My escorts were friendly and polite, but I didn’t quite grasp that I was under armed guard until it had already started.

Once in your hotel, you are under the supervision of police and treated as an unclean person. Food fairies knock on your door and leave your food outside. You are required to put on a facemask every time you open your door, even when there is nobody there – and in all these days I have never once seen one of the food fairies, they disappear so quickly. Your laundry will not be touched.

Again this caution is understandable, but it does turn a hotel into a law enforcement facility and the staff into enforcers and punishers. Guests take out their frustration with scathing posts on TripAdvisor. Good hotels promise to do better. But they were not designed to be jails – no more than they were designed to be sterile health facilities – and nor were their poor staff trained to be jailers. 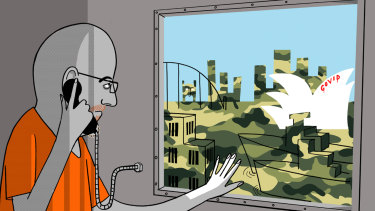 Police and soldiers stand guard in case anyone is stupid enough to try to leave. When a soldier brought me to my room on day zero, I asked him jokingly what he would have been doing if not this – defending the country from invasion? He said no, he was just a reservist, he would be doing some other box-ticking exercise in logistics, so hotel quarantine made no difference to him. Like the police, he was friendly and polite.

This is the undeniable legacy of lockdowns: the normalisation of the police and the military in our lives, their constant presence as a mechanism of social control, until we don’t even register that they are still there.

Outside, in the rest of the locked-down population, state police ministers urge people to call Crimestoppers to dob in anybody they see breaching lockdown rules. Now, we’ve all been in the situation where a neighbour is having an unlawful gathering or too many sun-worshippers are congealing on the beach or someone from out of town has suspiciously shown up. It irritates you intensely to see people disobeying public health orders when you and so many others are suffering the lockdown pains of doing the right thing. You might be tempted to call the police. It’s easier than confronting the people yourself. But really? What wedge is this the thin end of?

When I see a state police minister impersonating Lenin – a good citizen is a good spy – it reminds me never to give in to that sugar hit of vindicated resentment that comes from dobbing in teenagers because there are five of them instead of two. You can always make the case that one instance of dobbing in people, stopping one party, possibly prevents the spread of infection and is a good thing. You can agree with your police minister that they cannot enforce the law fully without the cooperation (that is, the complicity) of the general populace. There will always be cheats, and you can help keep the infection rate down if you dob in the cheats.

But at what cost? These lockdowns around Australia have persisted for a year and a half, with longer to run, long enough to change perceptions and habits. If politicians and police want to turn people against each other, the pandemic offers a perfect conveyance: with just one anonymous phone call, you can get someone fined and make yourself feel better.

You can also make yourself look like a goose. I heard about a hairdresser who’s been making the best out of her salon being closed to practise on a dummy while getting online lessons. She has been visited by police four, count it, four times, after four separate tip-offs from the public. And the dummy is …

As with the police, the use of the military for its “logistical prowess” has already been normalised. Why it took a camouflaged soldier to escort me in a lift and to my room is anyone’s guess and is as necessary as General John Frewen, wearing his uniform, being the face of the federal vaccine rollout. But a politician has never seen a shade of khaki that they don’t fall in love with, and COVID has only entrenched Australians’ trust in those uniforms.

How do we know that the legacy of these few months won’t be long-lasting, and won’t sew itself into the fabric of Australian life, so that arms-bearing functionaries become as common here as they are in most of the world?

The present lockdown coincides with an unrelated event, the final failure of the military adventure in Afghanistan. Eminent men scratch their heads and say that nobody could have seen this coming. (Maybe they didn’t, but tens of thousands of Australians protesting against the “war on terror” did, and were derided for it.) John Howard, who sent young Australians to fight and die because he “owed” George W. Bush and the United States, says Afghanistan can’t even be called a failure (echoing the famous cartoon of Dick Cheney’s gravestone: “Still winning.“) Australian service people who might be suffering a loss of self-esteem are reassured that the 20-year war was very good for enhancing their logistical and fighting capability, as if the whole thing were an important skills-improvement exercise for us. (This notwithstanding that thousands of Australian soldiers knew it was a strategic screw-up while they were there, did not believe in the war, and the improvement of their skills was not a reason to fight but a meagre consolation for the loss of their mates’ lives.)

The salient fact is that, after this 20-year snafu, after the alleged war crimes, which are still to play out in the criminal courts once the Brereton Report’s findings are made public, Australians’ respect for the uniform is as high as it ever was. Judging by what’s happening in this pandemic, it is higher than it was before Afghanistan. Our love of authority is strengthening by the day, and it is a groundswell that cowardly politicians have always been eager to ride.

If you think uniforms, weapons and handcuffs are the solution to every problem, the COVID pandemic has provided you with your moment. As long as your purpose is to heighten control and authority and coercion, you will be heard. (Unlike if you believe weapons are a failure: protesting Australian protesters made one big Crimestoppers call at the beginning of the “war on terror” because they saw a new Vietnam ahead, but their call was not taken.) If you’re upset about Afghanistan in these emotionally labile times, be upset about the persistence of the belief that uniformed men with guns will solve every problem.

Once I get out of quarantine in a few days, I will be released into a situation that I have heard wittily described as “hotel quarantine plus dog-walking”. The difference is, I won’t need a soldier to let me out the door, and I won’t be arrested by police if I’m caught taking a breath of fresh air. But if I see anything that makes my blood boil, they will be only too eager to take my call.