Victoria Police believe they’ve smashed a major crime syndicate involved in the theft of more than $7 million worth of cigarettes following a series of raids on properties in Melbourne’s west and the arrest of two men.

A B-double truck loaded with thousands of cigarette cartons was stolen from a transport distribution centre in Altona on September 5 in what was believed to be one of the state’s most lucrative heists. 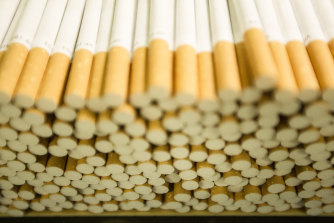 A cigarette truck was stolen from an Altona address in September.Credit:Nic Walker

A taskforce of detectives from the Hobsons Bay crime investigation unit launched raids on 14 properties in Altona North, Hoppers Crossing, Laverton North, Niddrie, Roxburgh Park, Sunshine and Williamstown over the past week, following a major investigation of the robbery.

Ghazi Haddara, 32, from Hoppers Crossing, was charged with two counts of theft to the value of approximately $7.3 million and failing to provide police with a phone PIN number.

Mr Haddara was granted bail and was due to appear at a filing hearing in the Melbourne Magistrates Court on Friday.

A 33-year-old Sunshine man was also charged with two counts of possessing the proceeds of crime and failing to provide police with a phone PIN number. He was granted bailed and is due to appear before the Melbourne Magistrates’ Court in September next year.

Police seized more than $240,000 in cash in the raids, along with 480 cartons of cigarettes, 400 pouches of loose-leaf tobacco and 190 packets of prohibited import brands of cigarettes.

The raids also uncovered weapons, including an imitation assault rifle, .40 calibre firearm magazine and ammunition, along with gold and silver ingots, 25 vials of steroids and electronic equipment.

A police spokeswoman said the investigation would continue and anyone with information about criminal activity should phone Crime Stoppers on 1800 333 000 or via www.crimestoppersvic.com.au