Police release picture in hunt for jet skier who hurled homophobic abuse at swimmer, in her 40s, at popular beach in Dorset

Police have released a picture in the hunt for a jet skier who hurled homophobic abuse at a swimmer at an exclusive Dorset beach.

The woman in her 40s was swimming in the sea at the Mudeford sandspit, which is home to Britain’s most expensive beach huts.

She then challenged a group of people riding jet skis dangerously close to swimmers.

A man from the group hurled verbal abuse at the swimmer, including homophobic comments, and splashed her with water.

The incident happened on July 18 at Mudeford, close to the beach huts.

Police have issued an image of a man they want to speak to in connection with a hate crime.

He is bearded and is wearing a hat, sunglasses and shorts in the photo. He appears to be riding a jet ski with a child.

‘Dorset Police takes hate crime very seriously and we have been carrying out a number of enquiries into this incident.

‘I am now in a position to release an image of a man we would like to speak to.

‘I would urge anyone who recognises him to please come forward.

‘I am also keen to hear from any witnesses to the incident who have not already spoken to police.’

A hut at Mudeford sandspit set a new record in July last year when it sold for £330,000. 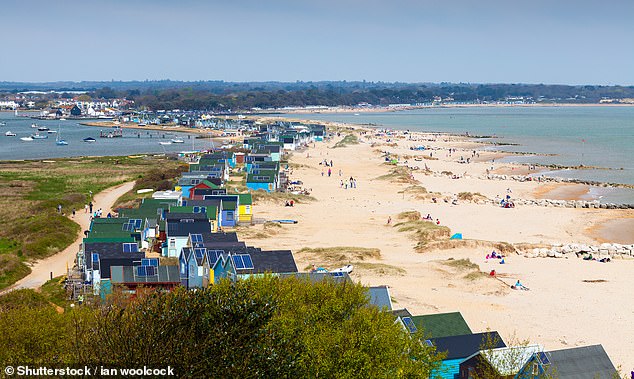